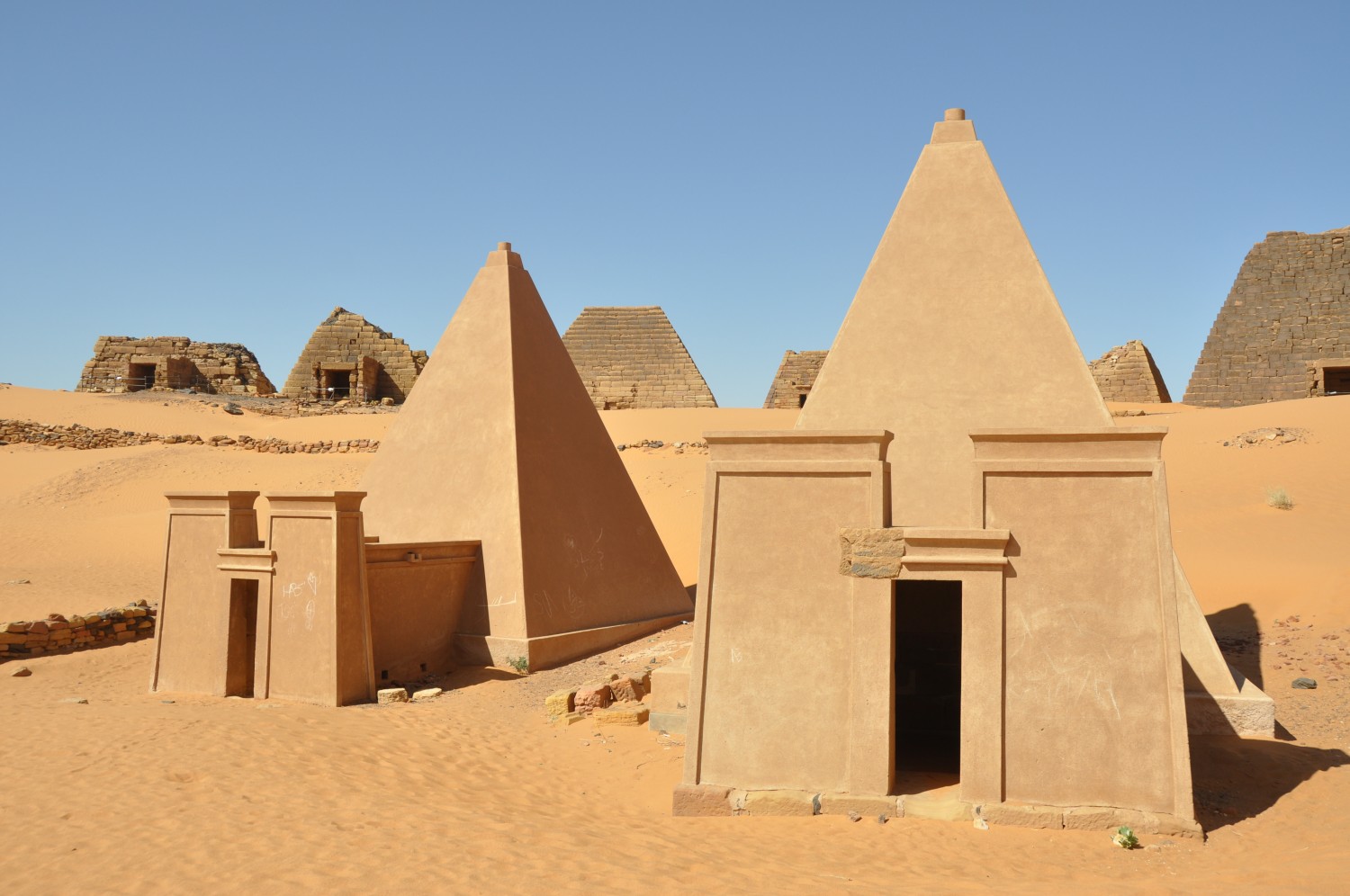 The point of my trip was to travel over land as much as possible. Hitchhiking, (mini)buses, trains, boats. But when I left Belgium I was sure to fly at least one time. I would go from Egypt to Ethiopia by air as to avoid travelling in Sudan, which was said to be very unsafe.

As it turned out, not going there would have been a big mistake!

I was met by the most friendly, generous and hospitable people on my trip. Which was emphasized by the fact that I just came from Egypt where I got charged up to three times the price for anything, was tricked into a perfume shop multiple times, and was harassed constantly by street vendors and taxi drivers. Which, at the time, I had gotten used to, but it was a breath of fresh air to get to Sudan.

I almost didn't get into the country because of a small stamp in my passport.. the Israel one. Luckily the diplomats in the consulate in Aswan rather kept the $50 than deny me my visa :). So on the last day of January 2016 I got on the boat and sailed from Aswan to Wadi Halfa across lake Nasser. 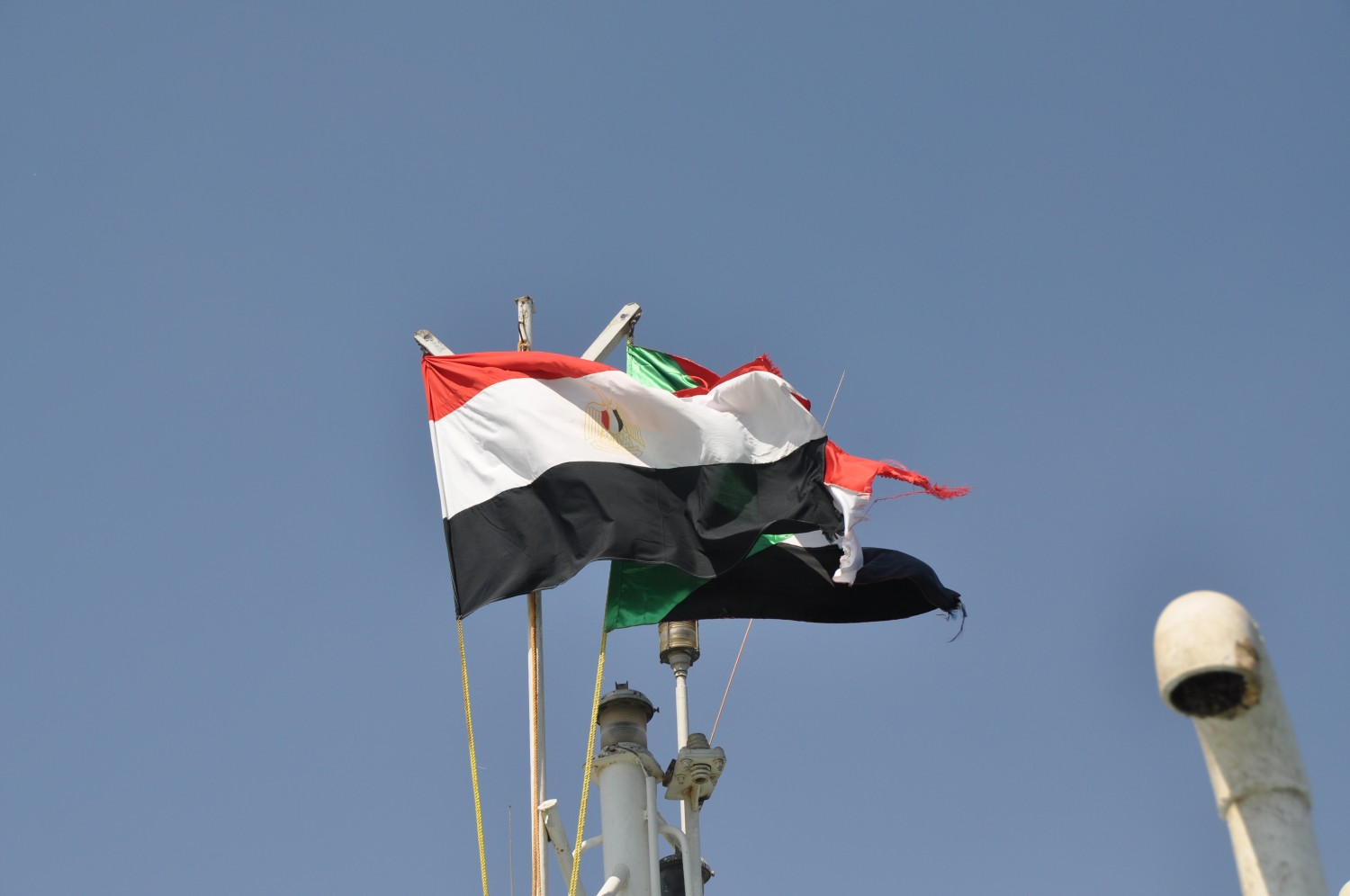 Flag of Egypt and Sudan 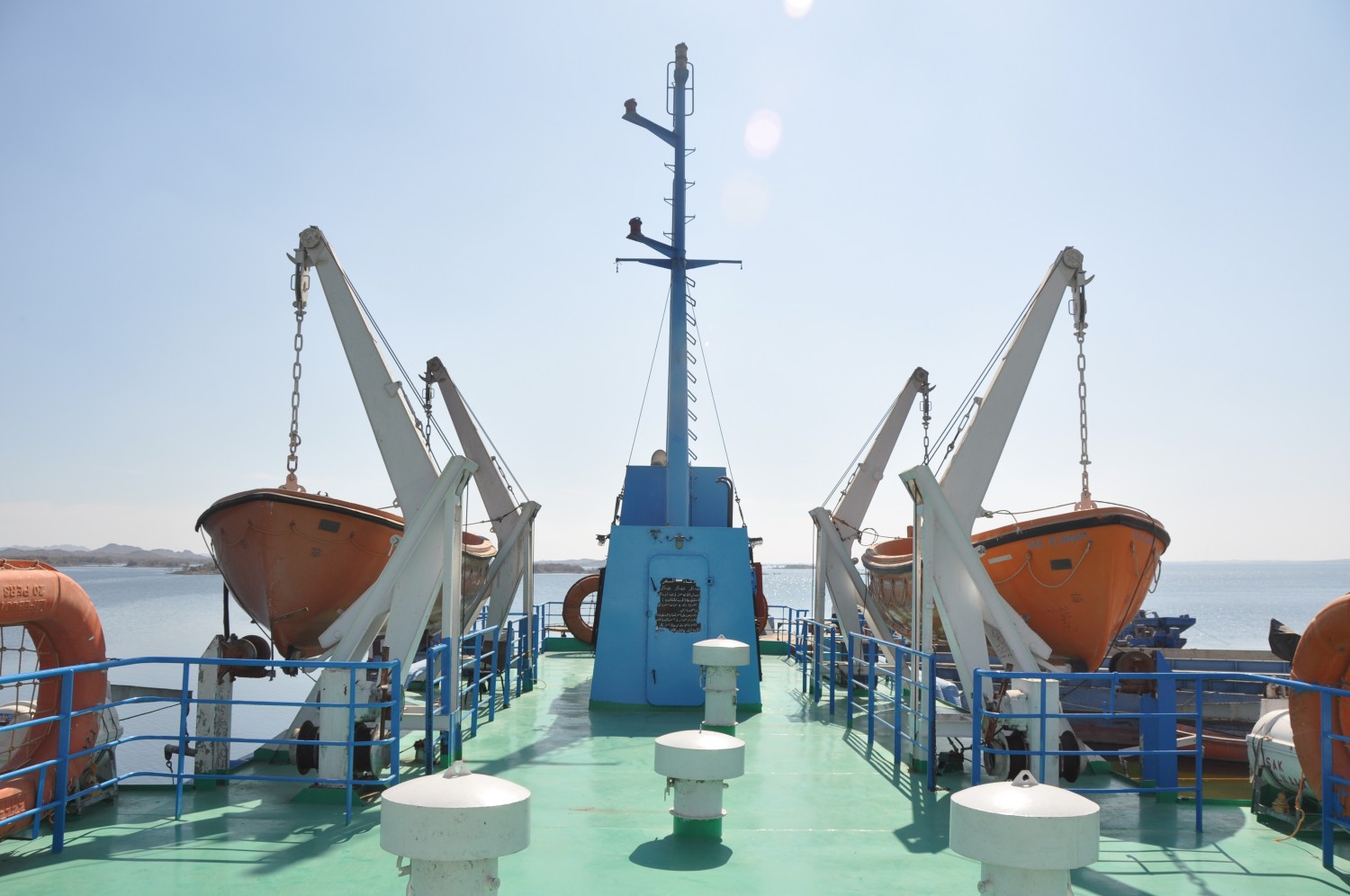 The deck of the ferry 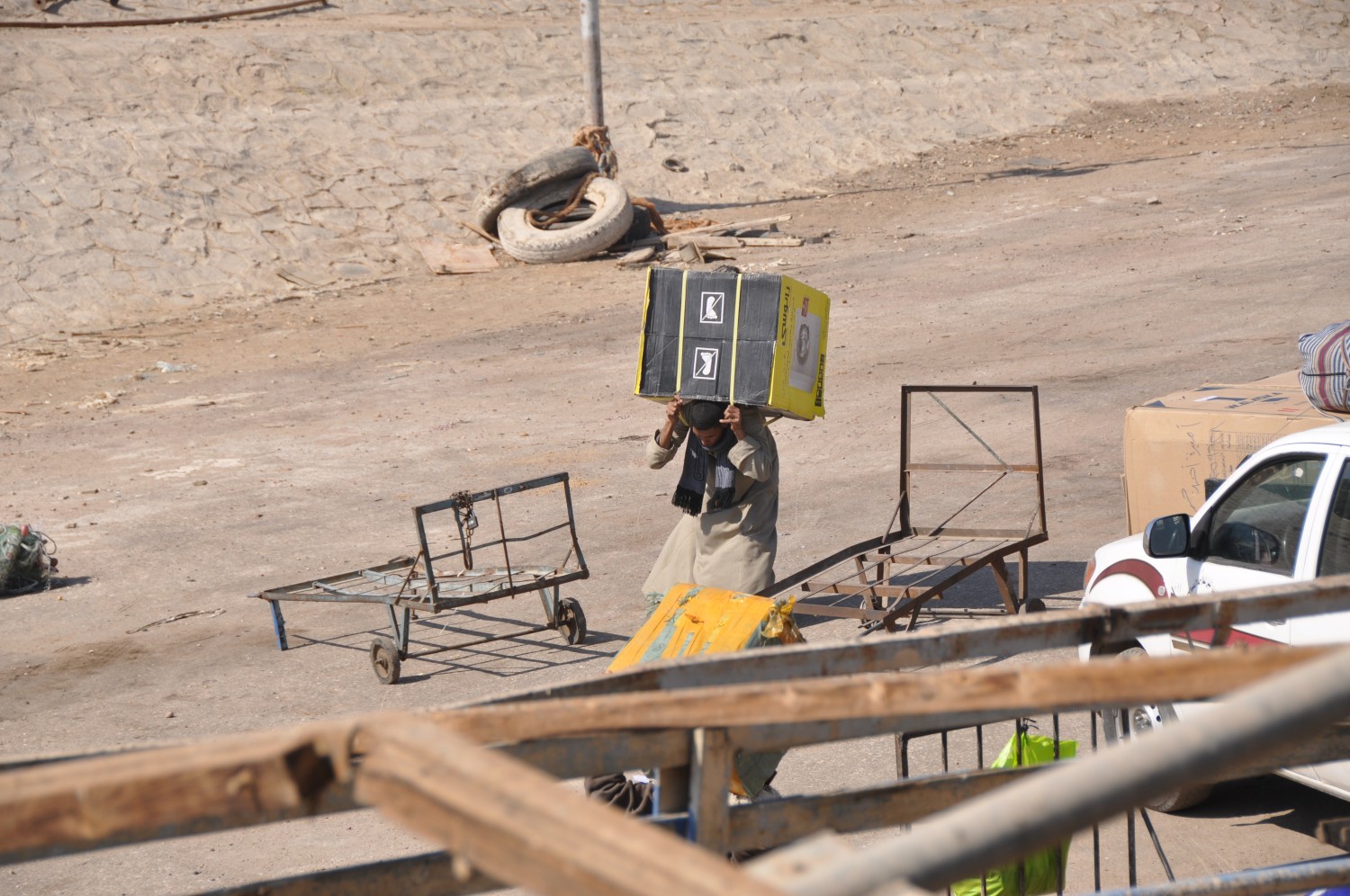 One of the many washing machines that come aboard 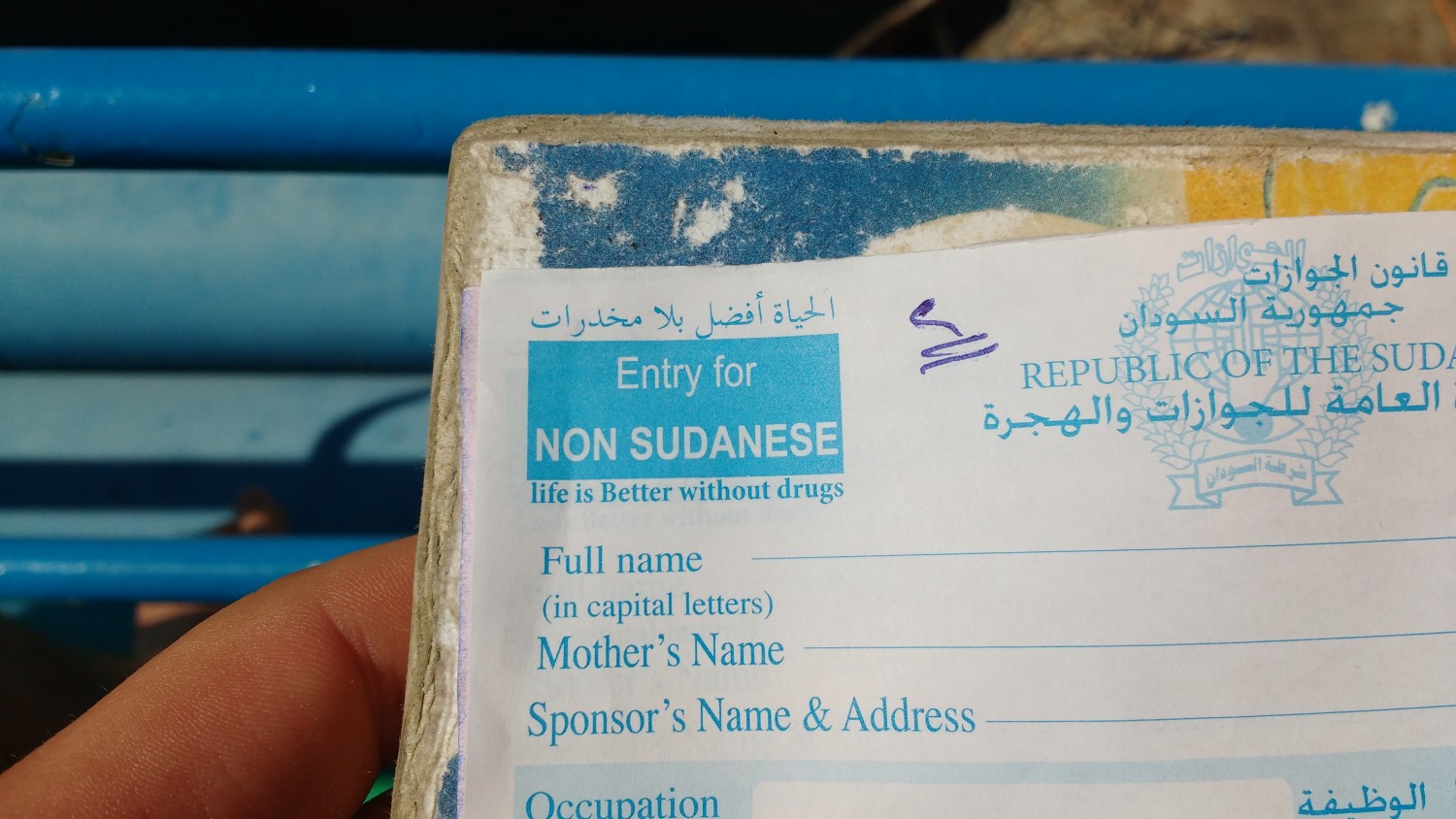 "life is Better without drugs" 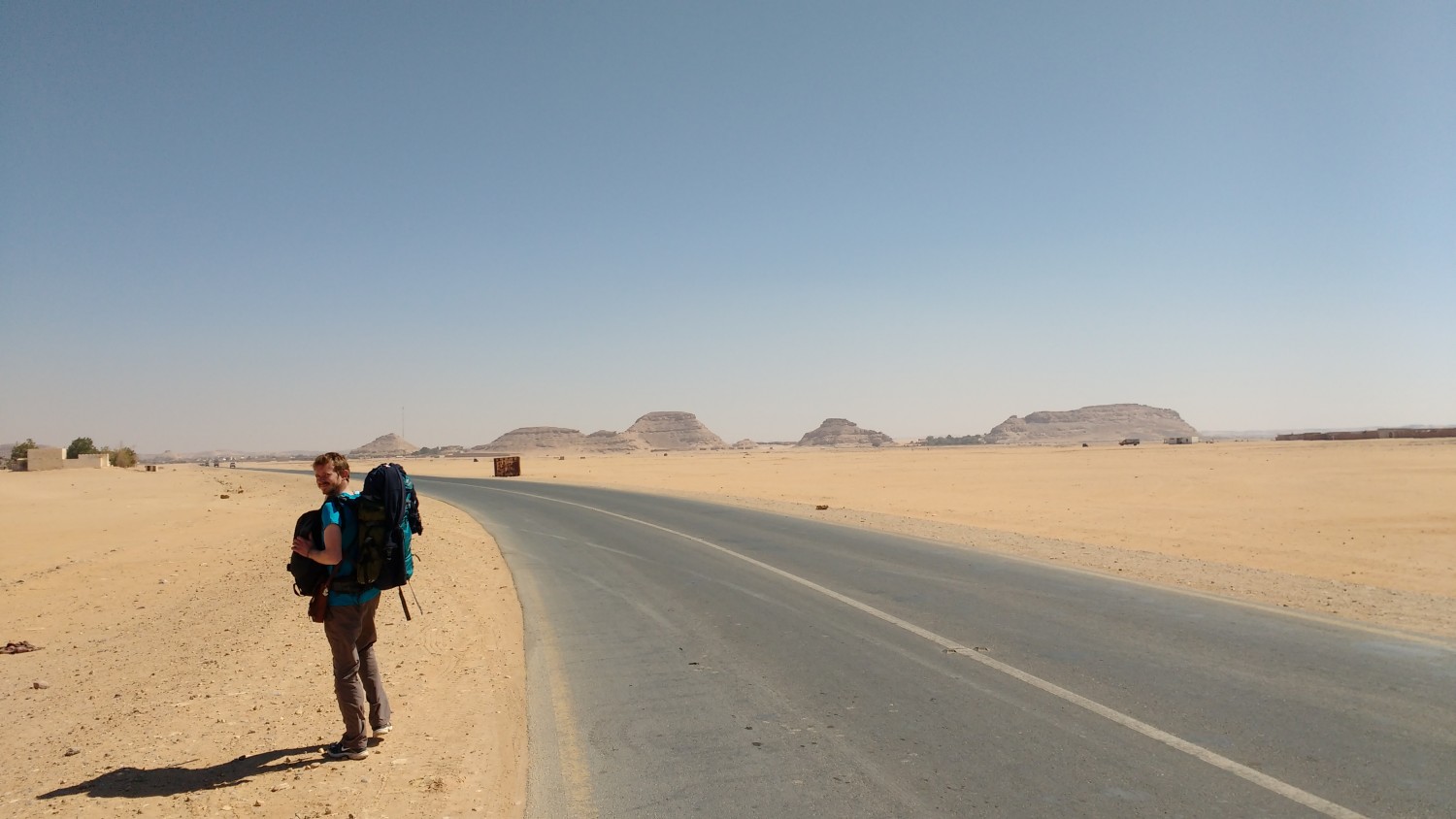 A lot of sand in Wadi Halfa

I decided to go straight to Dongola, the first bigger town . The mini bus that was supposed to take me there took a really long time to get going and I eventually arrived in the middle of the night. Without thinking much I decided to look for a spot to pitch my tent.

There in the dark I met Sadi on his tuk-tuk:

Sadi: "What are you doing here?"
Me: "I want to pitch my tent here somewhere."
Sadi: "You're going to get yourself in trouble, you're staying with me!"

That was the start of an amazing 12 days of generosity and hospitality. 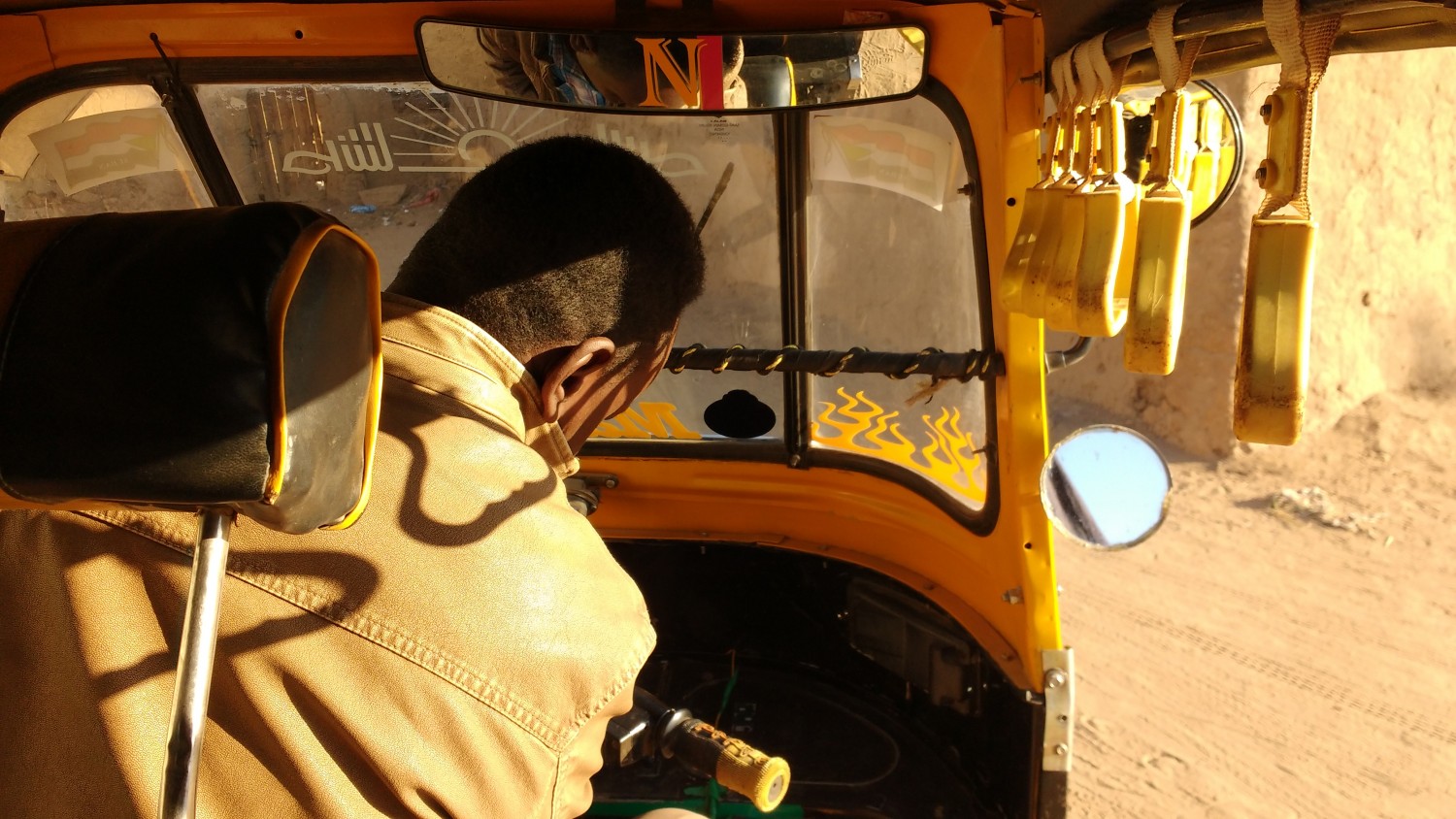 Sadi from Dongola, driving me back in town

The next day Sadi helped me out by showing me the way in Dongola, getting me a sim card and telling me where I could find transport to other places. From there I went to Kerma, where I could visit an archaeological site of an ancient civilization preceding the Nubians now living in the south of Egypt and north of Sudan.

It didn't take long before I got offered a place to stay again. Osman was drinking tea with his friends when they saw me pass by with my camera in hand. They shouted at me to take some pictures of them. Then invited me for tea and dates. And then said I could sleep at Osman's house. 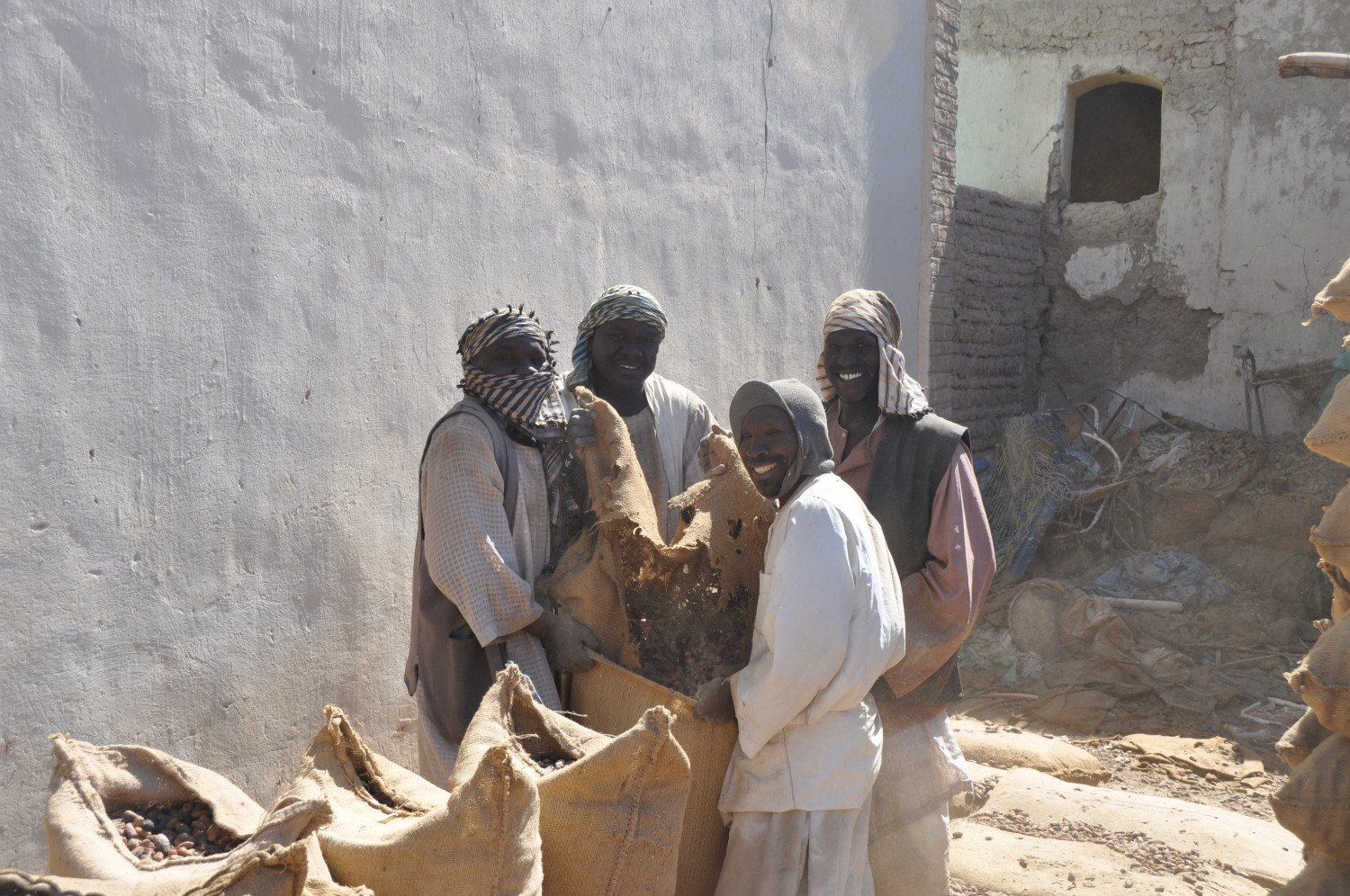 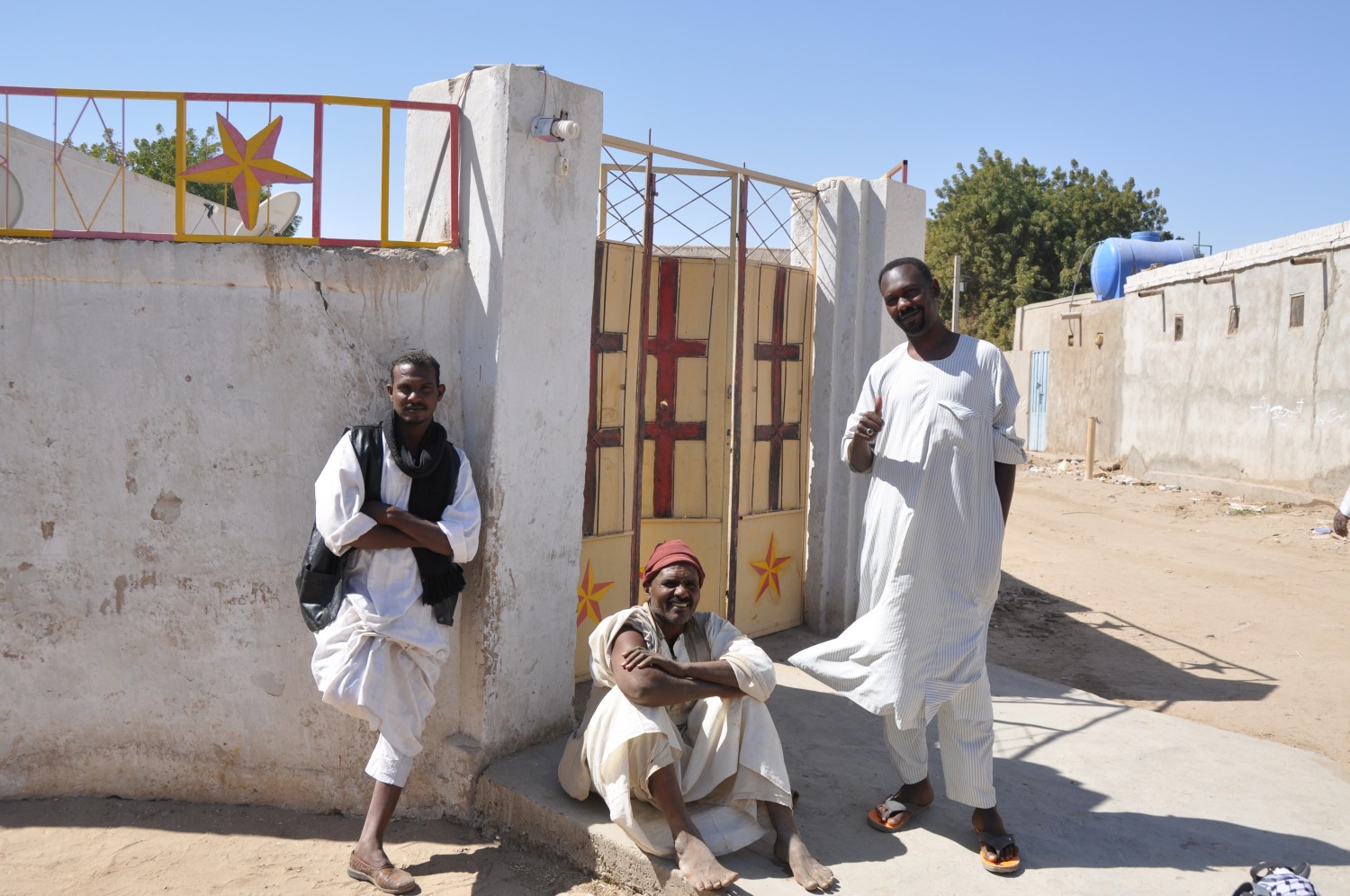 My host Osman (عثمان) on the right

Osman showed me around, drove me to the archaeological site, paid for the entrance then took me back to play some card games with his friends and later at night his brother shaved my beard! What a wonderful experience. And this was only day one in Sudan. 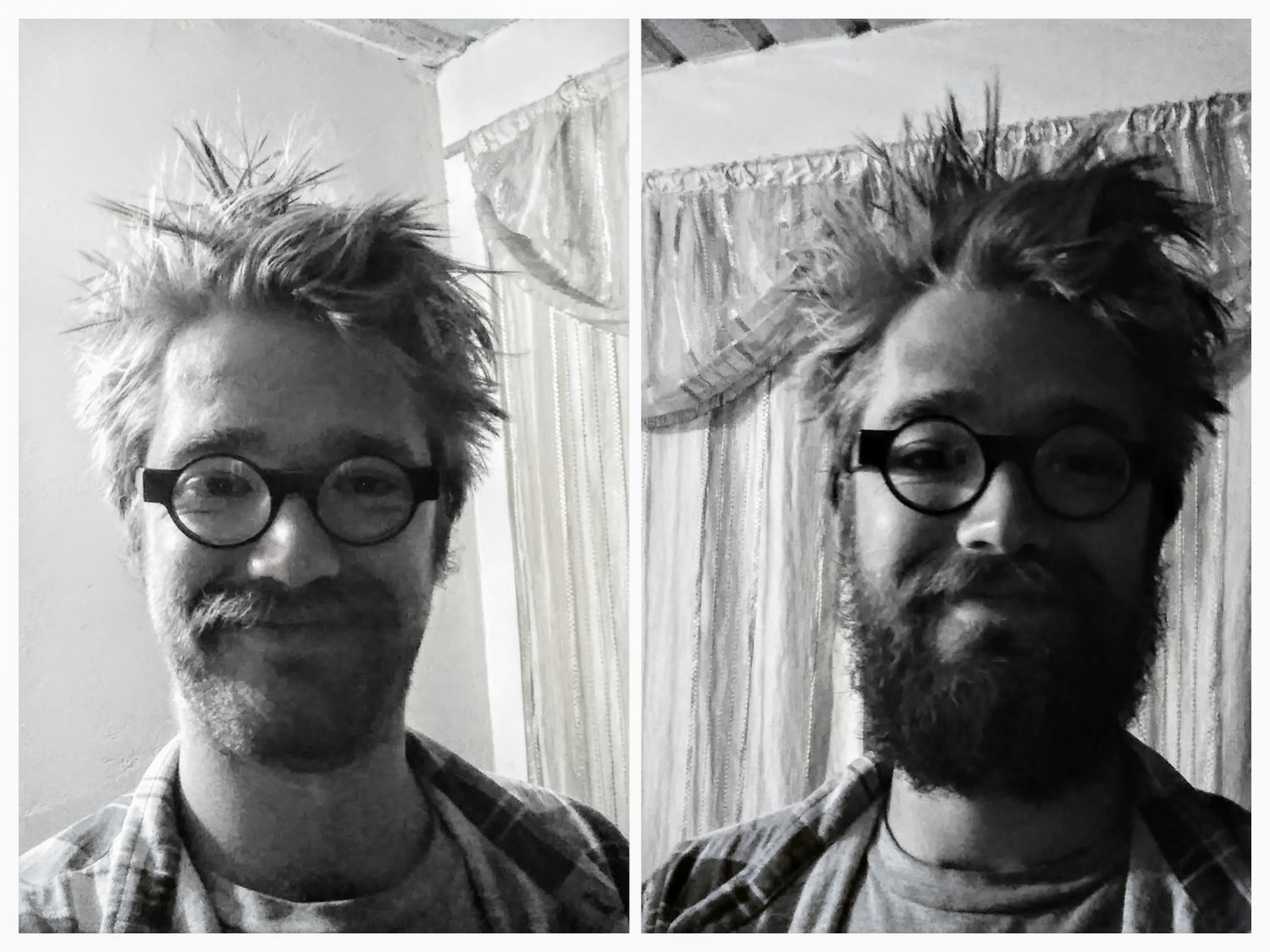 Next stop was Karema, where I was looking for Jebel Barkal, a small hill (jebel means hill) housing a temple. I went around the site quickly before searching for place to sleep. I wanted to camp somewhere between the palm trees lining the Nile. However, I was stopped quickly by a man warning me for mosquito's and crocodiles. Oops..

The second man I encountered was riding a cart pulled by a donkey. Next to it walked a young boy, I presume his grandson. When I asked if he knew where I could pitch my tent he promptly guided me to his house. He went inside, fetched a bed and a mattress, a little table and some water. And voila, I was sleeping and eating again. This time with an amazing view :). 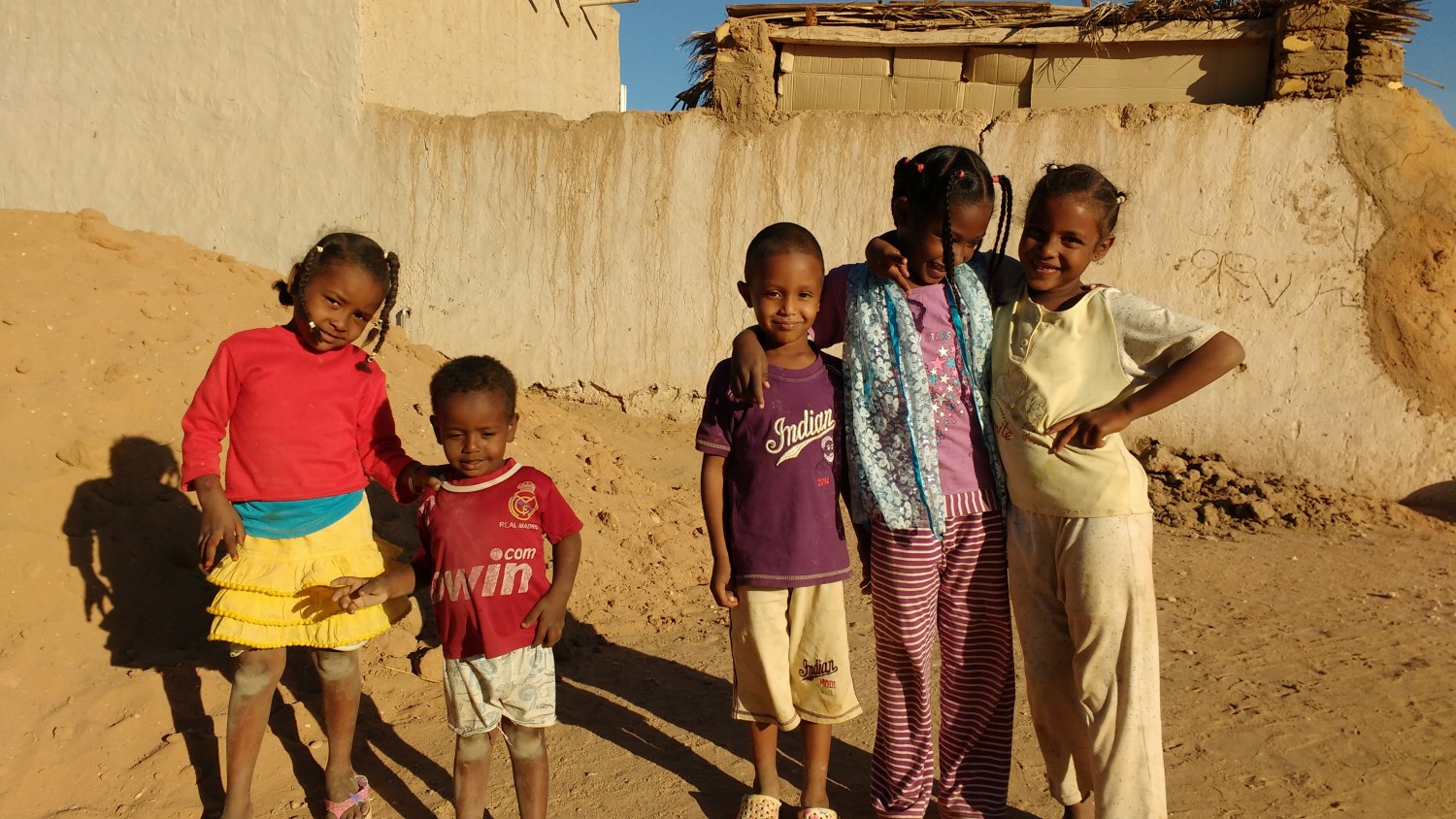 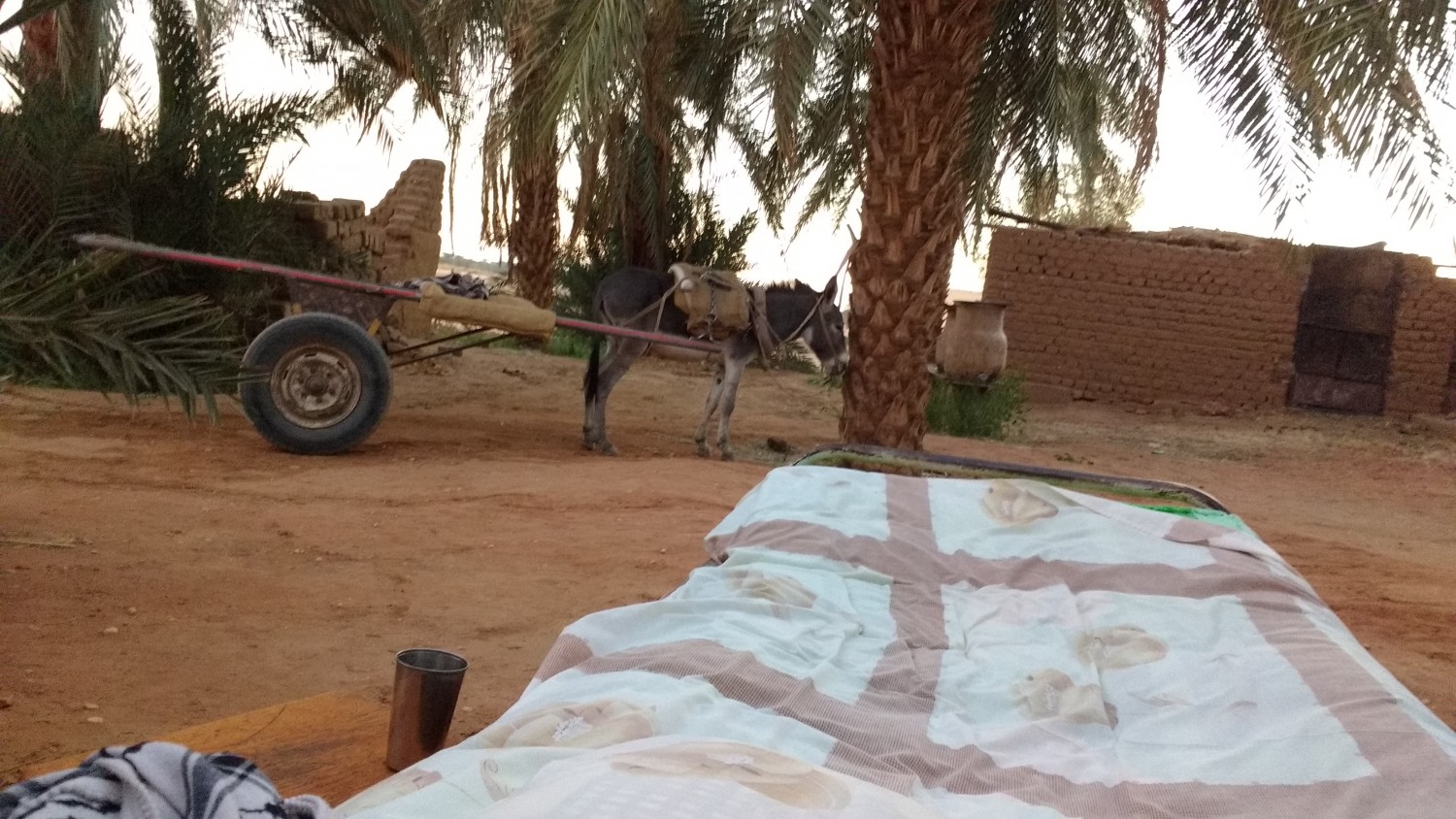 My room with a view

After visiting Khartoum (more on that later) I went to look for the Pyramids of Meroe. These pyramids are smaller than the ones in Gizeh, but are a bit older. So worth a visit!

I was told it was possible to just take a sleeping bag and sleep behind one of the pyramids. But because I left Khartoum a little bit too late in Khartoum, there was no more transport from Shendi that passed by the pyramids.

Luckily I had started talking to Mujtaba (مجتبى), the guy next to me on the bus. After he had helped me looking for transport he instead offered a bed at his uncle's place. We took a taxi there (which he paid for) and I met his cousins and uncles. Then in the morning his uncle drove me on a motorcycle back to Shendi, where he paid for the bus ticket to the pyramids! 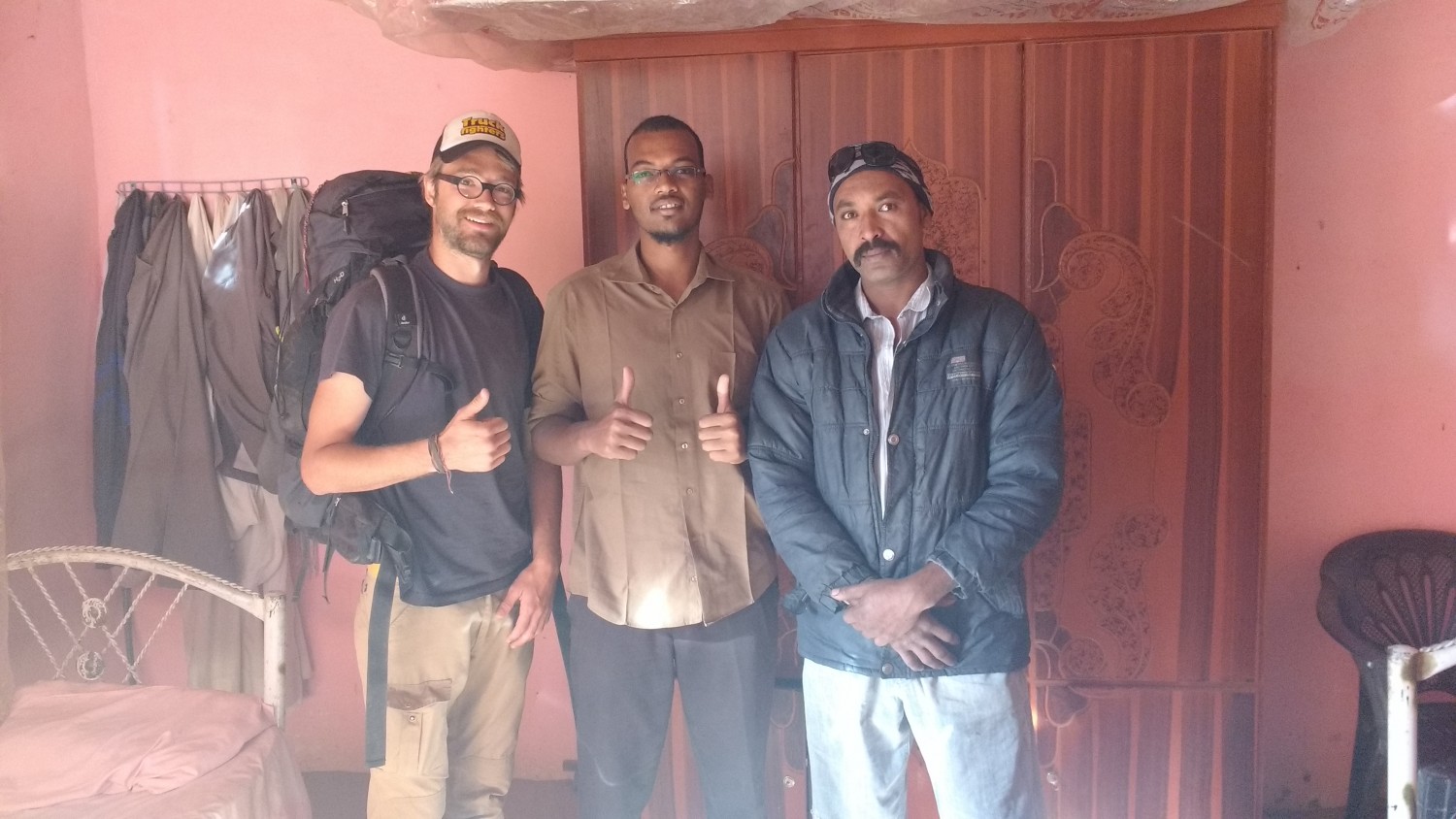 My neighbour in the bus and his uncle 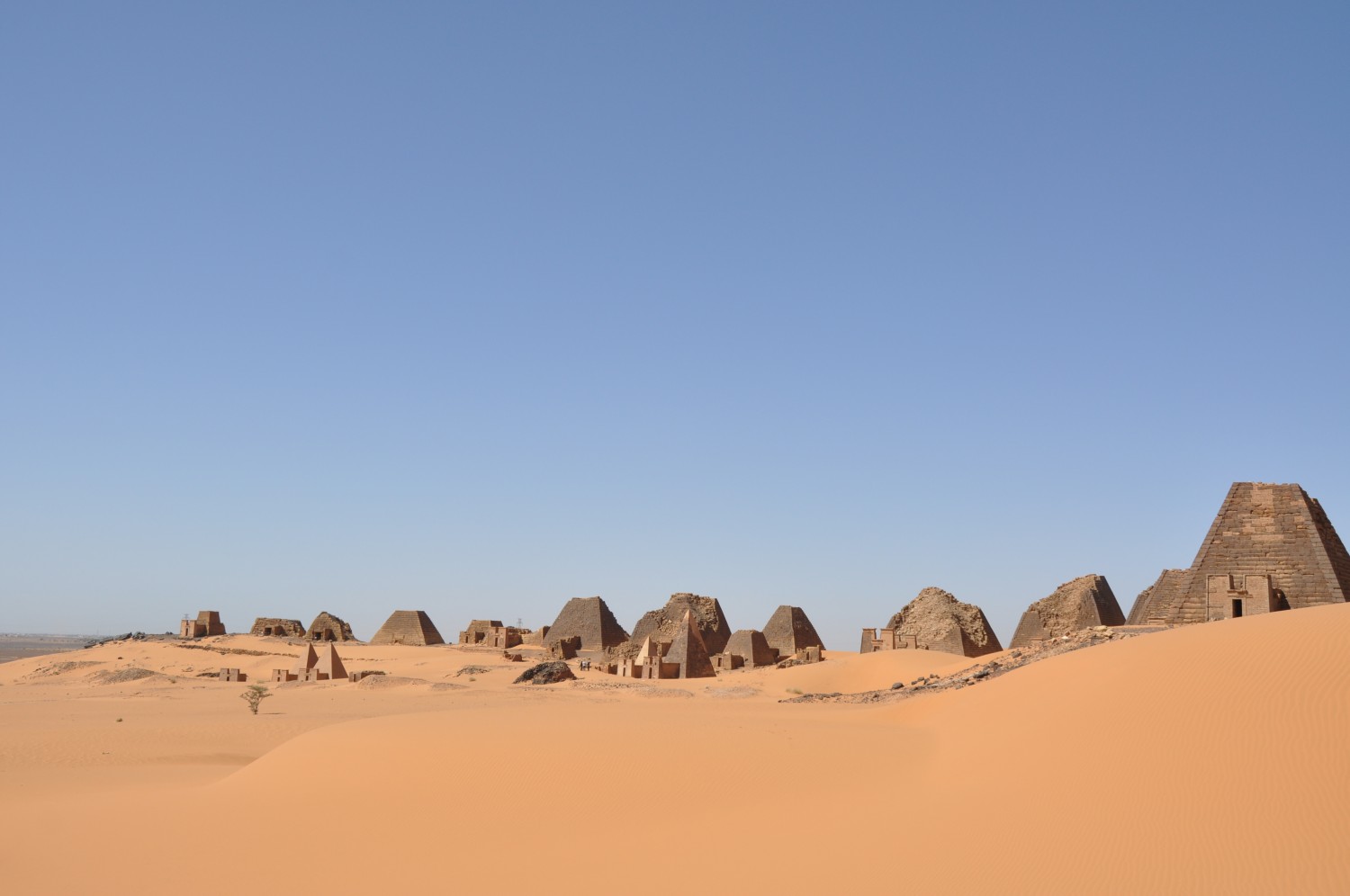 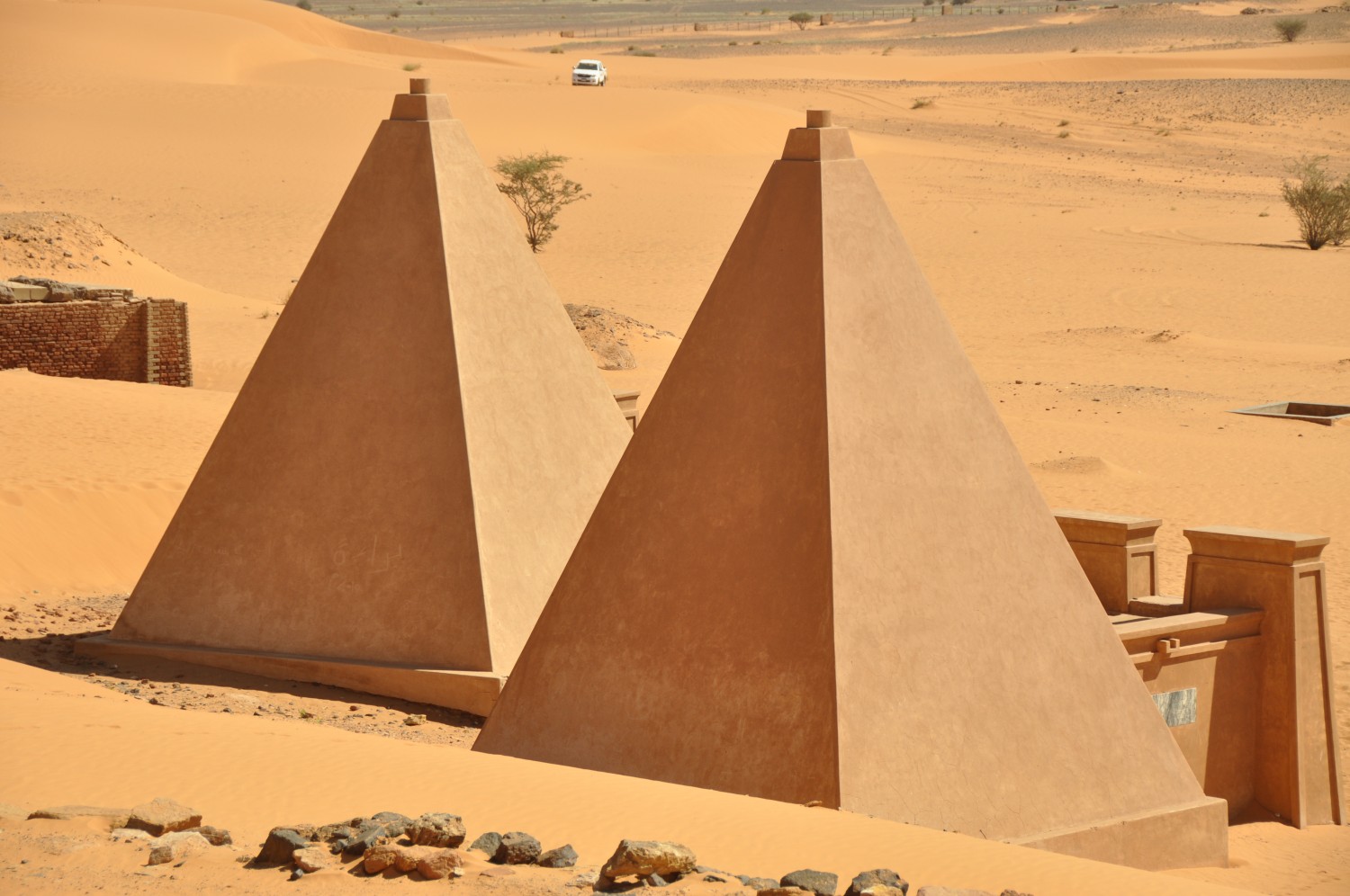 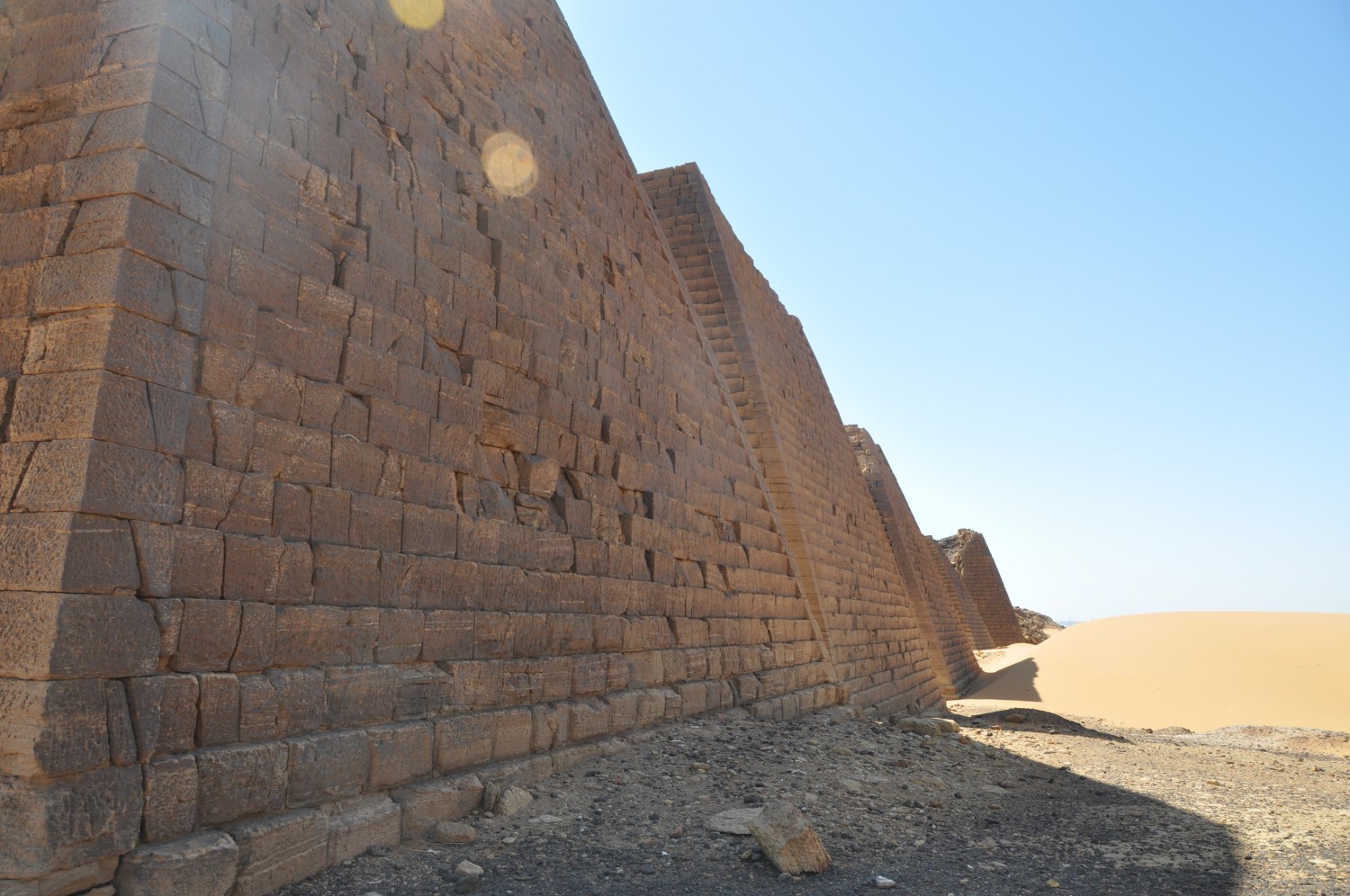 On the way we made a couple of stops to fix the truck, but eventually got to about an hours drive from the capital. The driver explained he had to turn left but I could take a bus right there for 5 Sudanese pounds. He then handed over 20 SDG and waived goodbye.