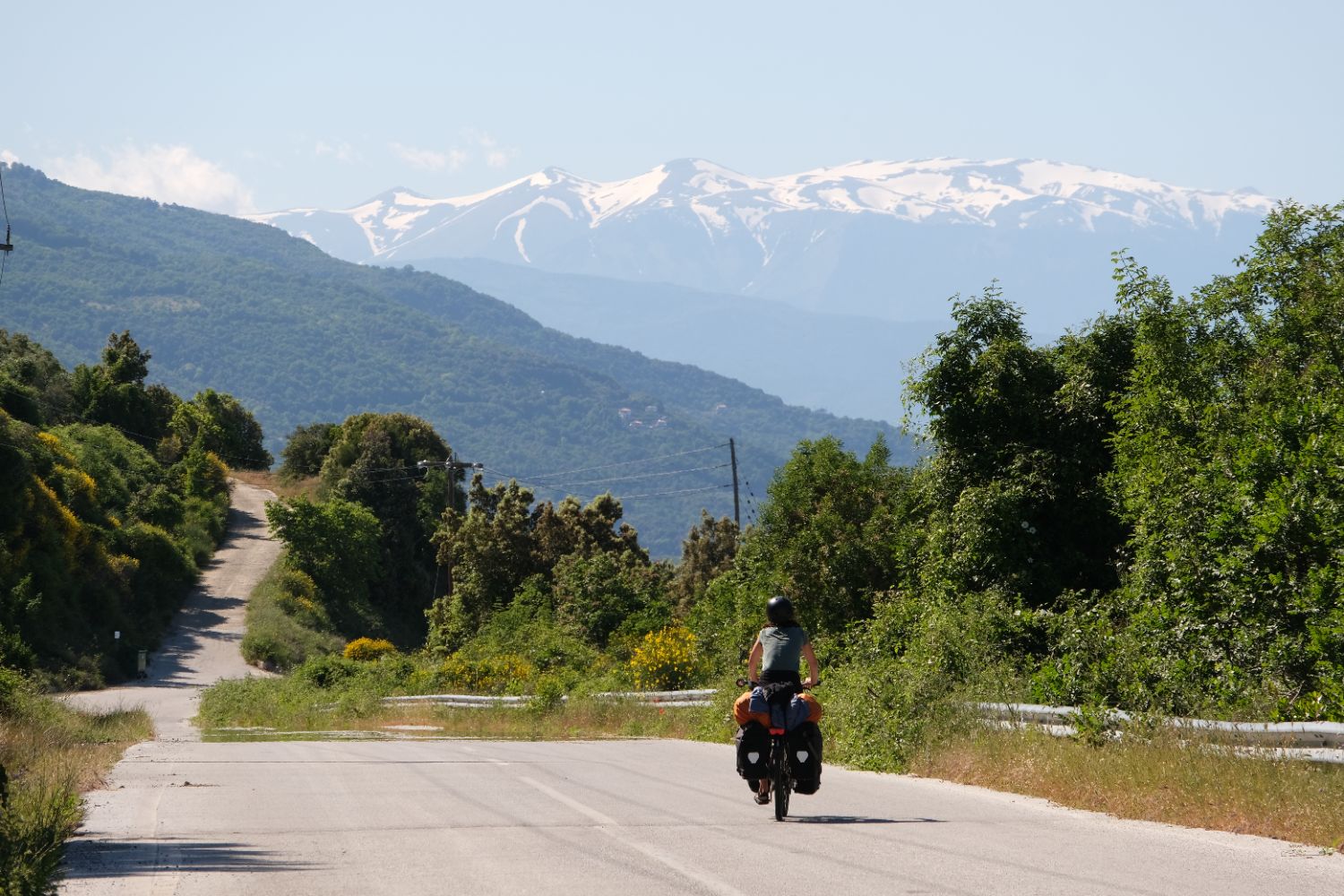 Last week we started the second part of our trip as we handed over the keys of the camper van to my parents and we left Athens on our bicycles. Next significant stop: Istanbul (or, Konstantinopouli for the Greeks). 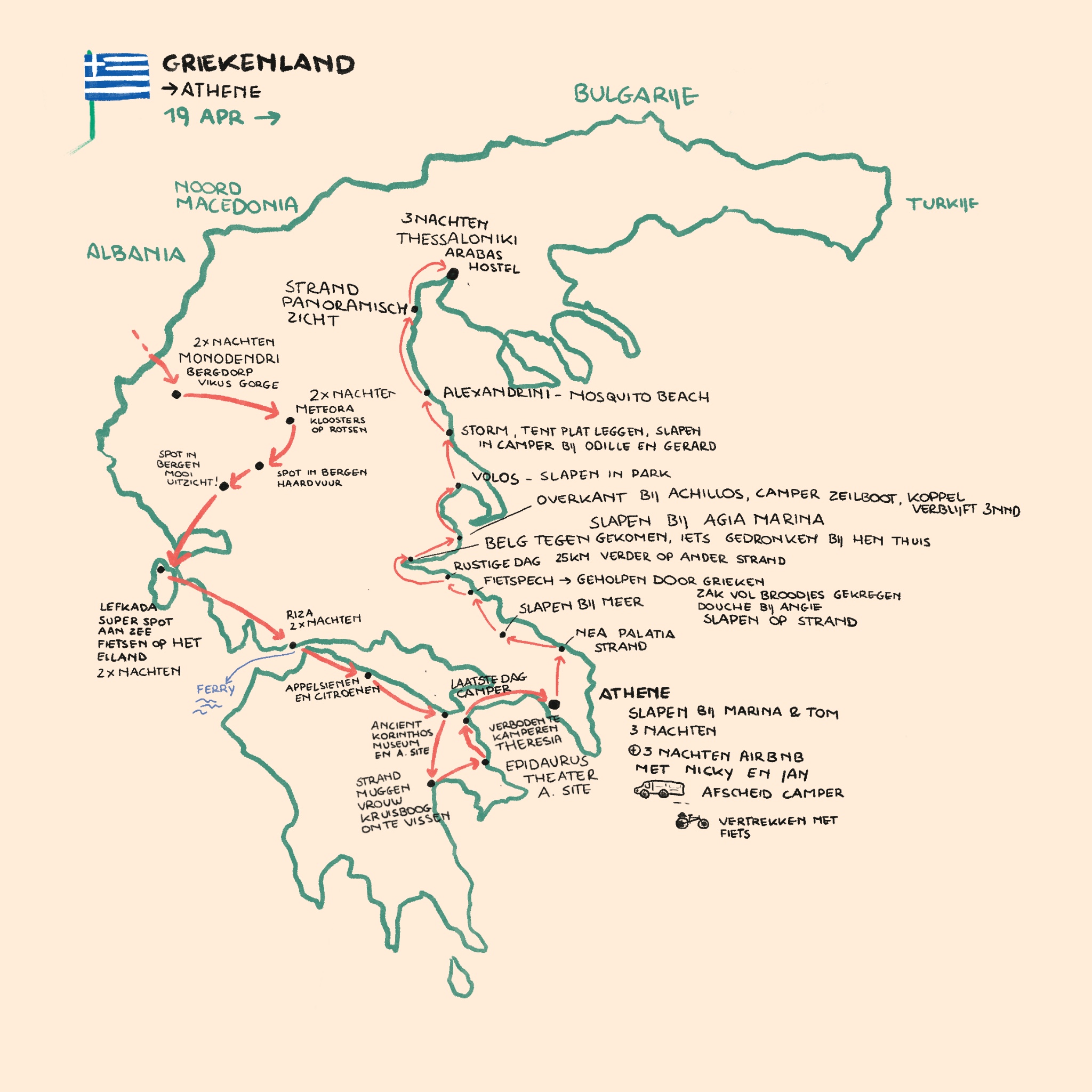 Before we got to Athens we cleaned the van properly and made a selection of stuff to take on the bicycles and stuff to leave behind. It was exciting to be packing up again and preparing for the next part of our trip.

We first met up with some good friends in Athens from my previous pass through the city in 2017, and later met my parents during the weekend. They came over to Athens to visit us again and take up the opportunity to travel back to Belgium with the camper van. 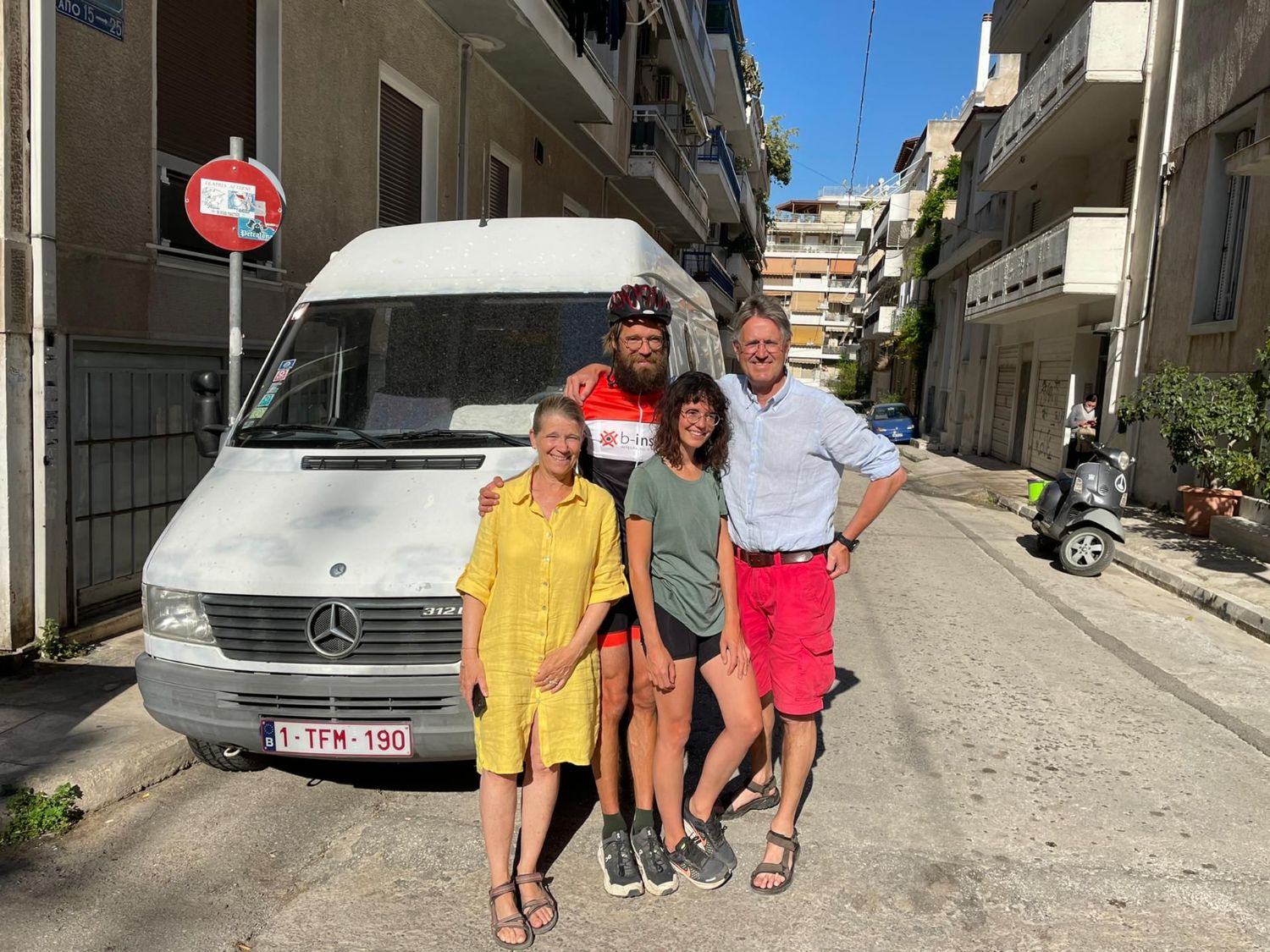 My parents and us in Athens

On our first day, we planned to get to the sea, north of Athens. However, getting out of Athens was not very enjoyable. The sun was burning, I wasn’t feeling 100%, and it took a while to get completely out of the city. But, already within that first stretch of the trip we were met with generosity from locals when we were offered some fruit by a local flower merchant.

We decided it might be a good idea to stay close to the coastline to avoid the mountains and benefit from the showers they have on most of the beaches. This meant we didn’t have to get into our sleeping bags sweaty from the day’s ride. And, because the proper tourist season hasn’t started yet, most places along the coast were still empty.

The first days passed without difficulty and we found nice camp spots along the route. People were friendly and, despite everyone warning us for Greek driving behaviour, the drivers were actually kind enough to honk before passing us widely. 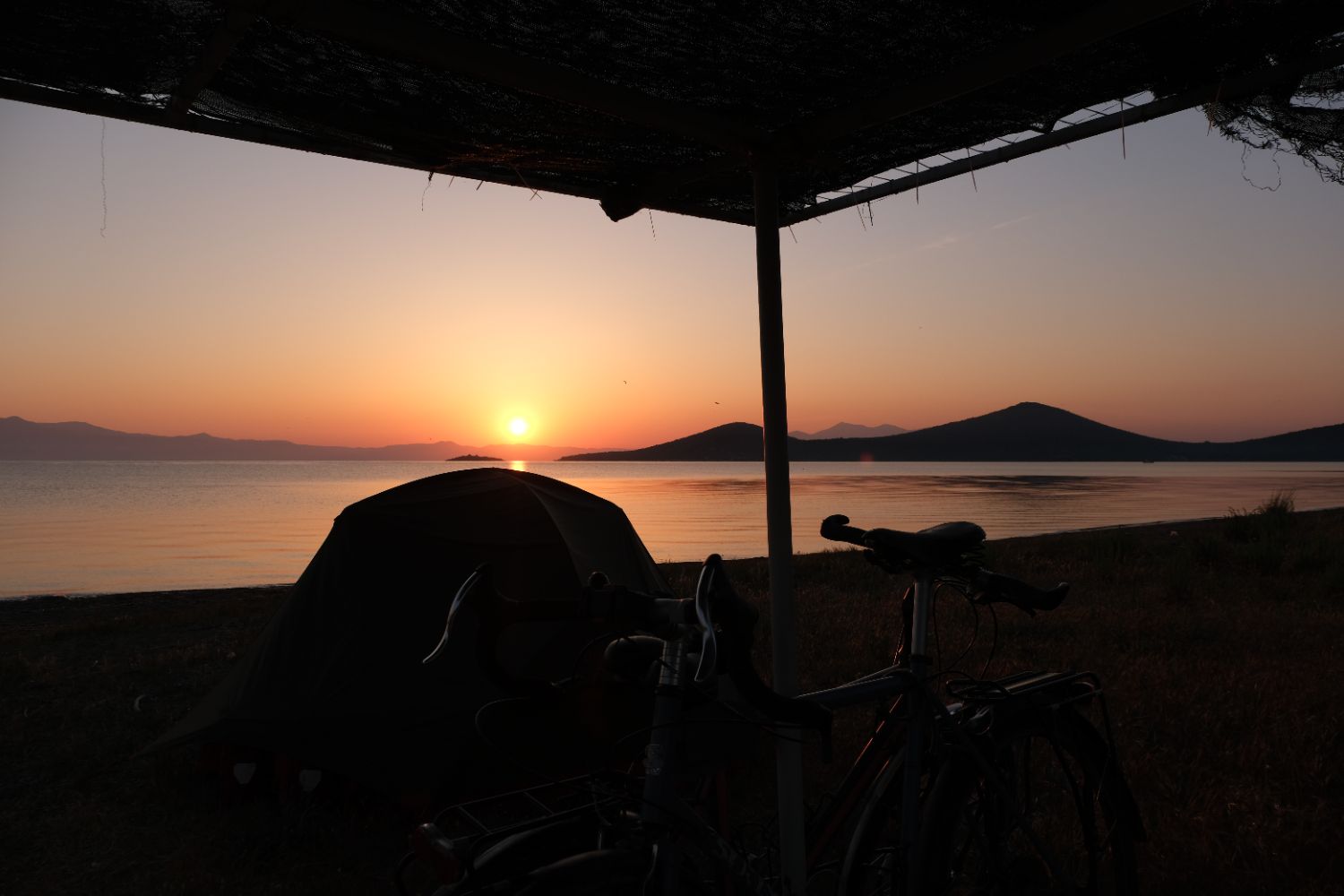 Sunrise over our tent

On the fourth day, I asked to inflate my tires at a local bicycle shop. We only have a small hand pump and I thought my tires could use a bit more pressure. Then, the next day I got a flat tire, with the puncture being on the inside of the tube. I found it weird and blamed it on the too high tire pressure. 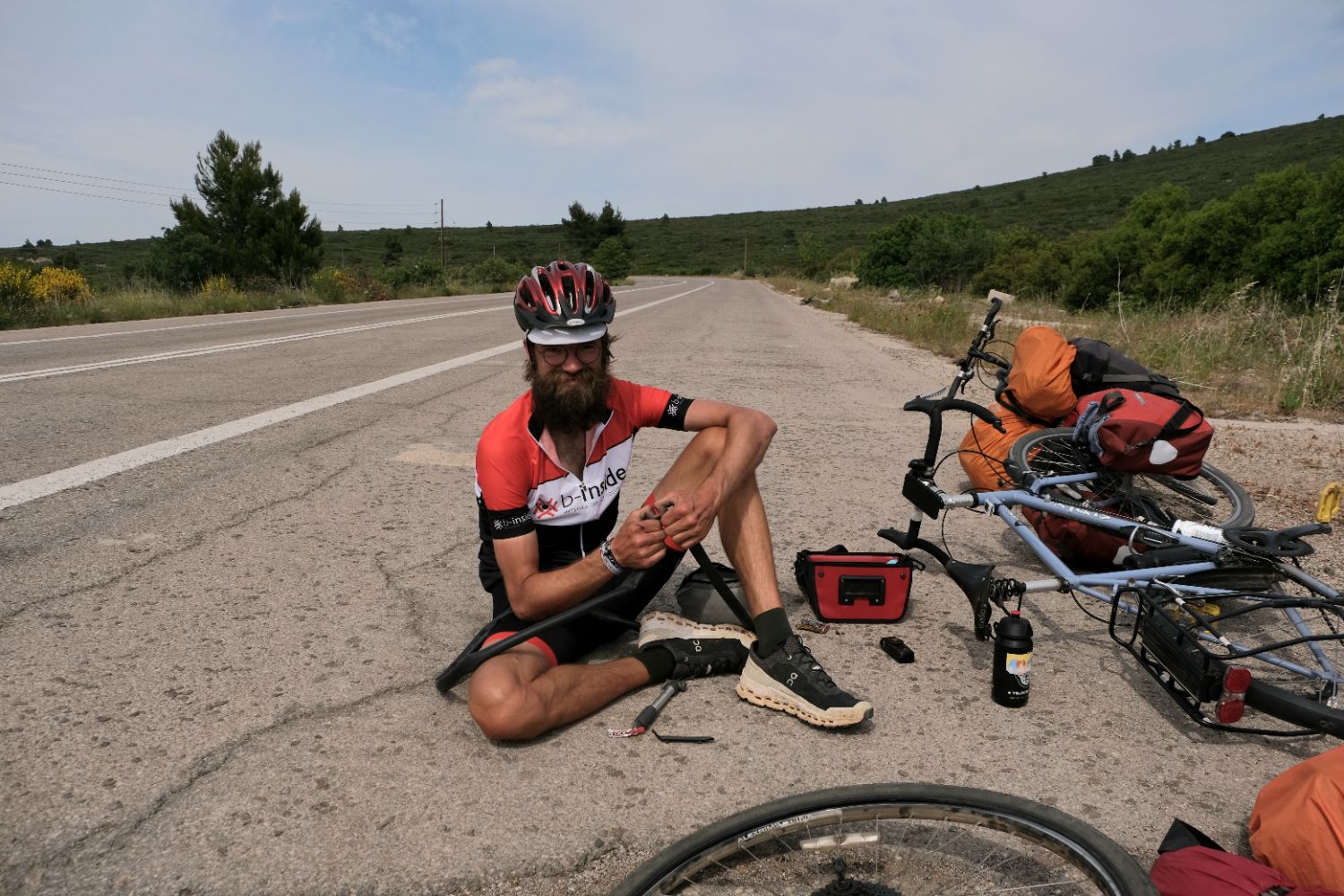 Trying to plug the puncture

I replaced the tube and quickly reduced the pressure in the other tire. After the fix, however, I noticed my tire had become wobbly. I tried fixing it but didn’t have a lot of success.

At that moment, two guys from the next village came to our rescue. They had noticed us and tried to get the tire to straighten out. Also without success, unfortunately. As consolation, one of them invited us to his bakery shop for a coffee.

That turned out to be both very good and a little bit bad. We met his cycling friends, one of them inviting us to her place a bit further for a warm shower. And a tip for a nice place to camp. But, I rarely drink coffee, and had this strong one at the end of the day. So, no sleep for me :-D. 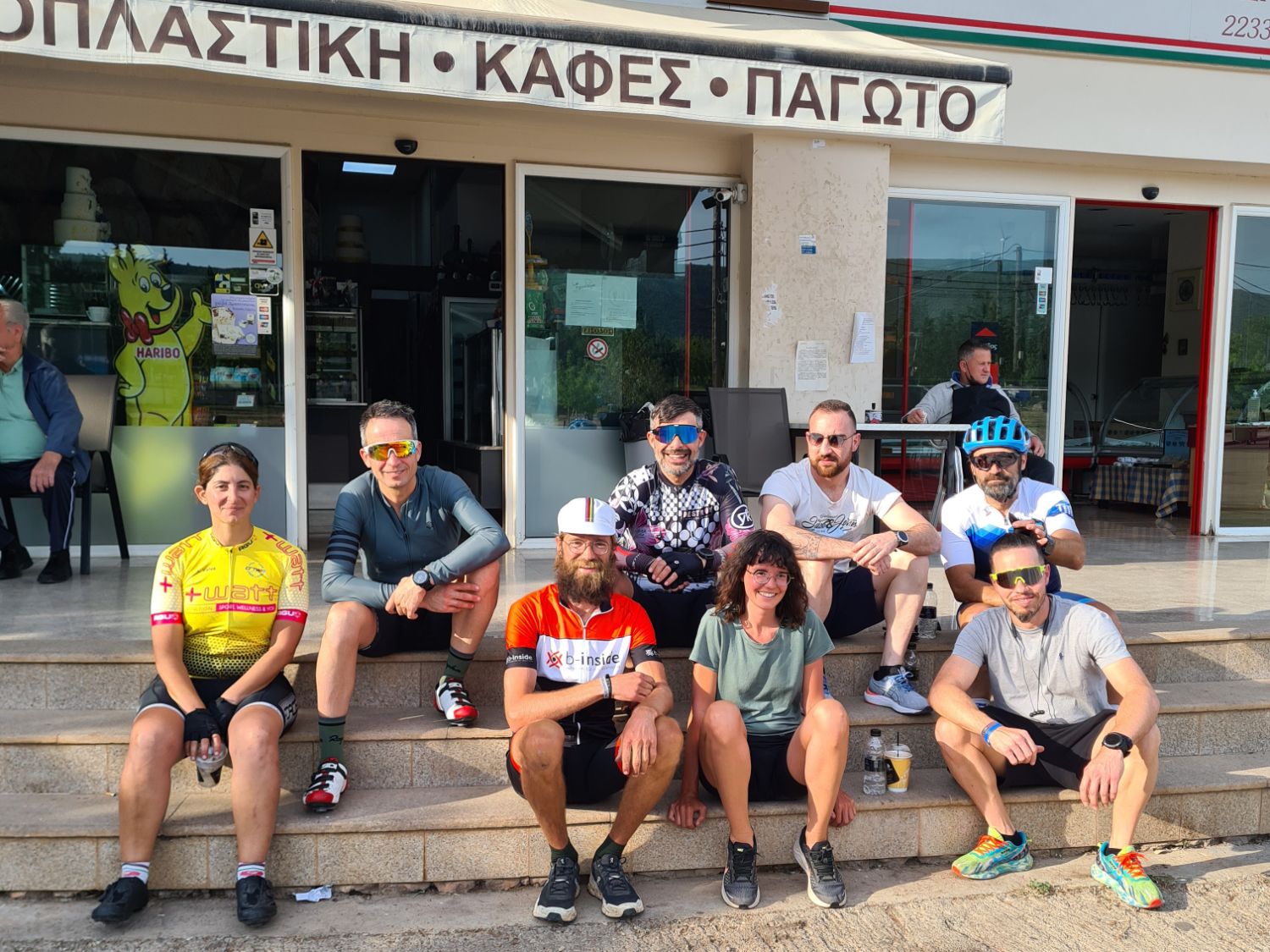 After some pushing and pulling, I luckily managed to fix the tire for the most part and we were back in the saddle the next day.

A few more days of nice views, some hills, beaches and showers we ended up in Volos where we pitched our tent in a city park after dark.

After about a week of cycling we were confident in tackling our first bigger hill and decided to cycle from Volos, over Kanalia and Keramidi, back to the coast at Papakosta. It amounted to a day of 65 km with 1500 m of climbing. It was a day with hills, gravel roads and and empty new road. 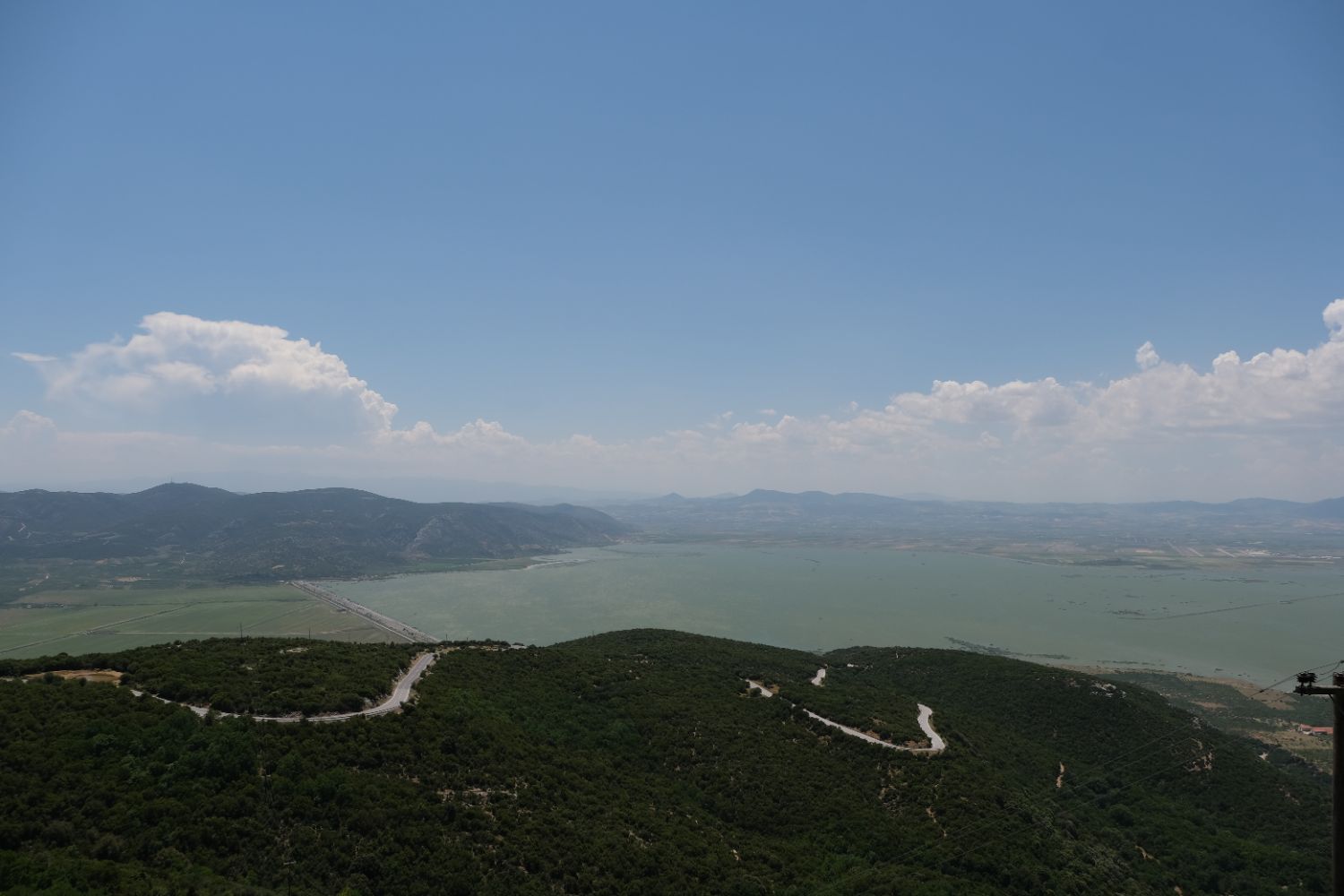 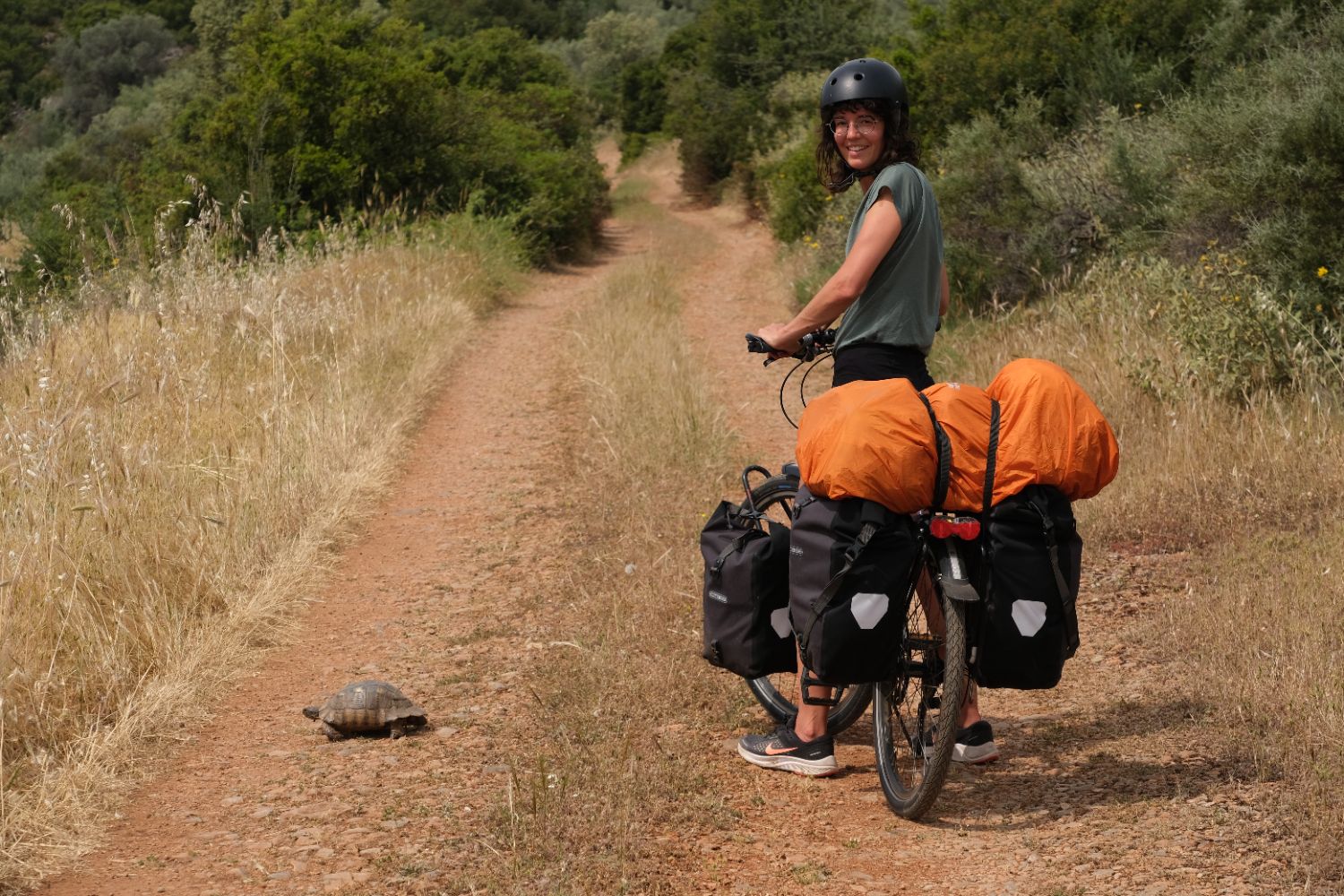 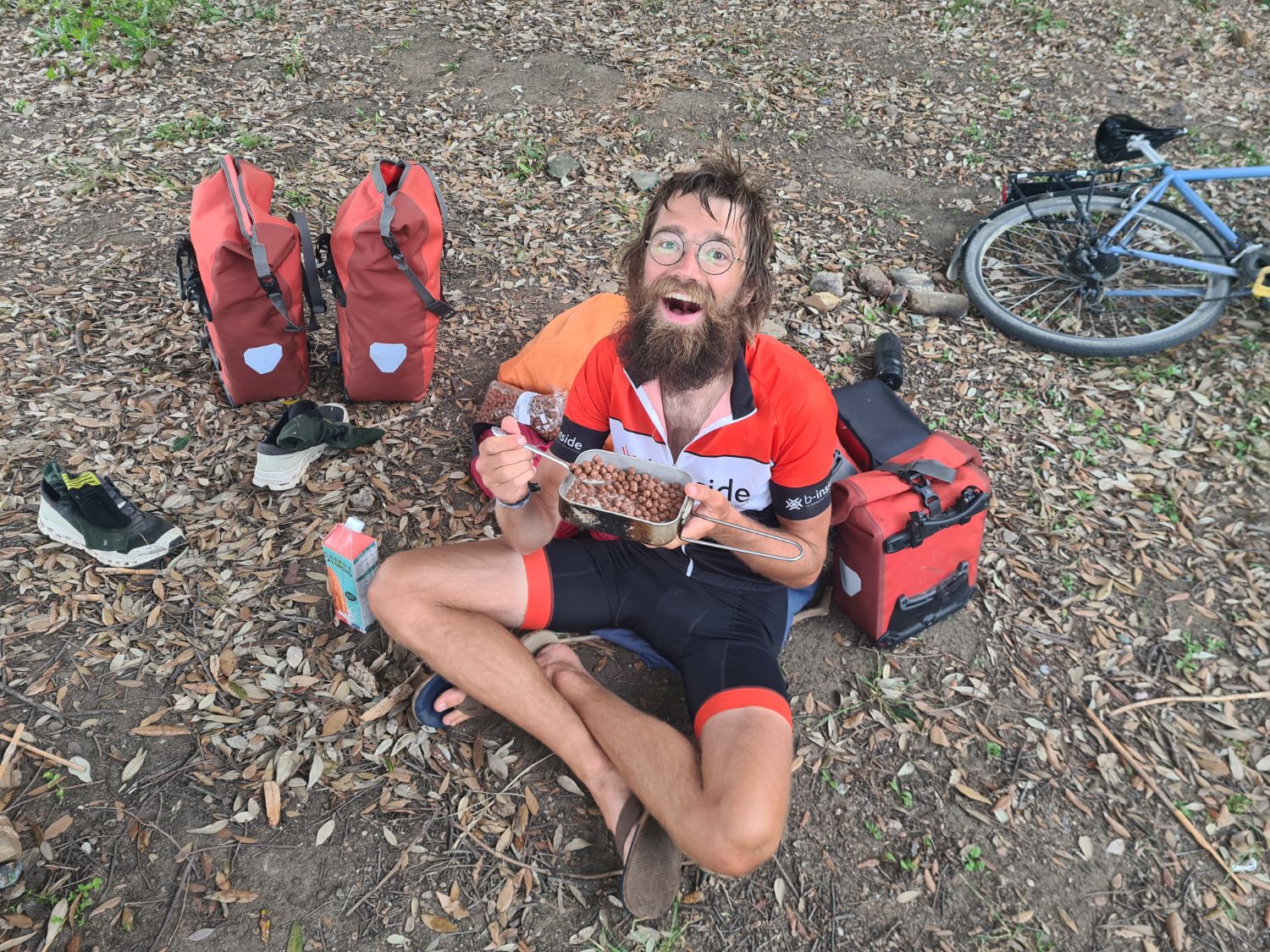 Choco balls after a long day

Towards the evening storm was brewing on the Aegean Sea. An older French couple, who were travelling with a camper, had invited us for some wine and cheese (of course), and already warned us not to stay in our tent under the tree.

We tried however, and when the winds picked up and the rain started falling we made the decision to accept the offer and we put down the tent, put our panniers on the sheets and knocked on the door of the camper and asked for shelter. And so, we were unexpectedly sleeping in a camper again.

We’re very thankful for them! 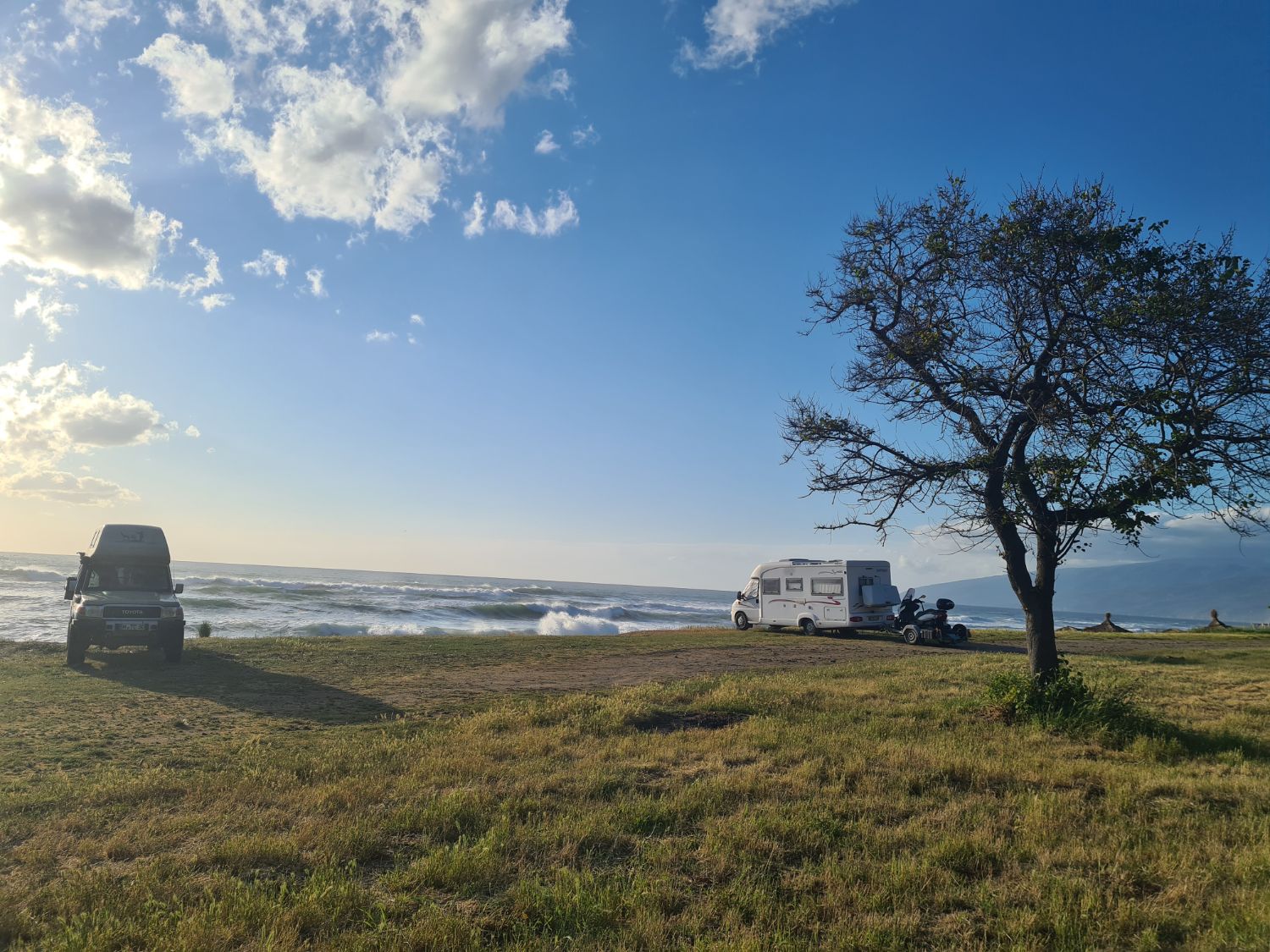 Our temporary shelter on the right

Sometimes we were driving on the service roads next to the highway. They took us quickly from one town or village to the next, but we found them mostly boring as they were straight and ugly for a few kilometers on end. So from time to time we tried to take different routes that were more adventurous.

It was so that during the last day before reaching Thessaloniki, we ended up pushing the bike over some overgrown tracks between farmer’s fields and onto on an old railroad bridge. It saved us about 10 kilometers, but definitely didn’t save us time or energy. Instead we got some exciting roads to travel. 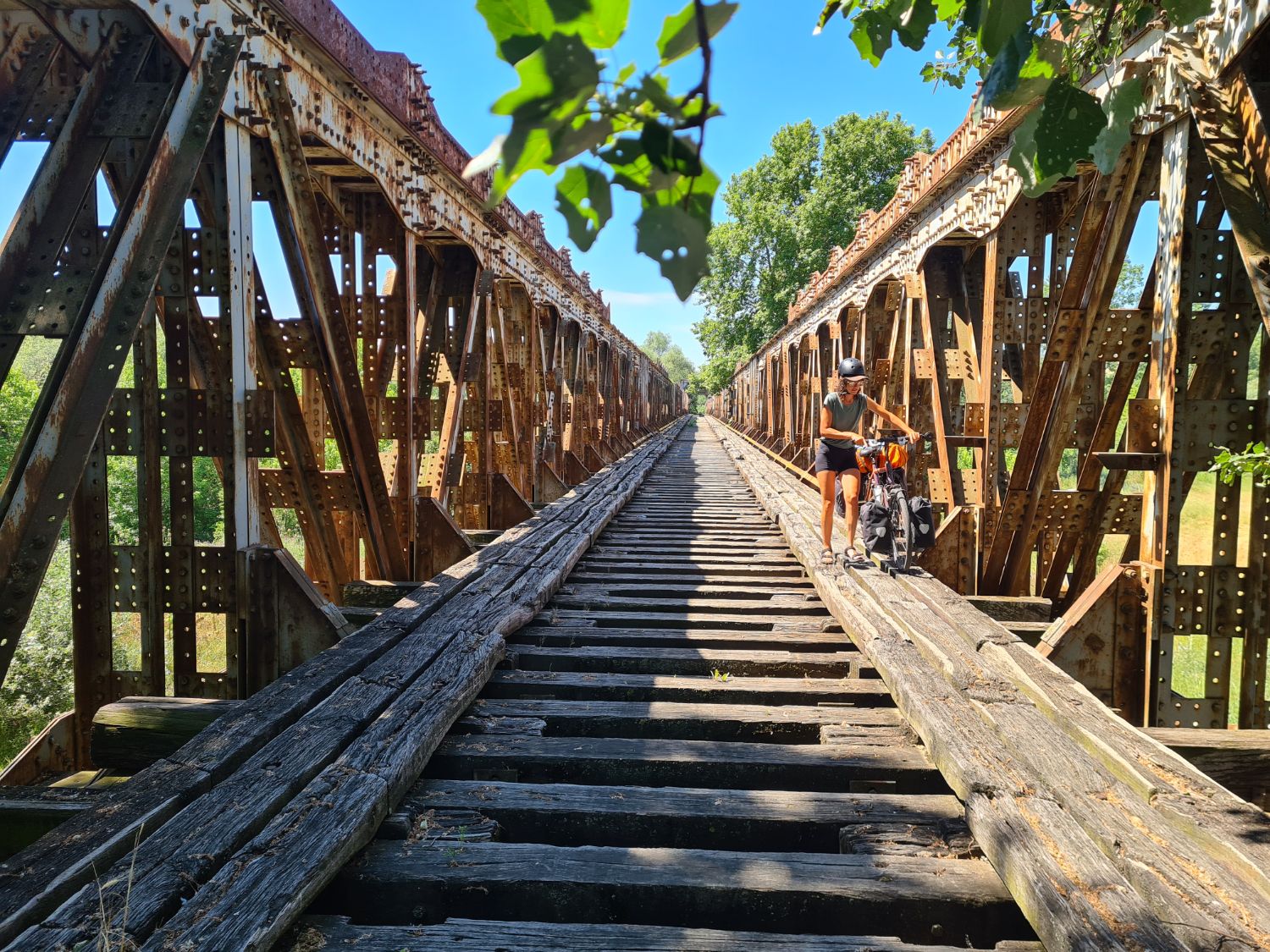 If someone reading this is interested in cycling to Greece, feel free to contact me for details on the cycle route. We definitely have tips om where to go and not to go ;-). 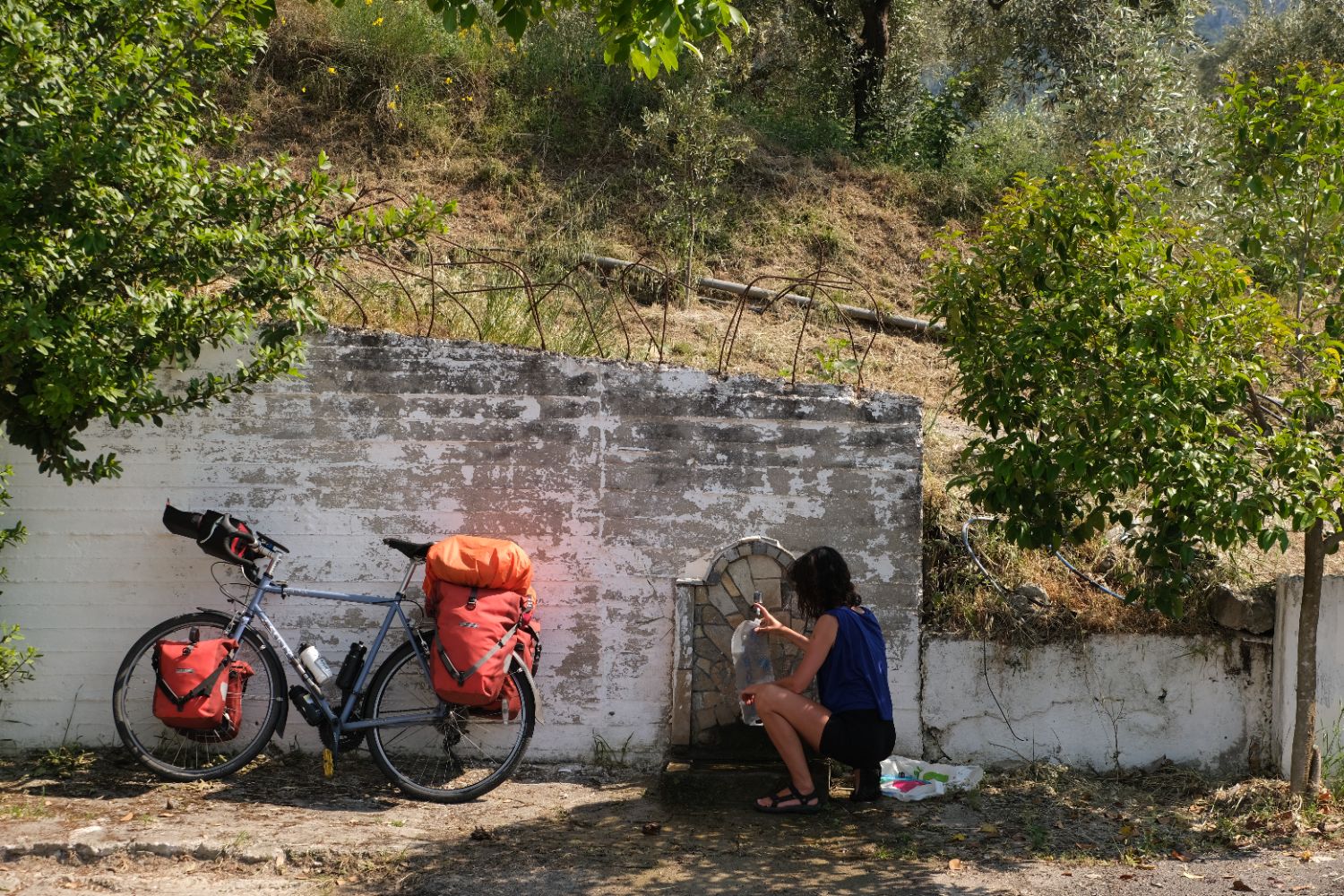 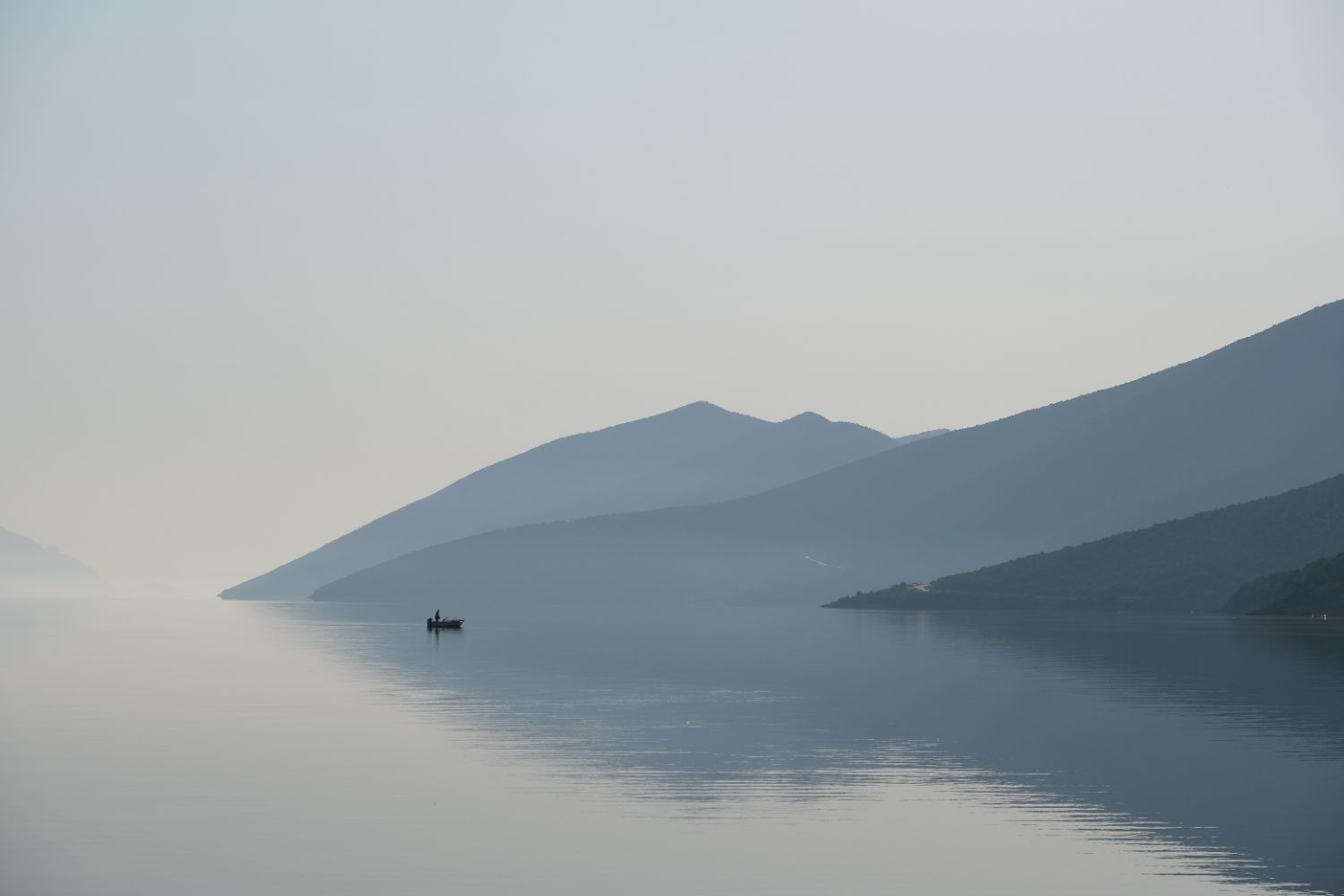 Beautiful view on the lagoon 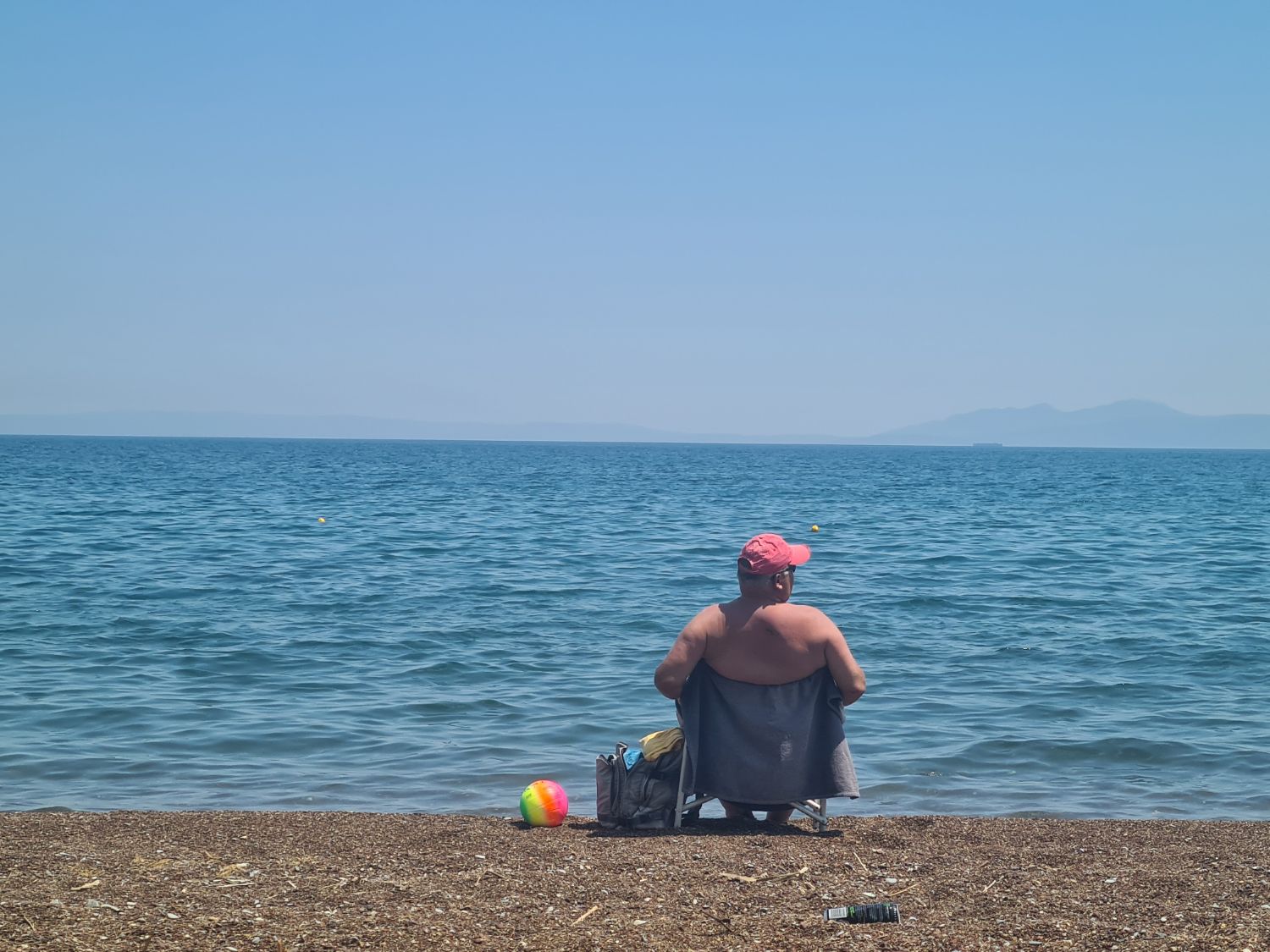 Only a few people on the beach 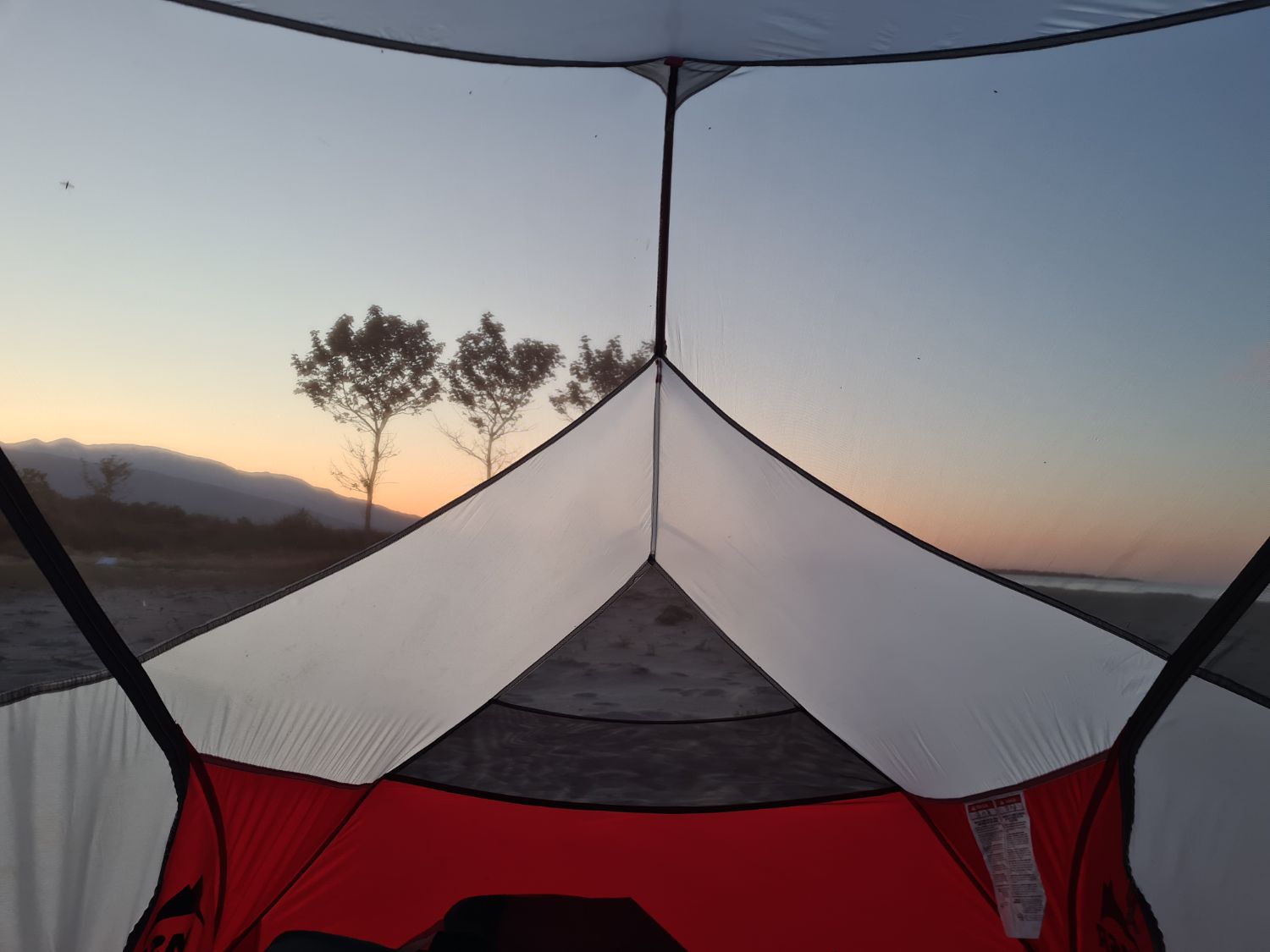 Nice view while shielded from the mosquitos 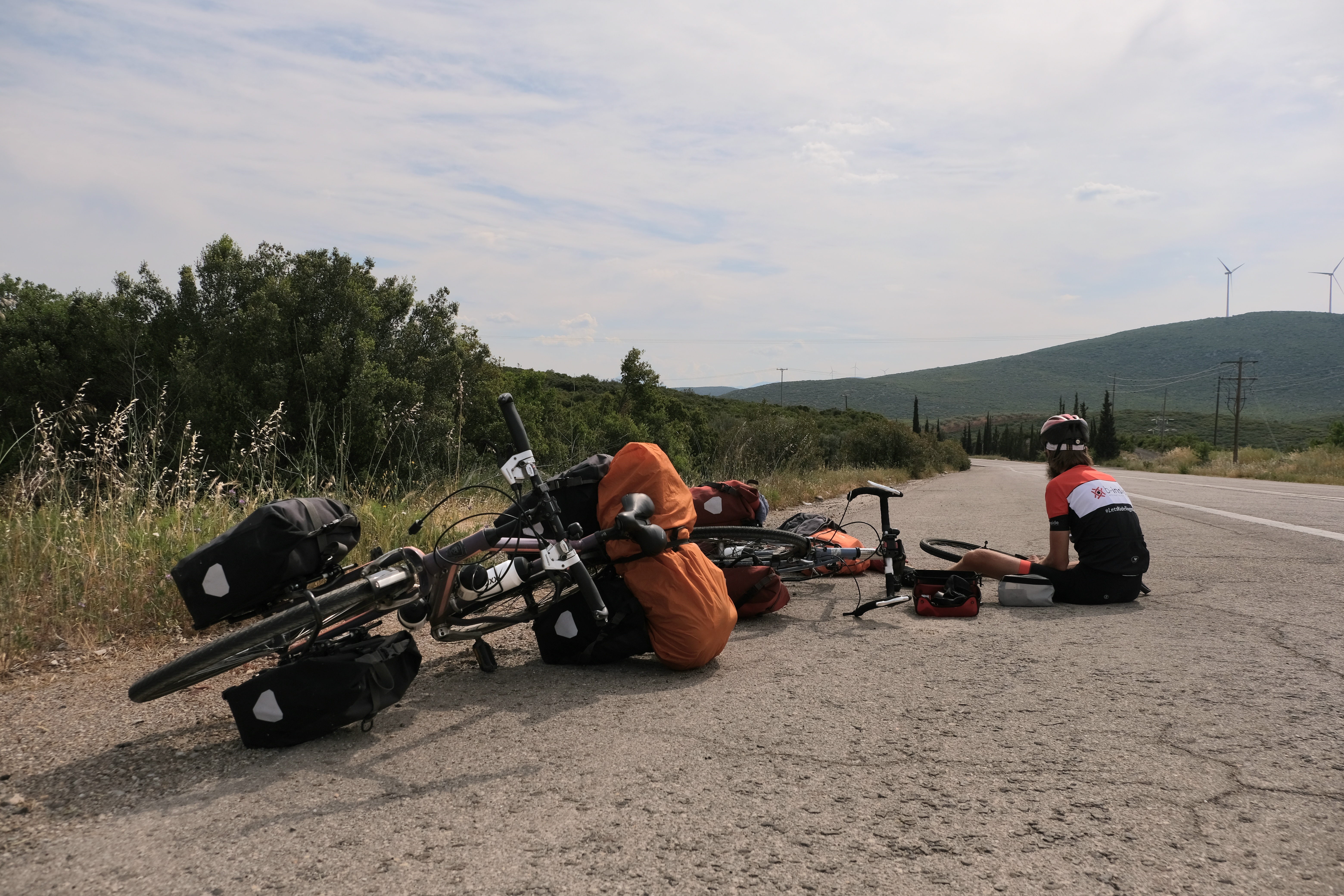 Trying to plug the puncture 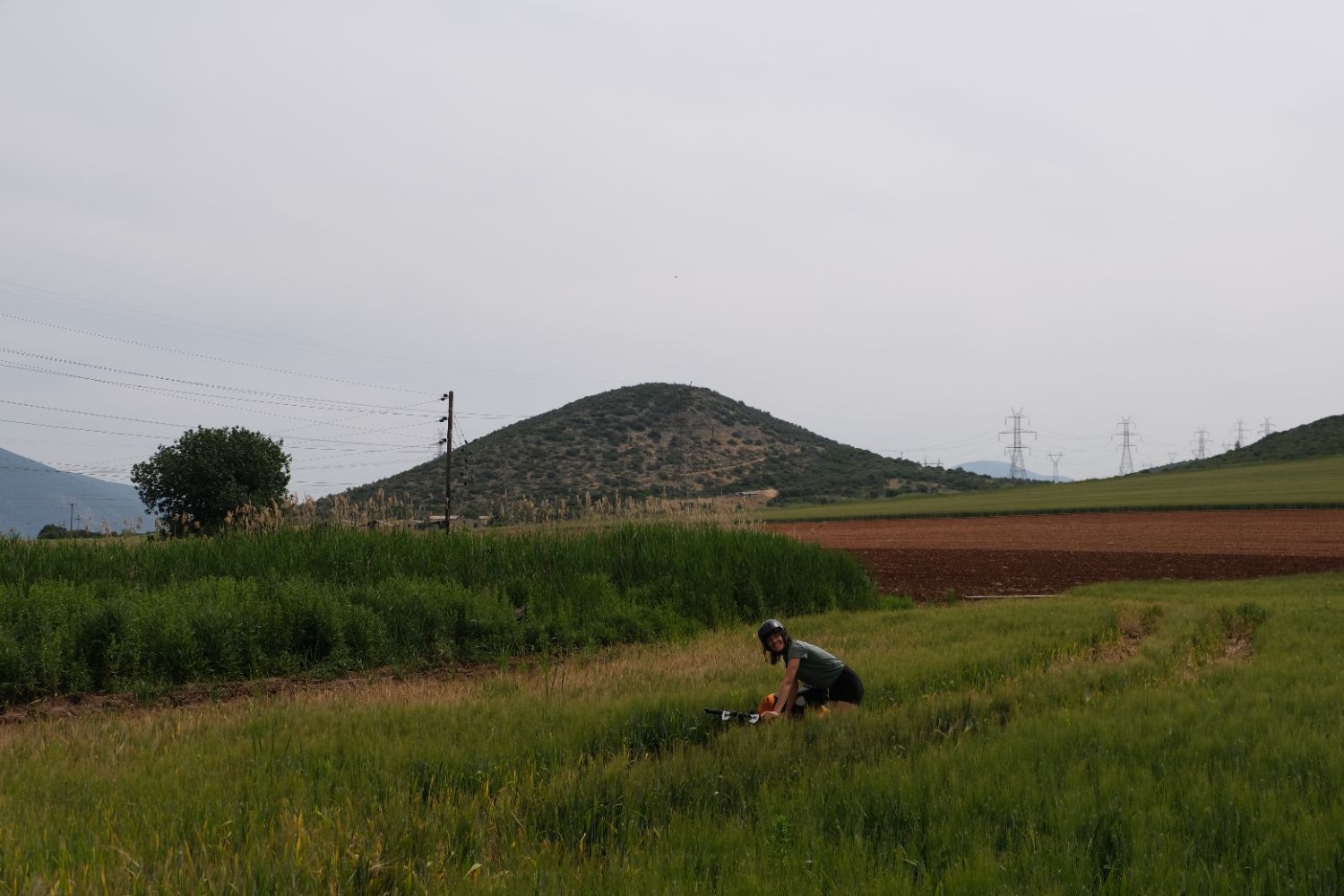 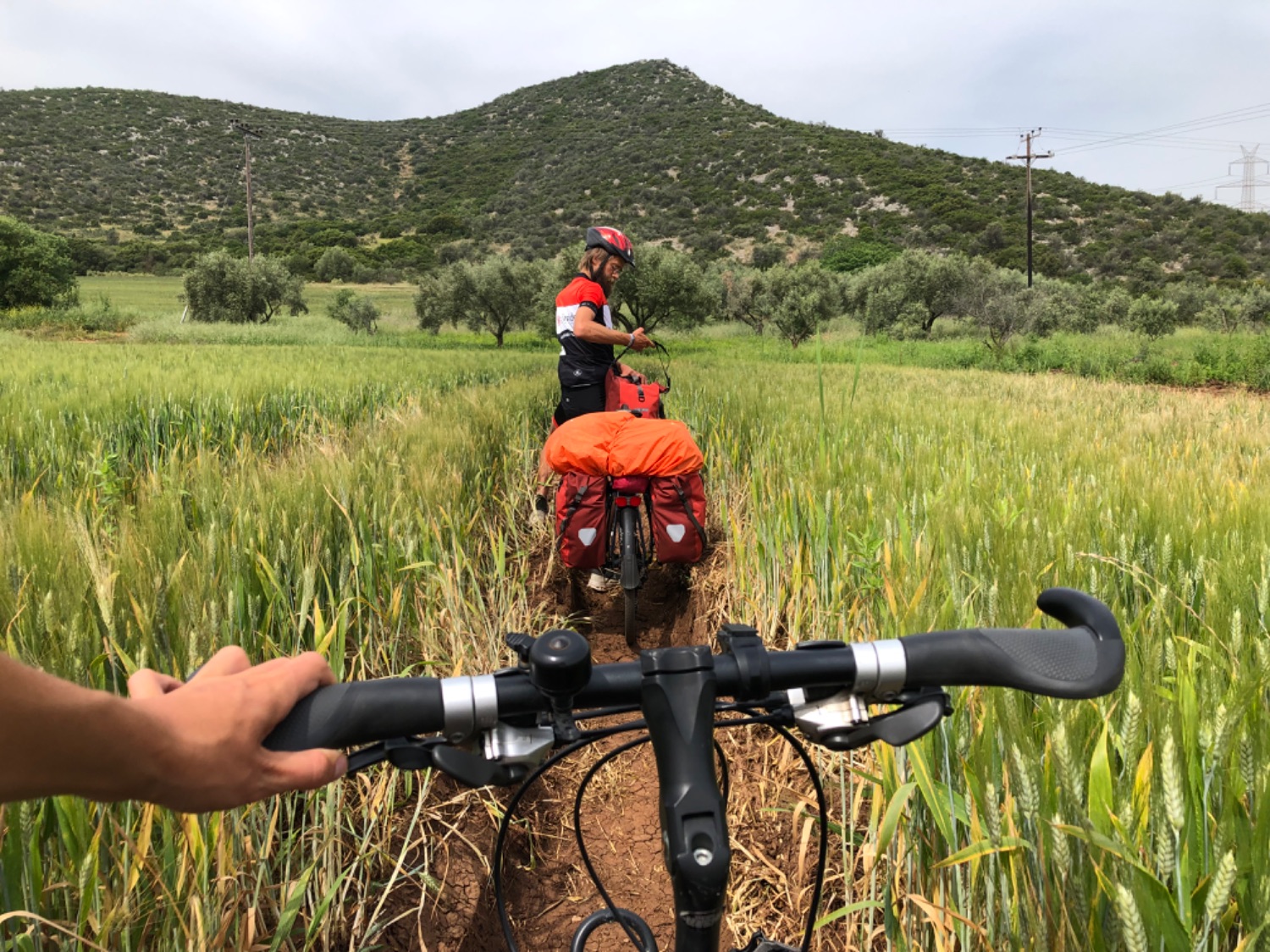 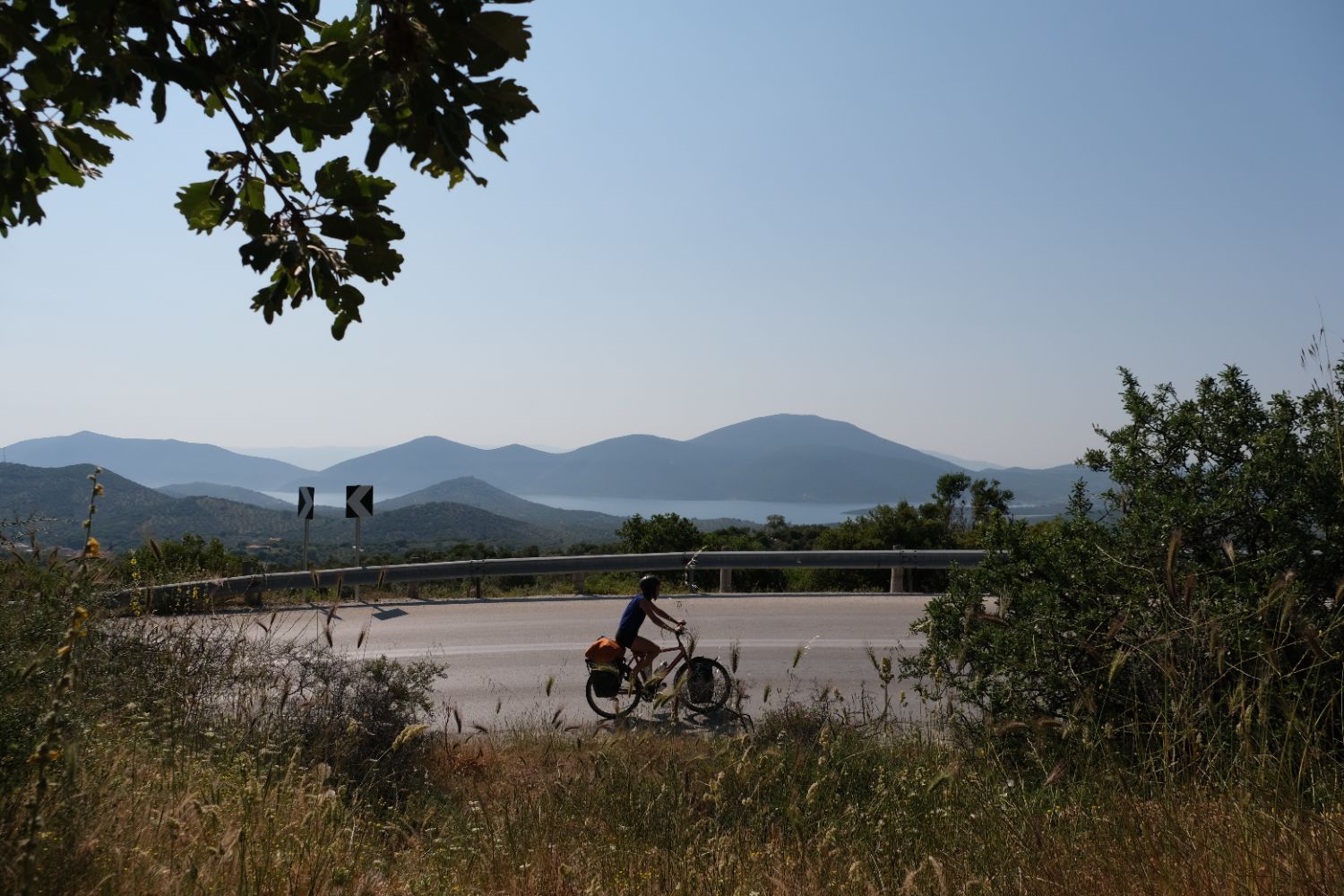 Not a bad view to distract from the uphill battle 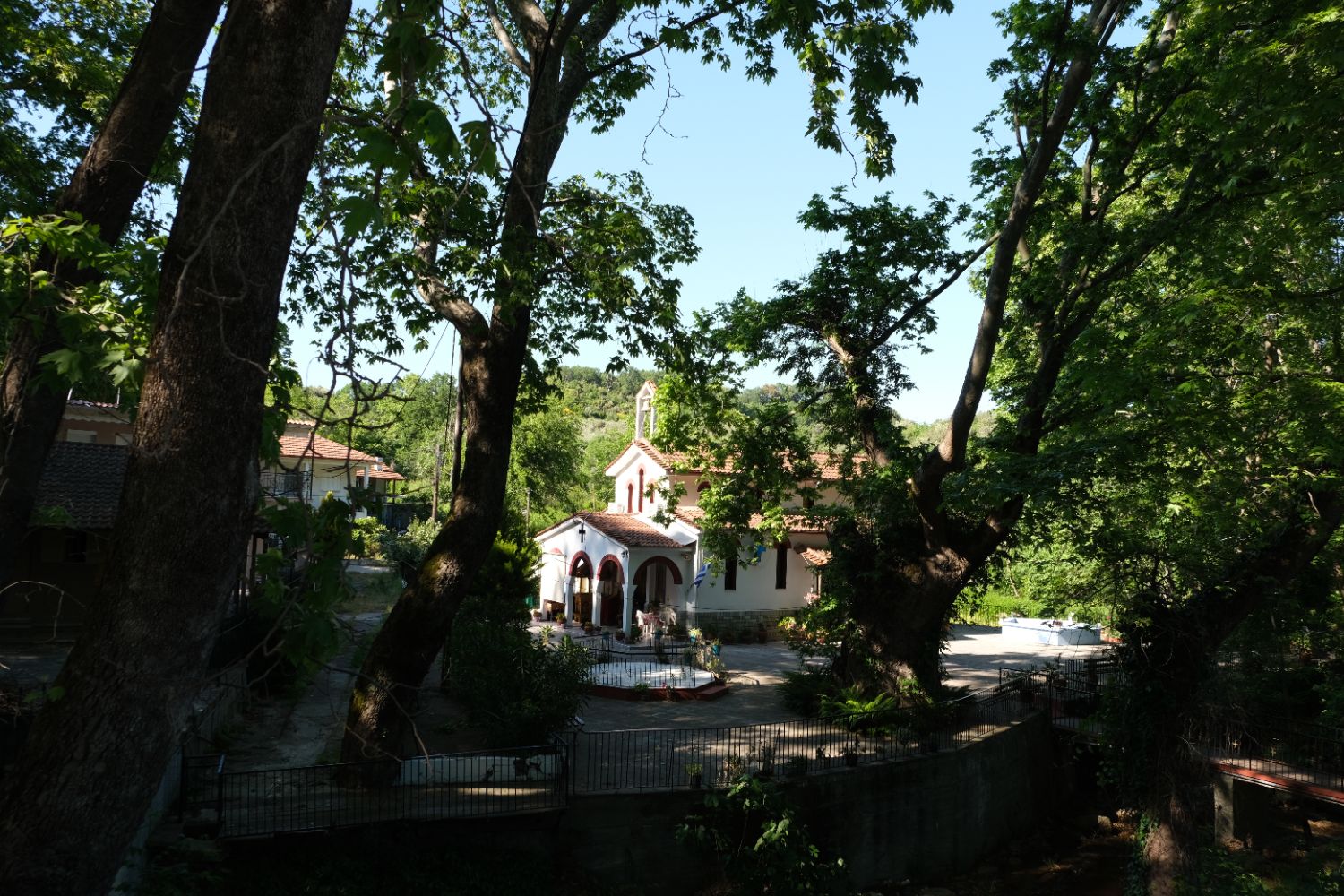 Cosy place for a church in Kokkino Nero