Mountains and the sea 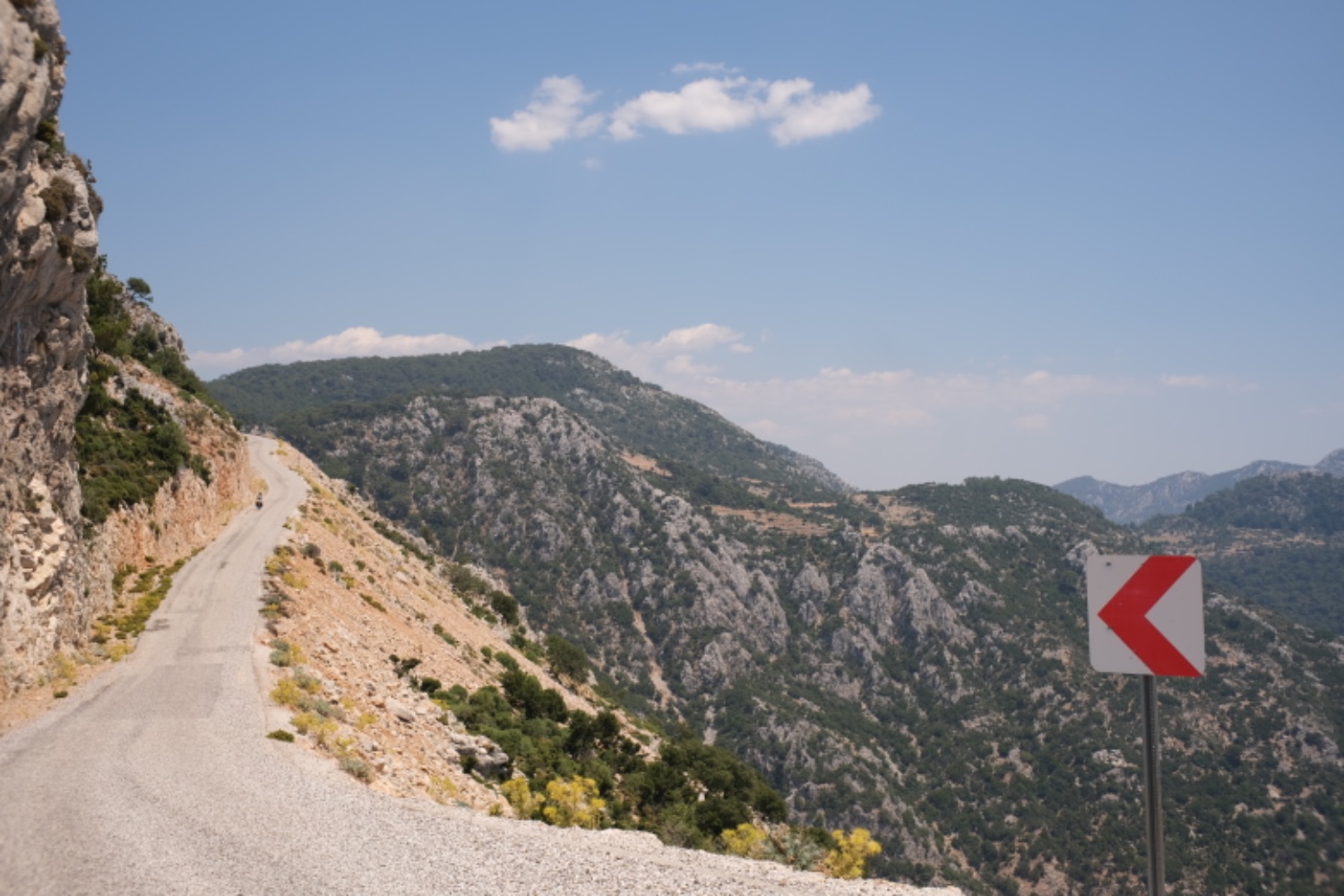 Merhaba arkadaşlarım! Since our last update, we cycled from Istanbul to the Mediterranean Sea, followed the coastline for a while, took a bus to Ankara and then cycled through Central Anatolia to reach the summit of Mount Nemrut, before arriving in Mesopotamia by crossing the famous Eufrat.

The main theme remains the incredible hospitality in Turkey. I think you have to see it to believe it, though. Throughout the last month and a half, we drank more tea than we could’ve imagined, slept inside more than we had to camp, and talked with more people than we could sometimes handle. Except around the coastal region, where the very very slight dip in hospitality, due to tourism, was more than compensated by amazing landscapes.

Here’s is a little peek into how it has been since we left Istanbul, almost two months ago. Since it's been a while, and there’s always a lot to tell, I'll split this update in two parts. 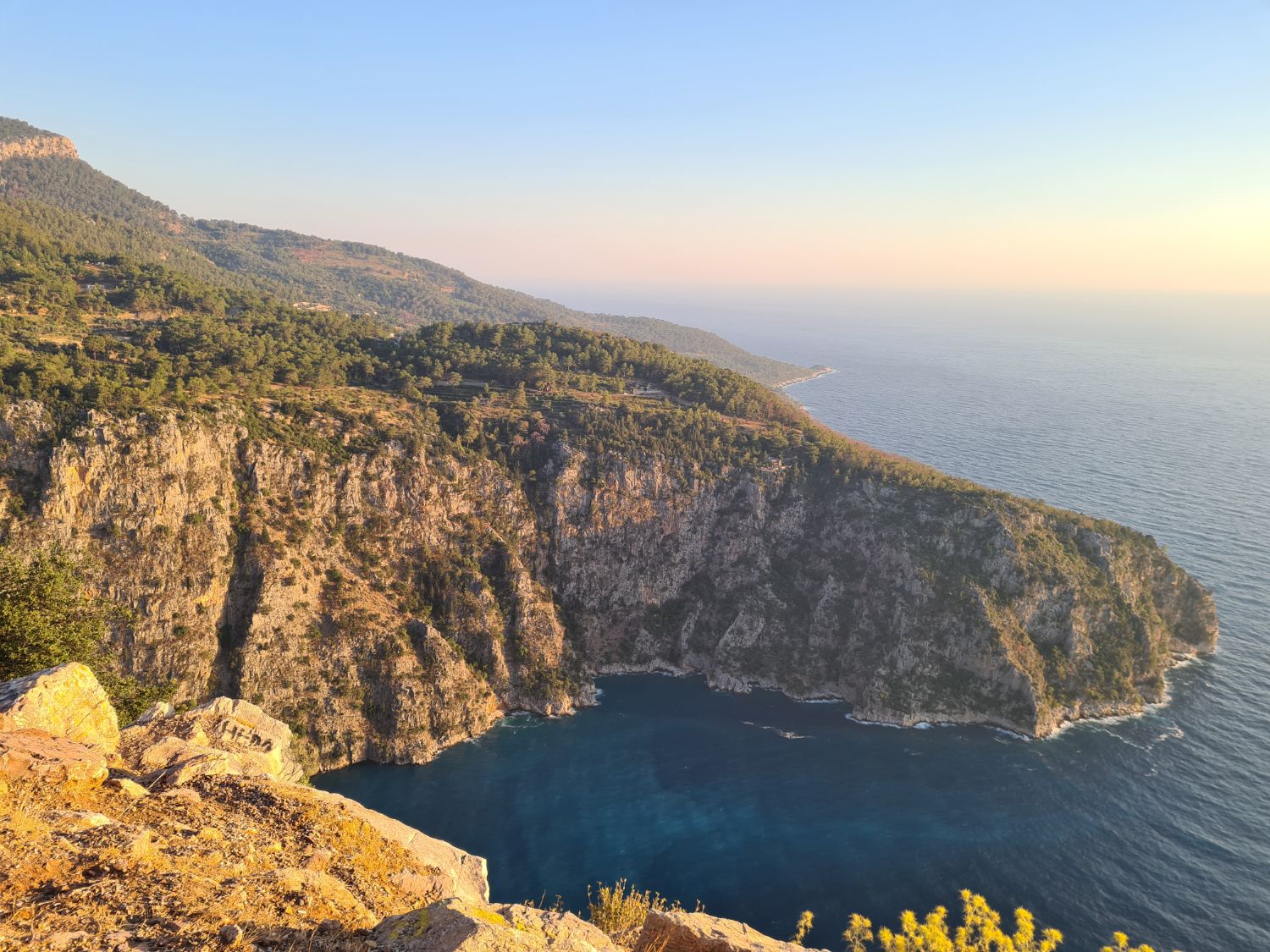 We left the biggest city of Europe on a ferry across the Sea of Marmara to Bandırma, together with Six and Tom (our Belgian friends we met the day we entered Turkey). We hadn’t left the port yet or we already shared our Instagram pages with an interested local and got some chocolate in return. Then, after disembarking, we stopped for some food and received the food plus extra tea, lots of fruit and a bag of soaps. Maybe that last gift was a subtle hint?

We first had some rainy days in our way south towards the coast. This didn't stop anyone from inviting us for food and a place to sleep however. 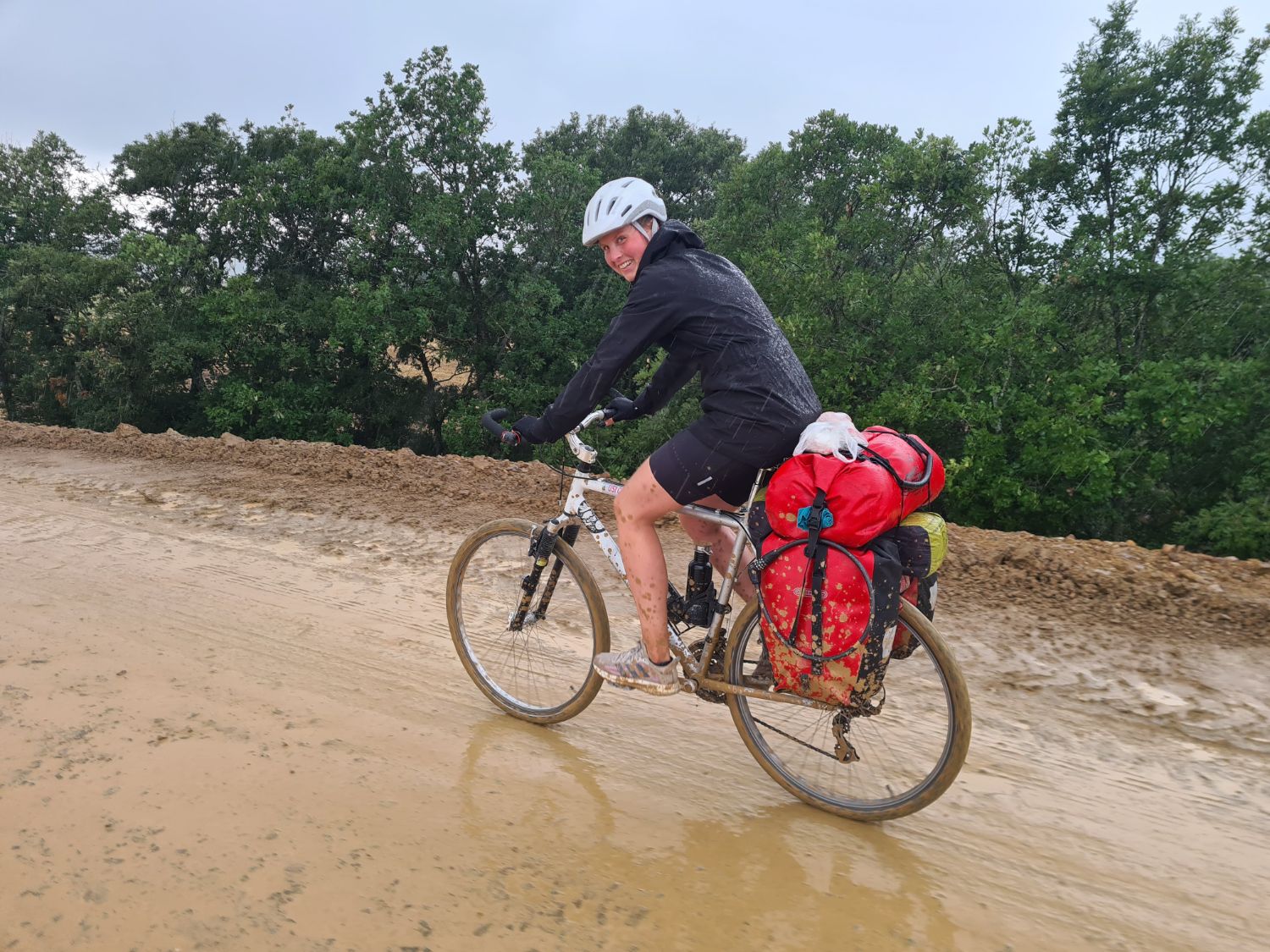 Sixtine got the full load of mud

A small issue with all of this is that we never know how much food to buy, or any at all. We always need to have something in case we end up camping somewhere. But, if we get invited a few nights in a row, and simultaneously receive fruit, potatoes and tomatoes throughout the day, we unfortunately end up having to throw away a few things. I think it’s a balancing act every cyclist has to learn while being here. 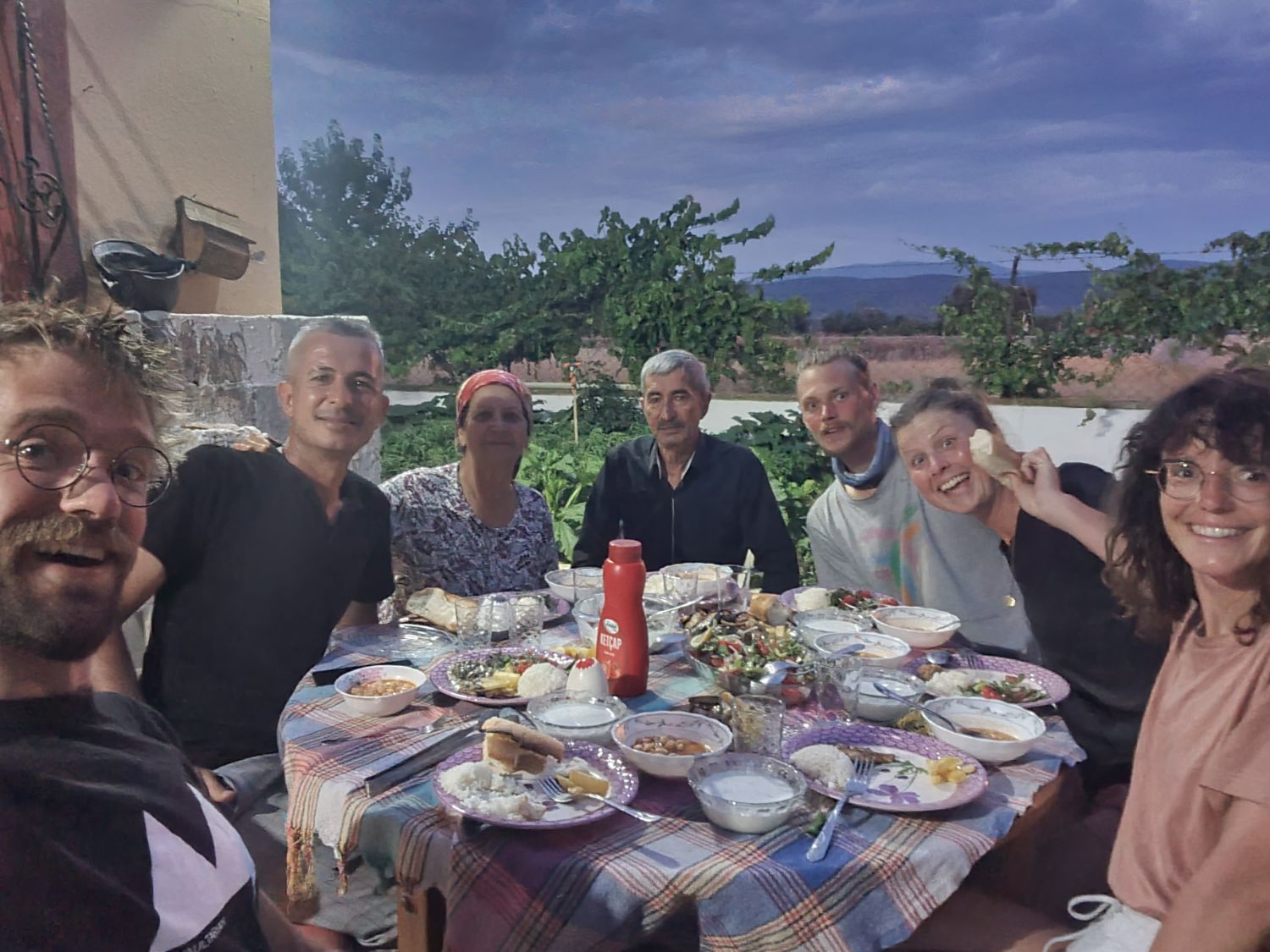 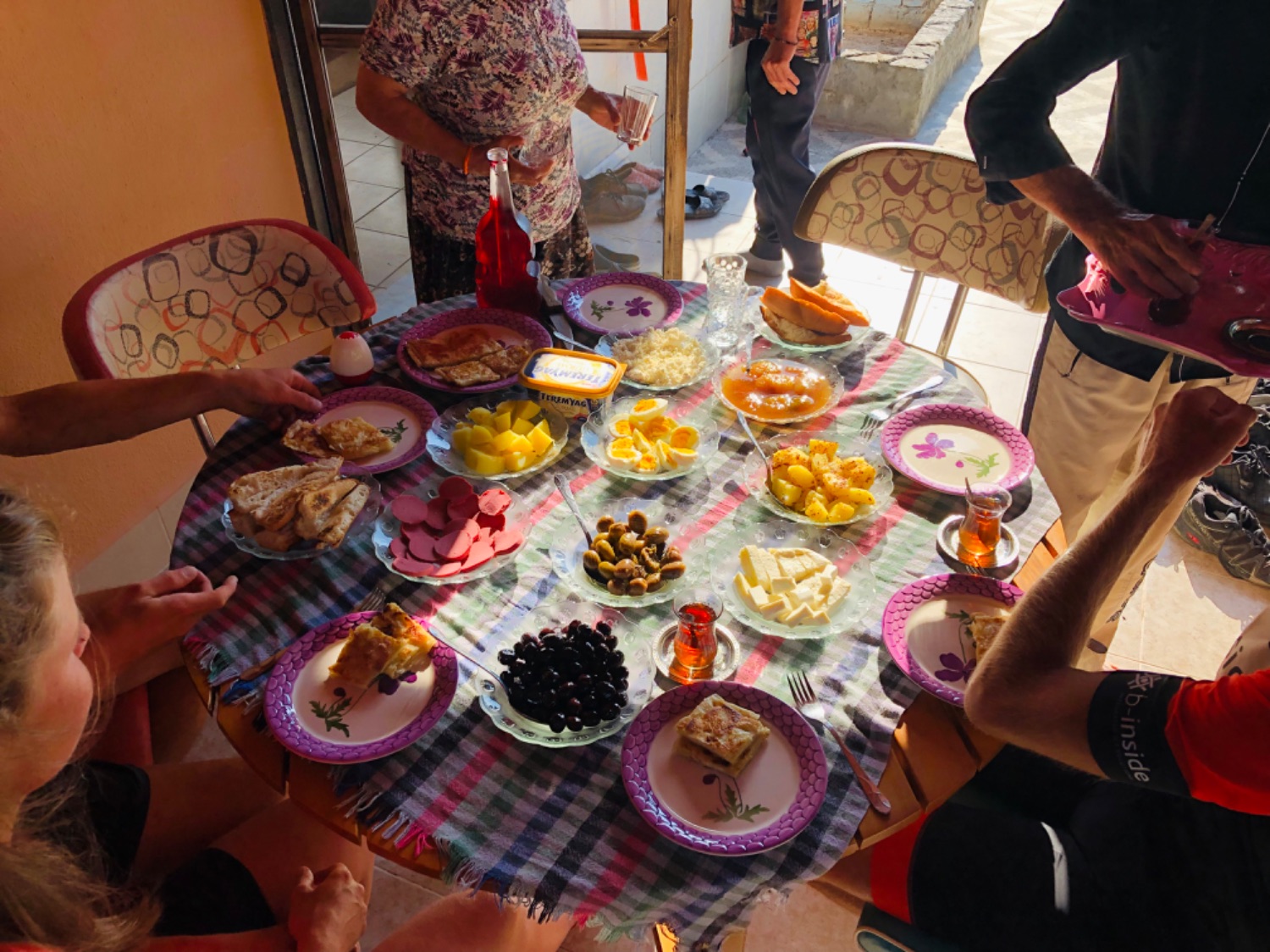 We split with Tom and Six after a few days since we wanted to go to Pamukkale, and they had there eyes set on Marmaris. 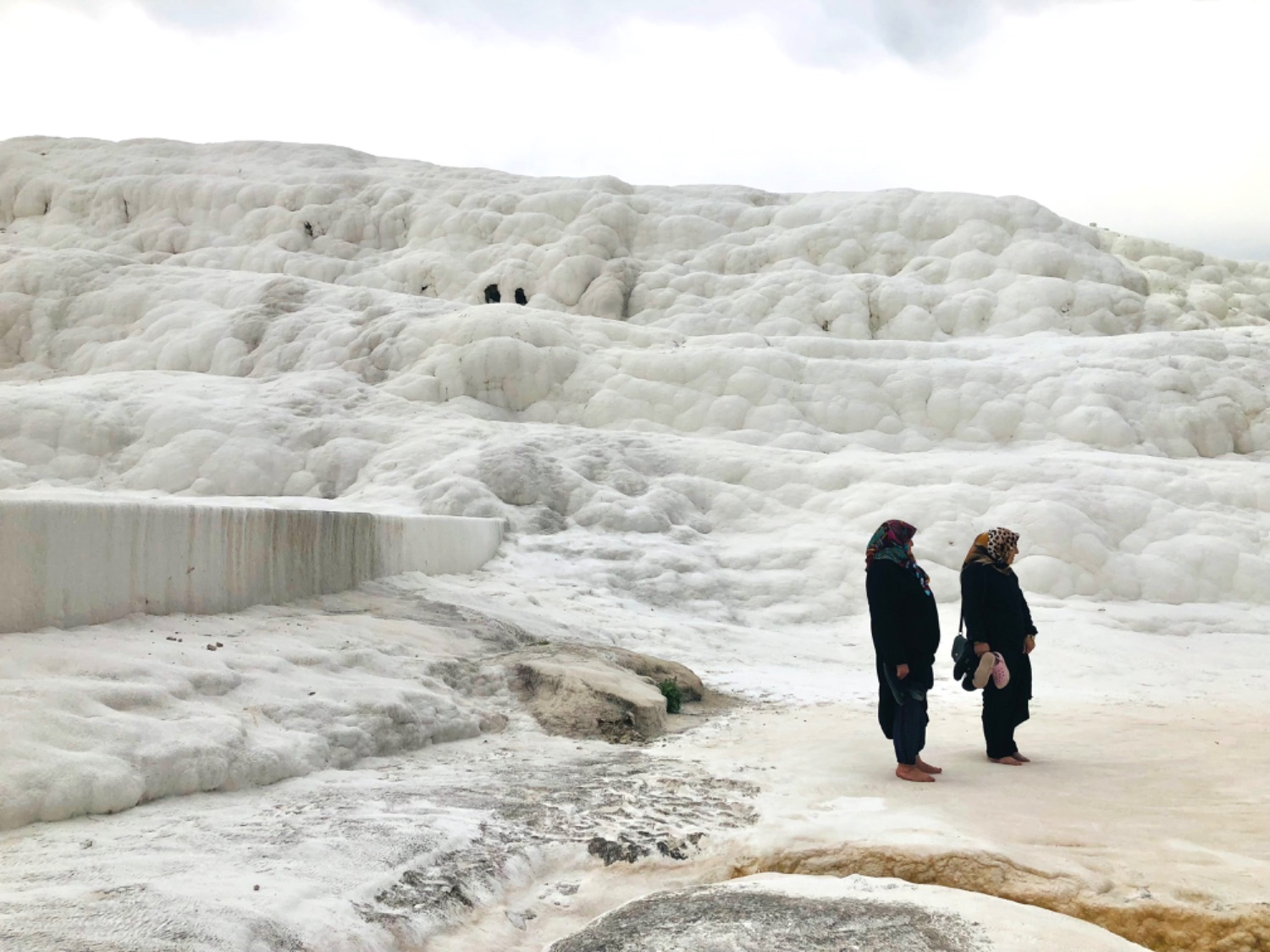 On our last day together, we cycled in the morning and planned to split after our obligatory çay break at midday. However, this break turned into an audience with the village chief (or maybe he even was a local governor) who invited us for food and more tea in his office. This turned out to be the first of many invitations with village chiefs. 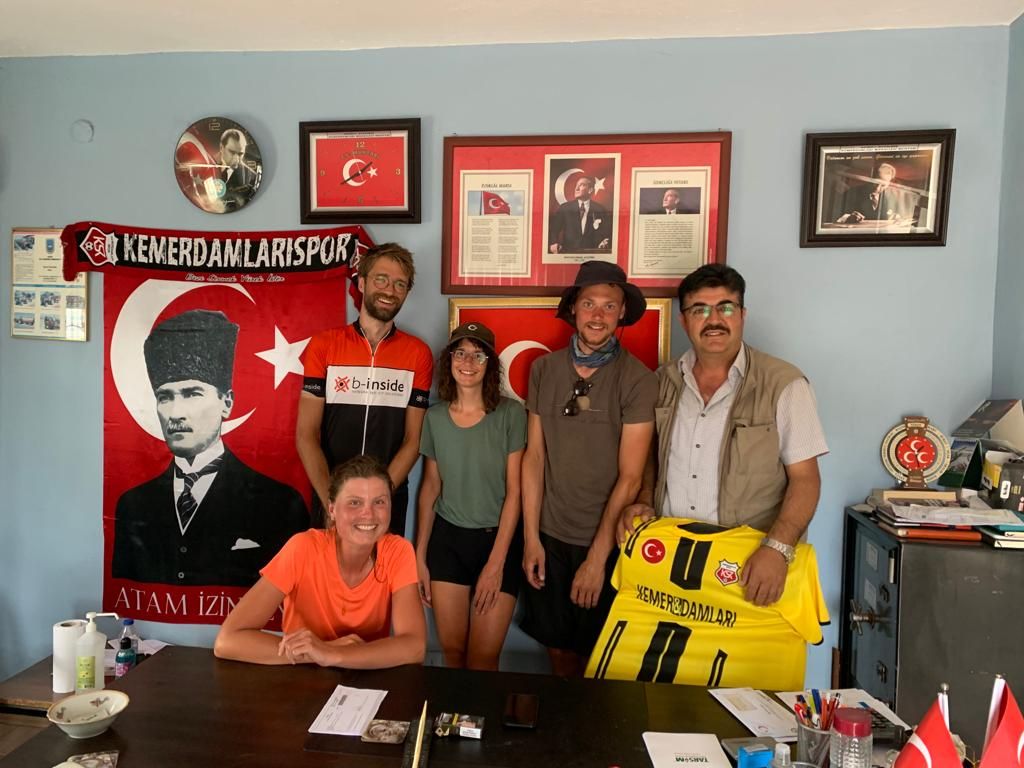 Audience with a local governor

Next up was the coast. Incomparable, of course, with the Belgian coast, both in beauty and landscape. The mountains rise up from the sea immediately, which means that there isn’t really a lot of flat road at the coast. We regularly found ourselves enjoying the breeze at sea level, only to be at a 1000 m elevation just a few hours later. But, this made for some of the most beautiful, and steep, roads so far. 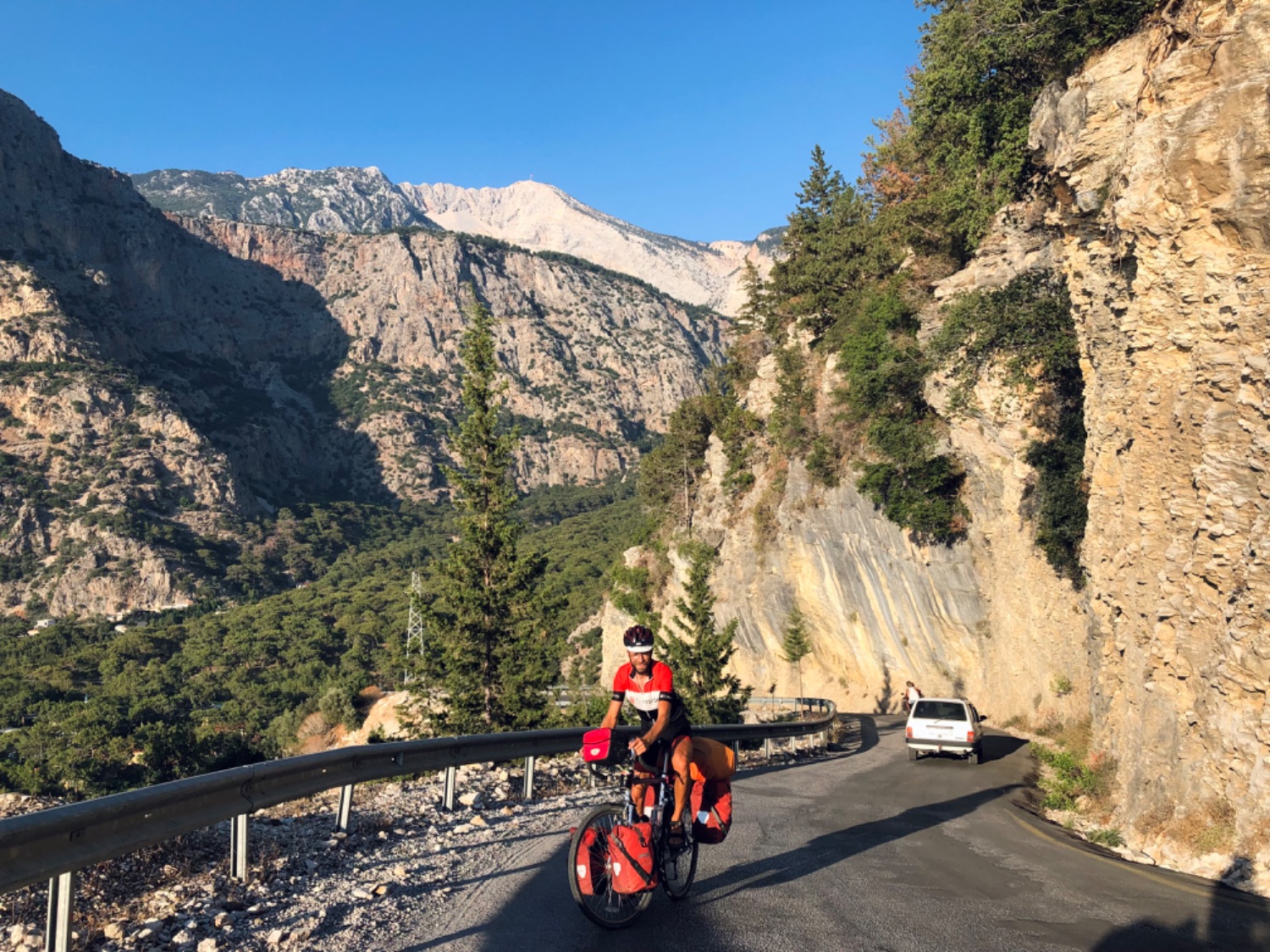 We arrived in Ölüdeniz, Fethiye where we managed to stay in a fancy holiday villa. We met the owners in a village in the mountains just a few hours before and they allowed us to camp in their garden. Not before stuffing us with a lot of food, of course! 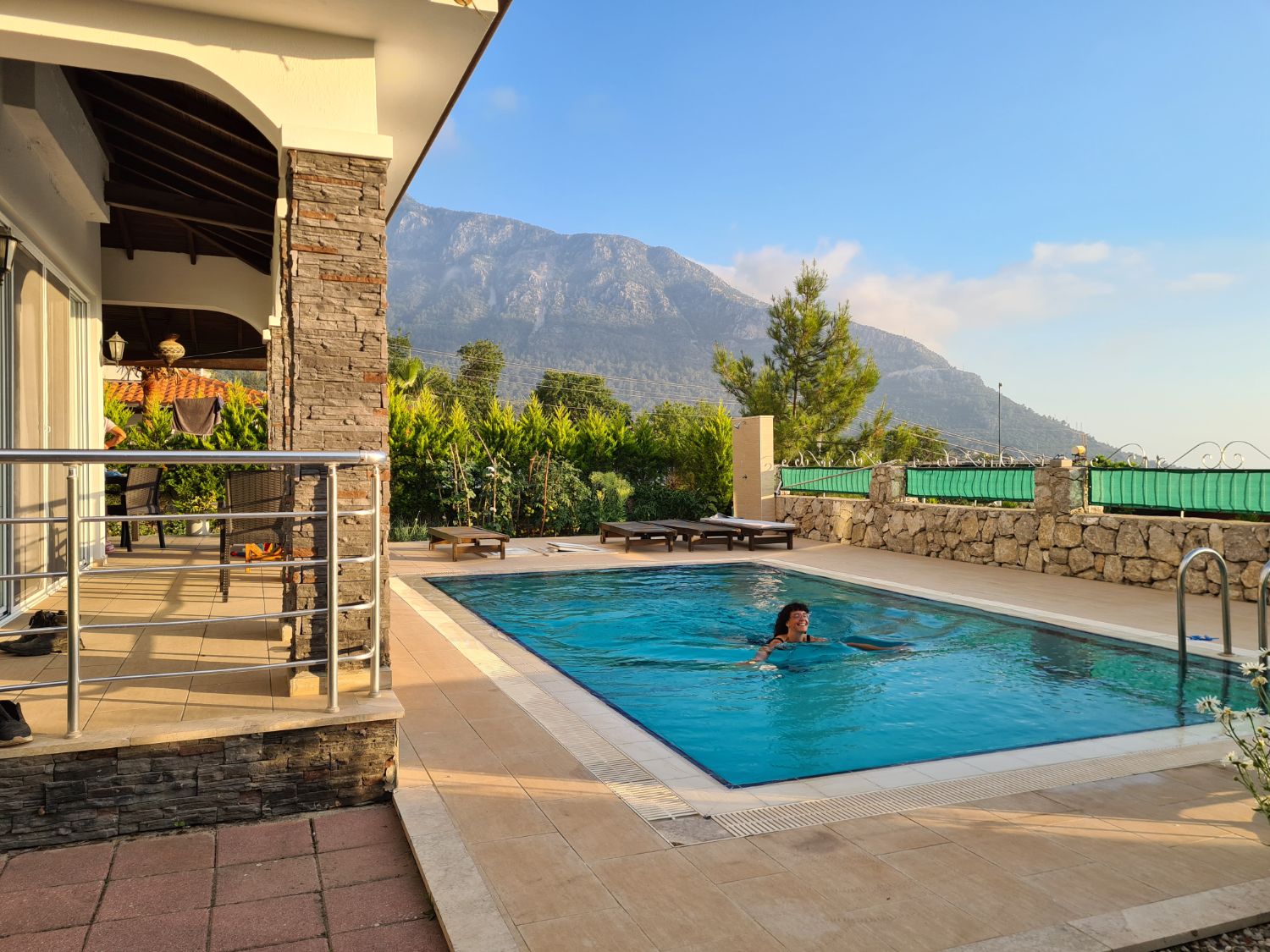 This turned out to be one of the last times we got offered something, until we got to Antalya. It didn’t really bother us too much, of course. On the one hand, we think this was due to the area being more touristic, but on the other hand, there were also many villages that consisted only of greenhouses. Luckily, the people remained super friendly everywhere. 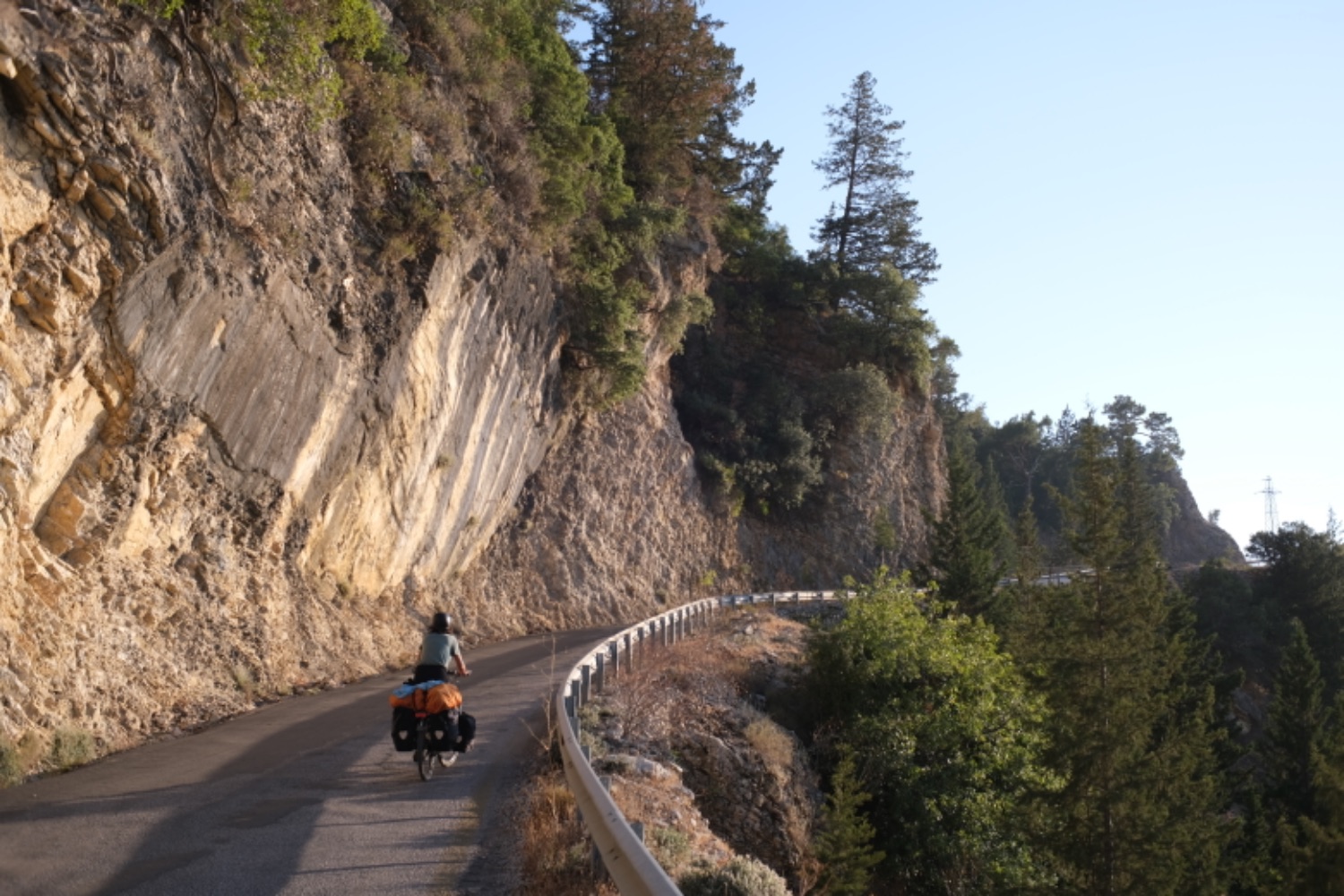 A few kilometers from the sea 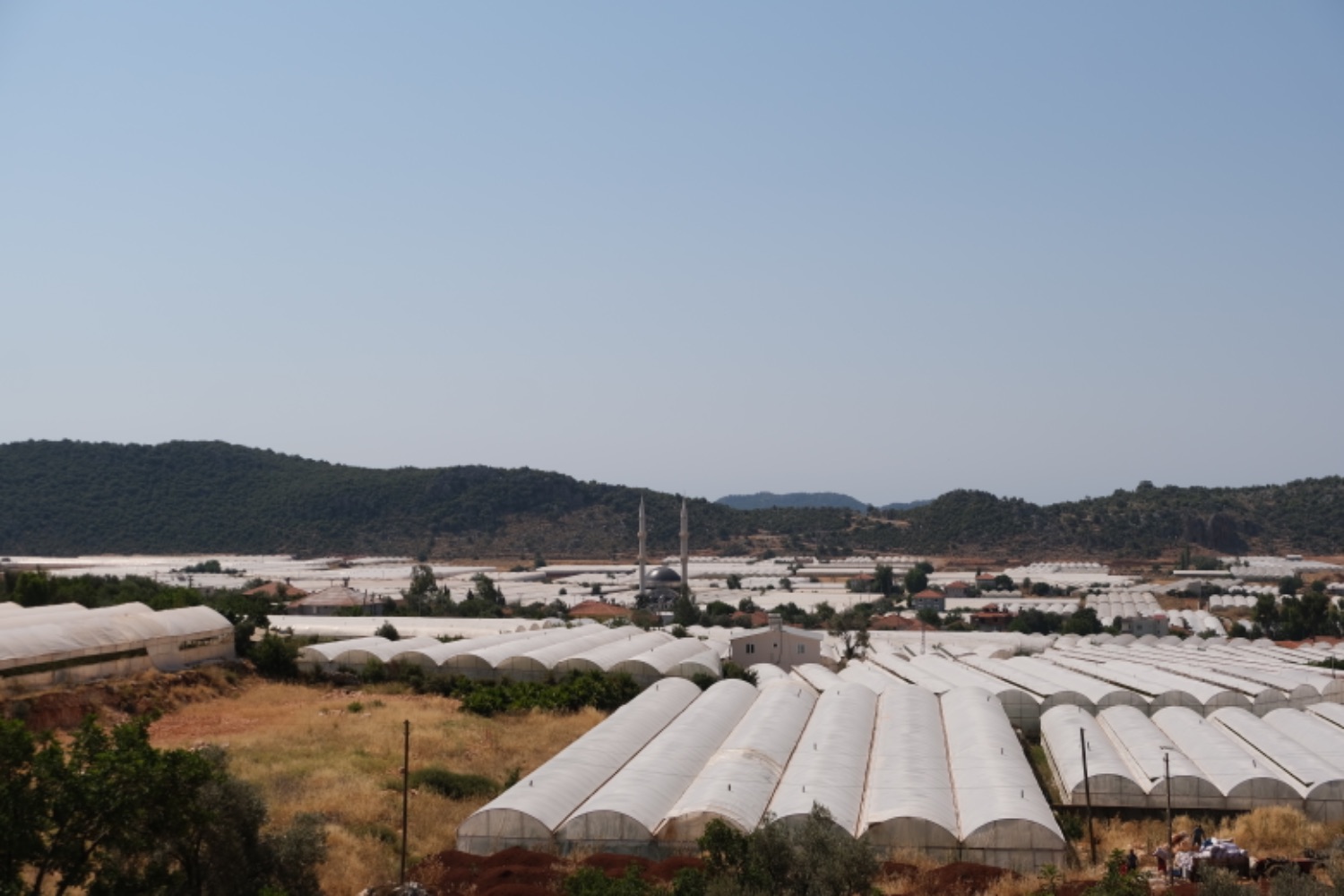 A mosque between all the greenhouses

The road remained amazing all the way to Antalya. We struggled sometimes with the constant up and down, but the views were incredible. And, being higher up meant that the temperatures remained manageable. 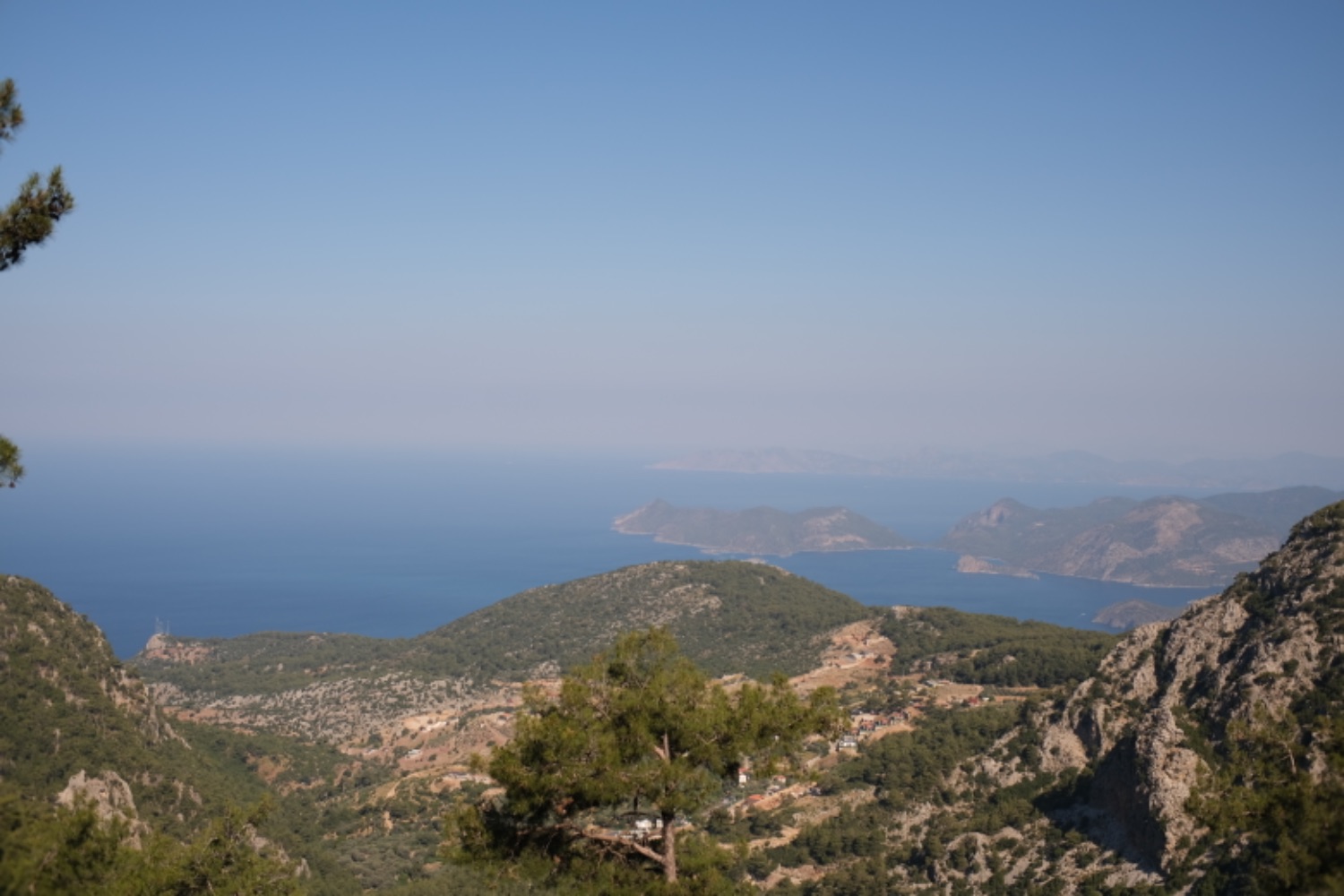 View over the Mediterranean Sea

By bus to Ankara

Since our initial plan was to go to Iran after Turkey, we needed to make an “administrative” stop in Ankara. We knew this could take some time, so we decided to take a bus from Antalya to Ankara, to win back some time. 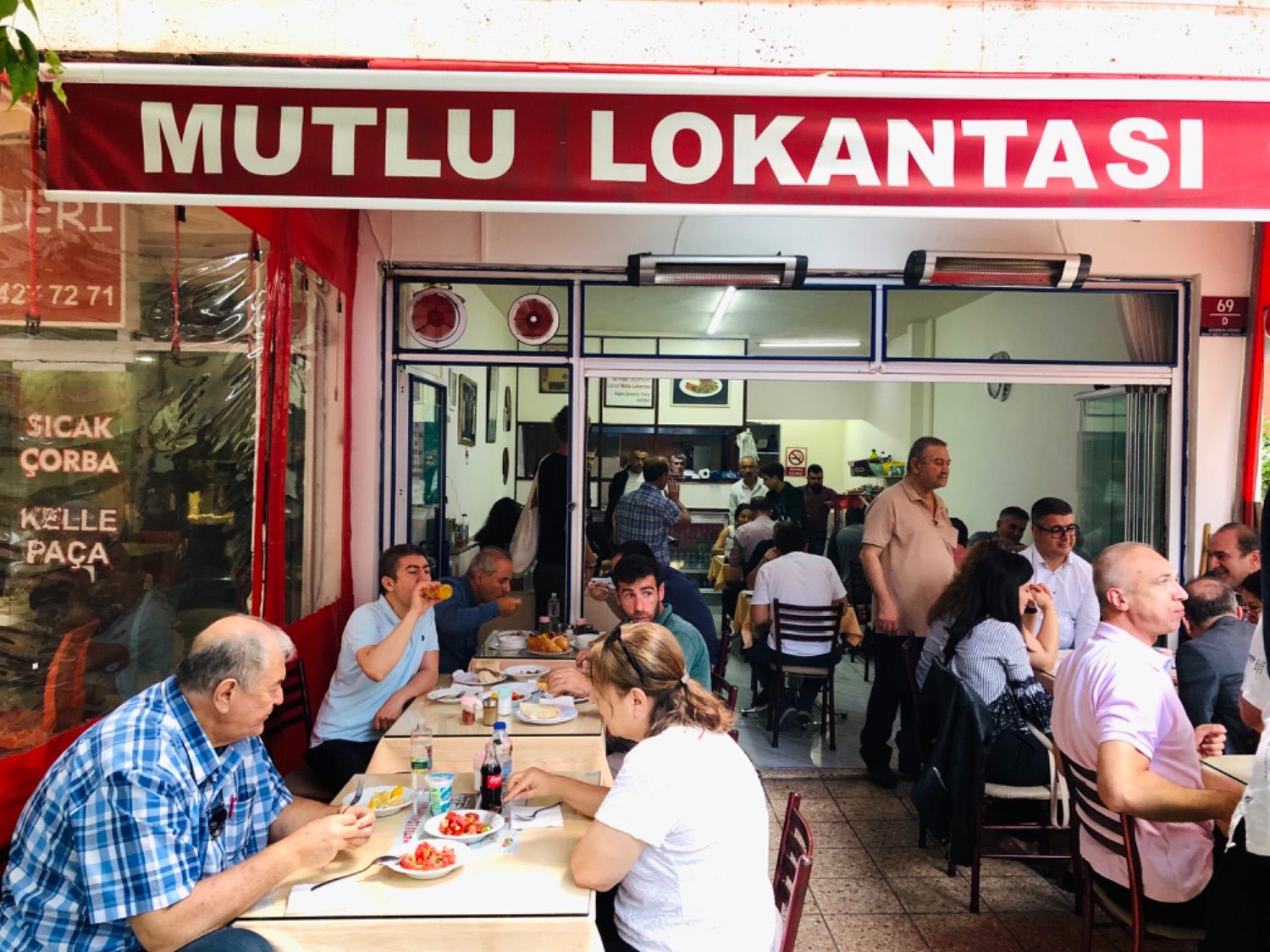 A super busy lokanta with some nice food

We had already been approved our e-visa application, and after showing some extra documents (COVID stuff) at the embassy of Iran, we were allowed a visa. We had the choice of getting it right away, for € 75 or wait a week and pay € 50. We chose the latter since we were staying with a Warmshowers host for free, and € 25 per person means a lot here. 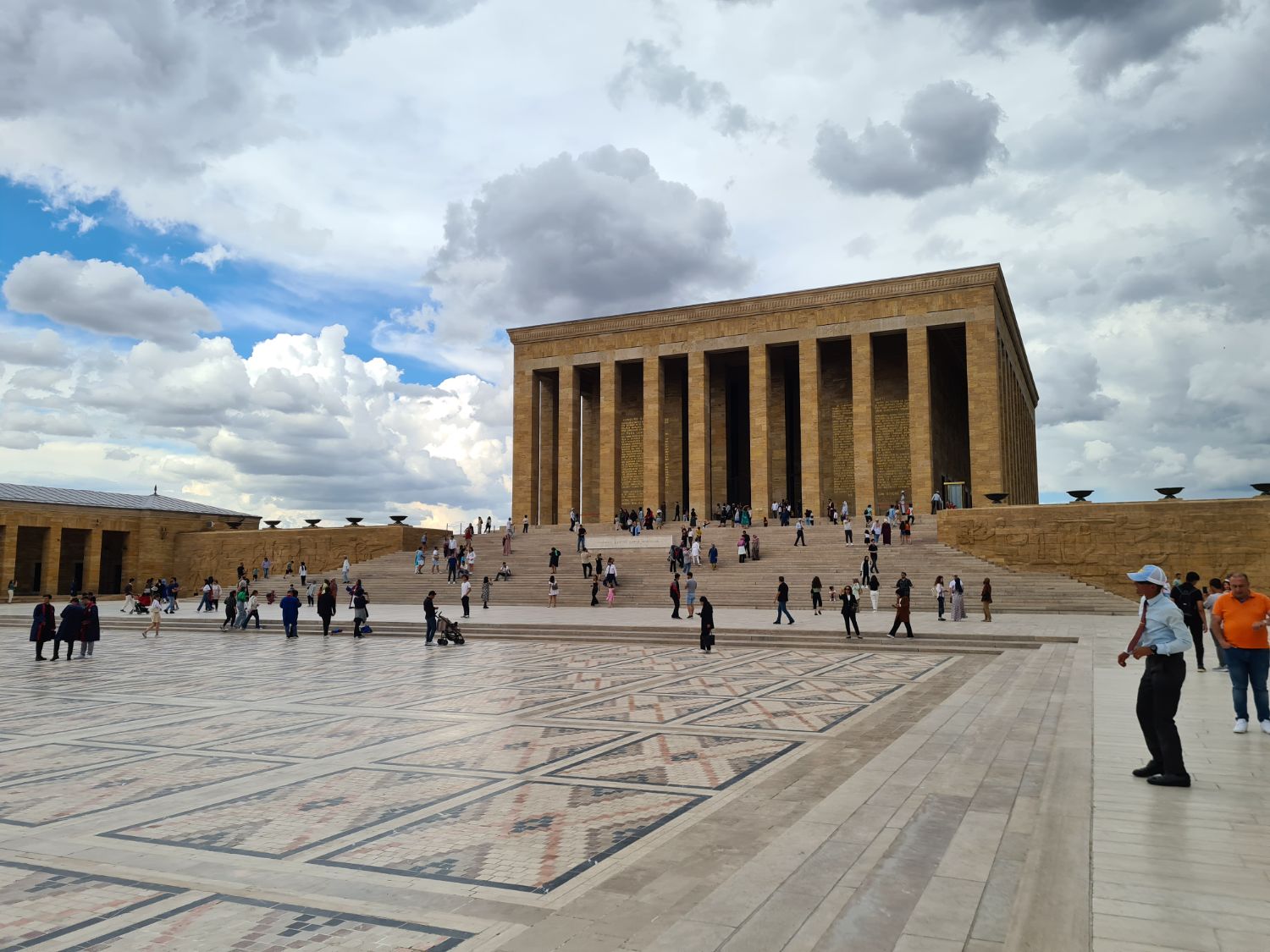 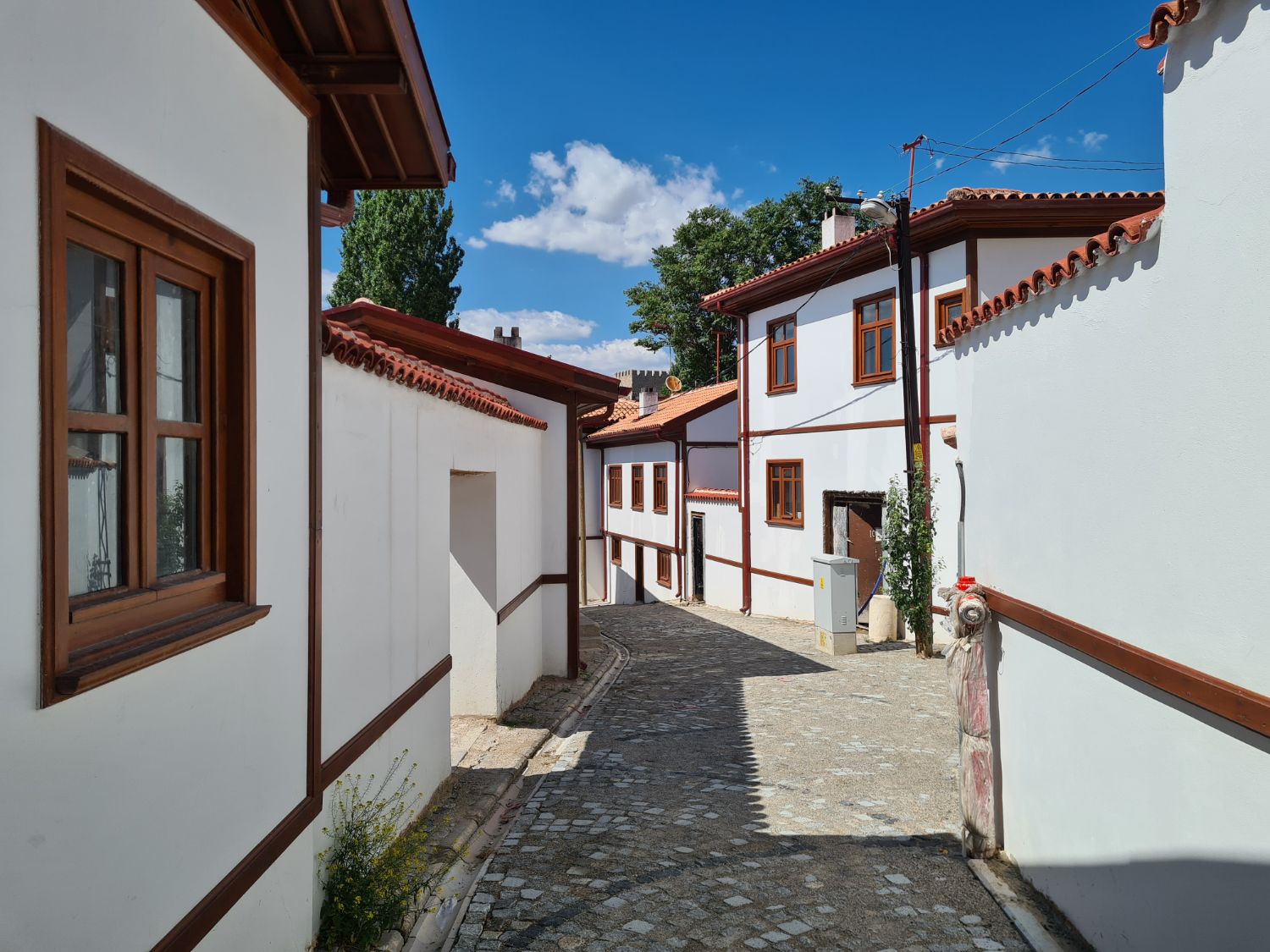 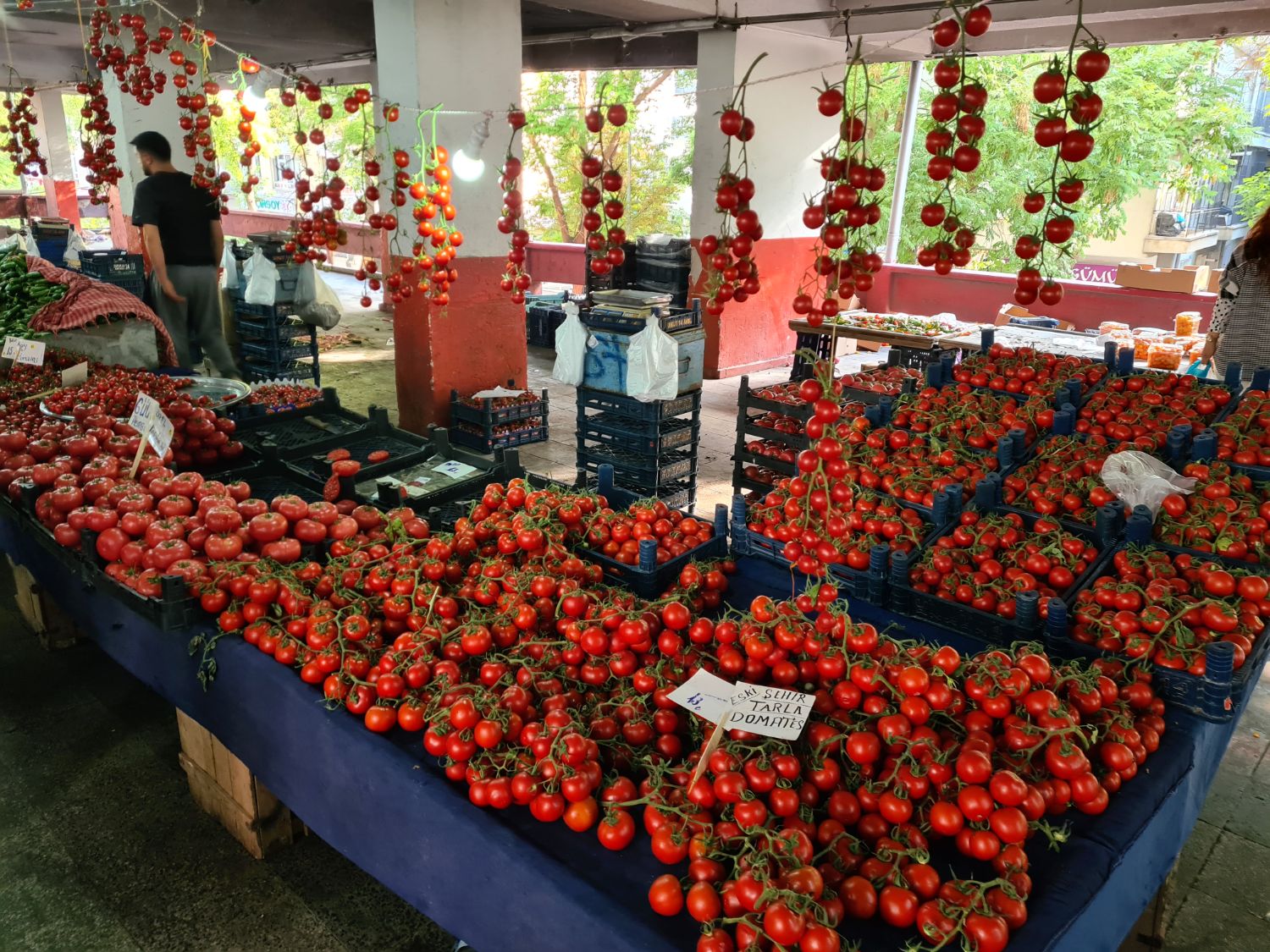 No shortage of tomatoes in this bazaar

Unfortunately, Ankara is not as exciting as Istanbul, although it still has a few nice neighbourhoods and a lot of bazaars. We ended up not doing much while we where there, except for a short trip to the Rainbow Mountains, a few hours away by minibus. It gave us some time to catch up on sleep and read.

Next week, I will post the second part of our adventures in Turkey. 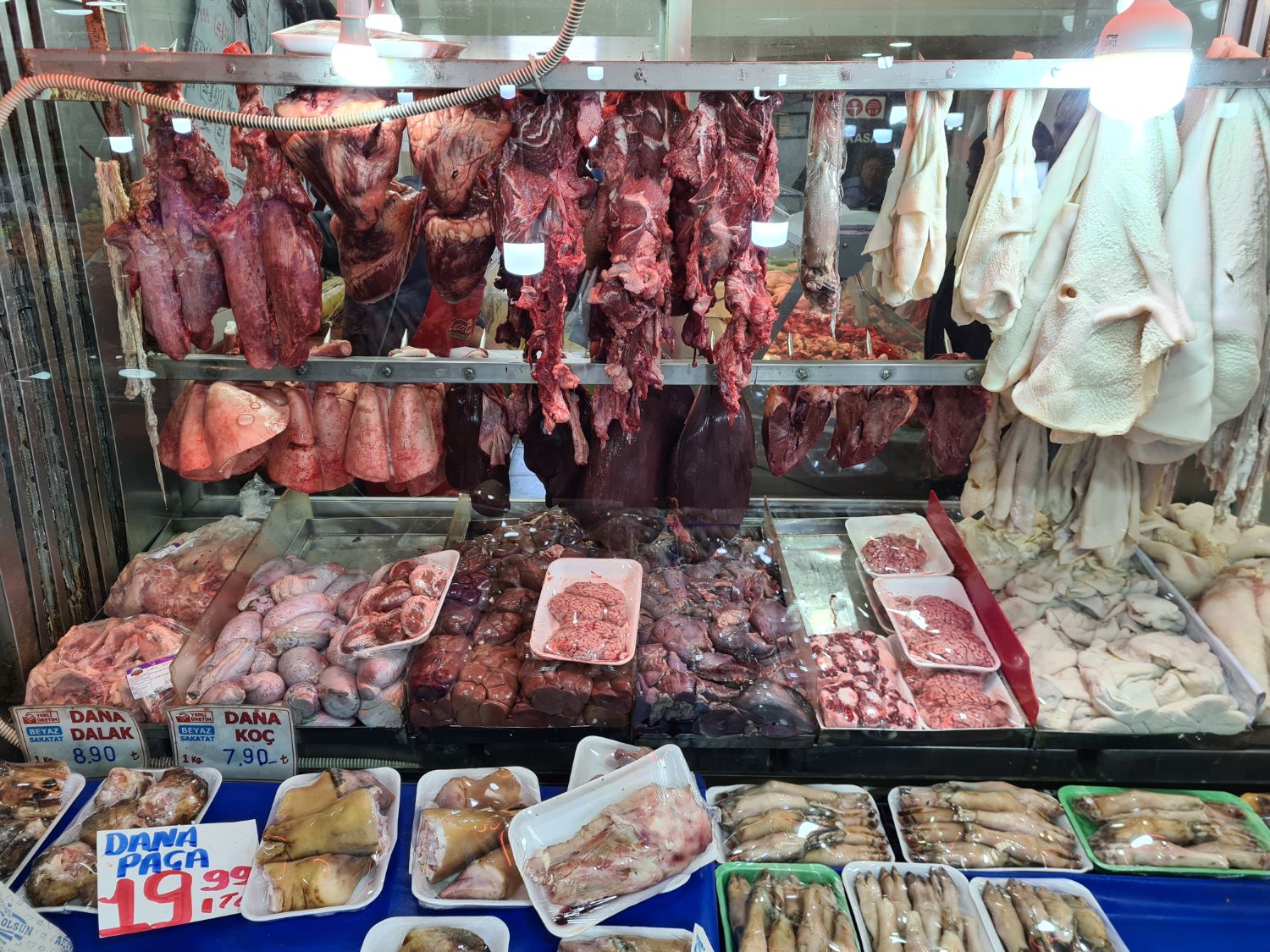 See if you can find all the pars of the sheep 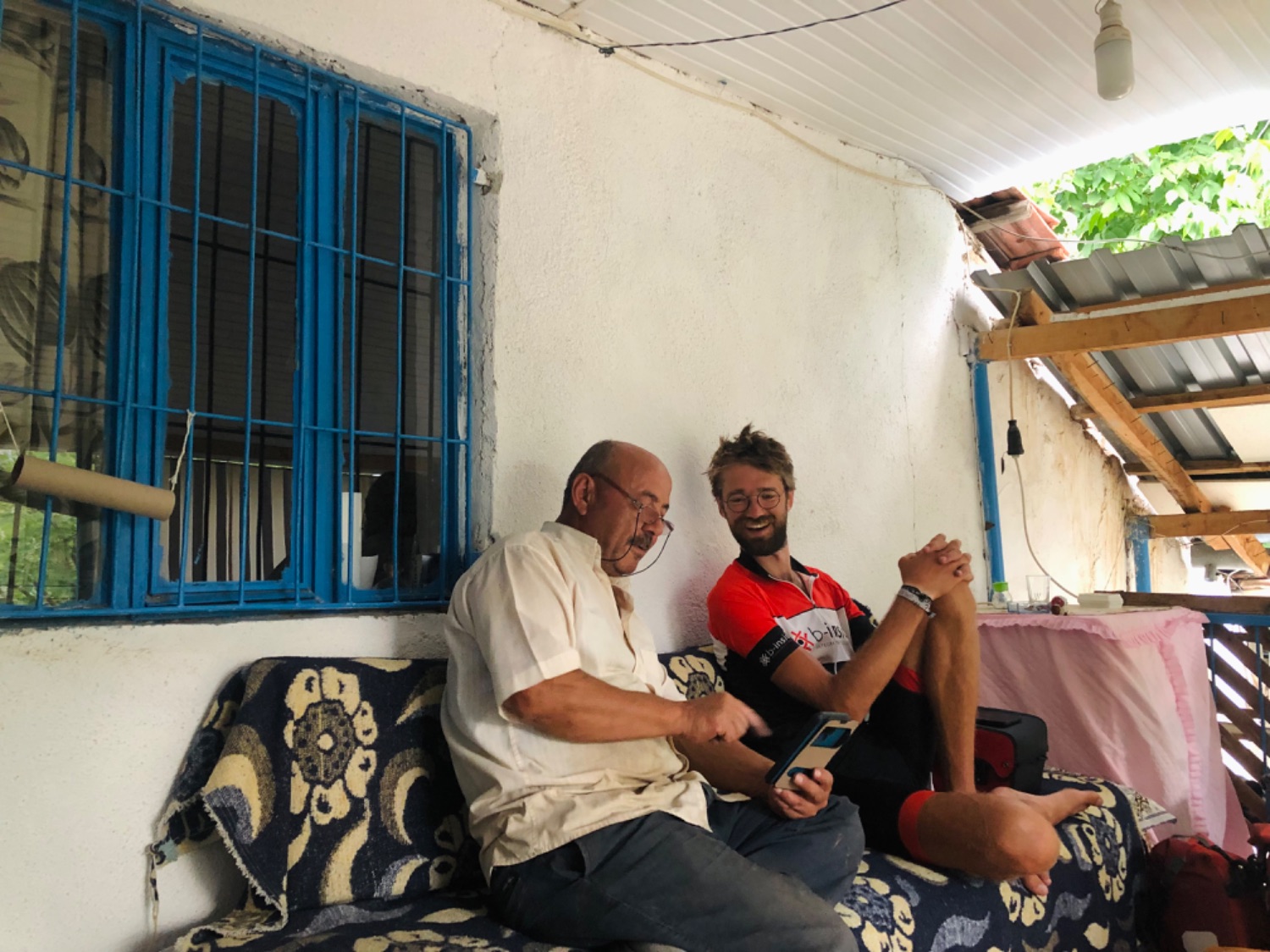 Calling this man’s daughter in The Netherlands, afterwards we got the keys to his house 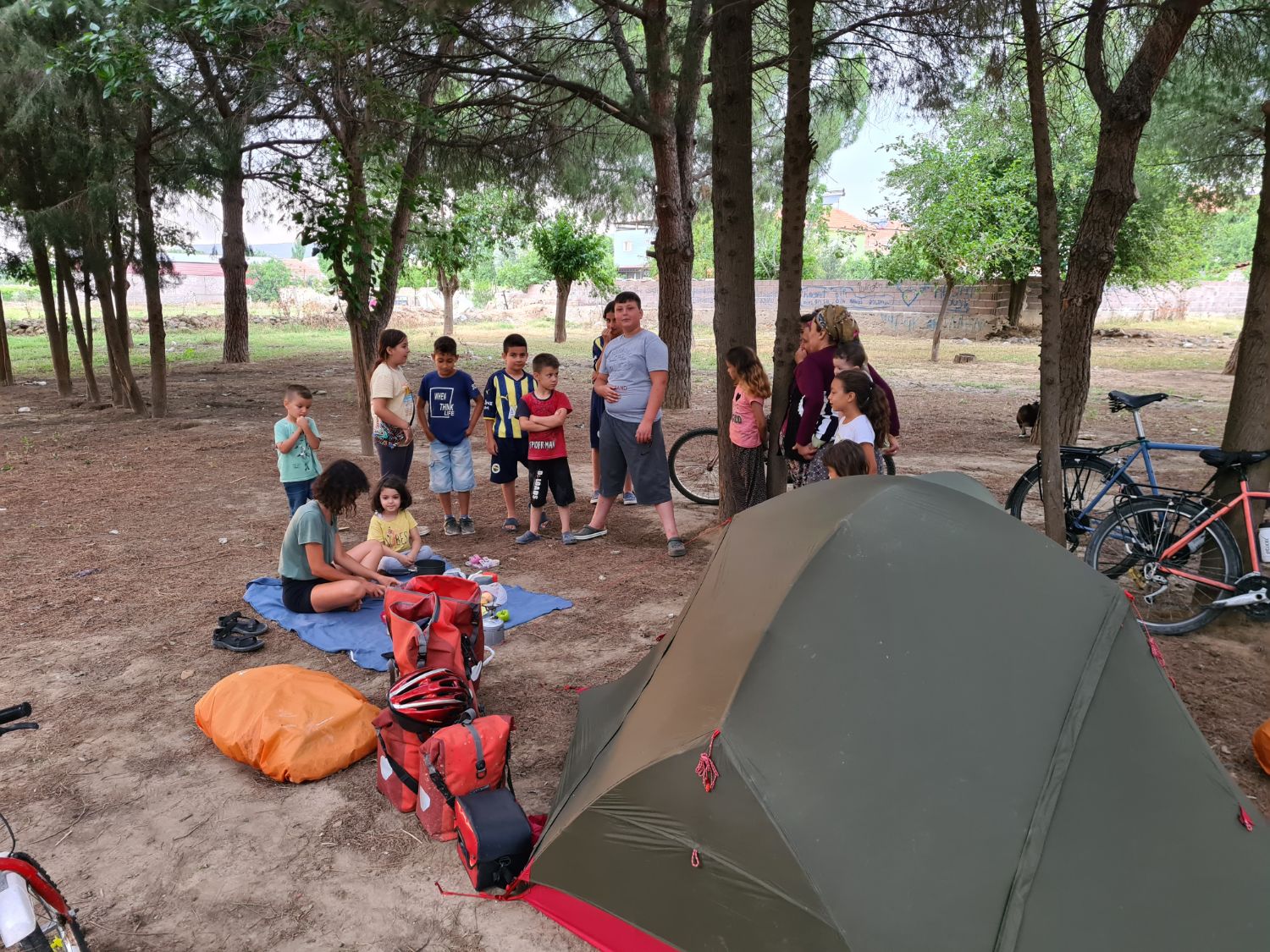 Trying to have a quiet evening is not easy :-) 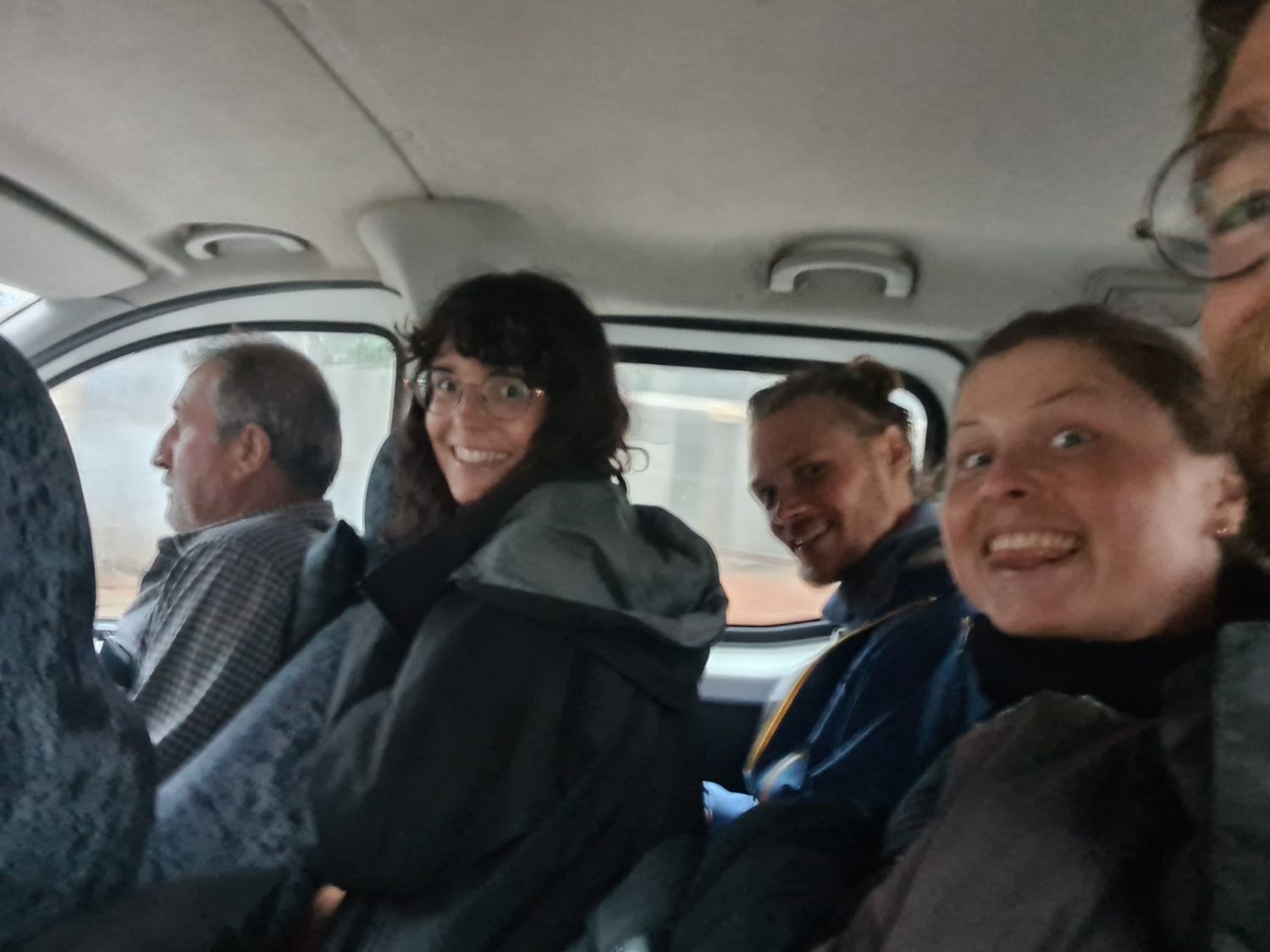 Riding with the mayor, to his farm 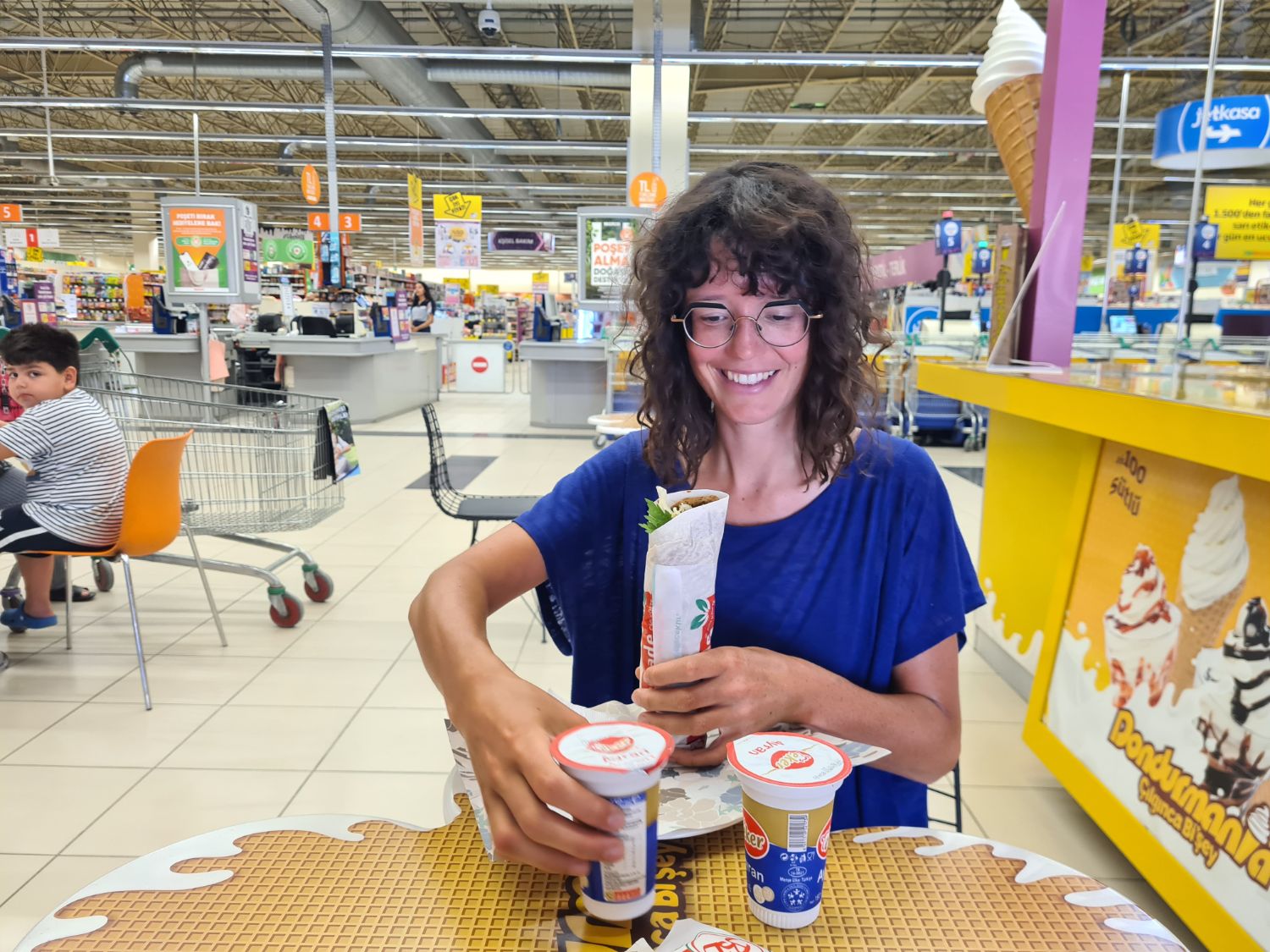 Çiğköfte, our favourite snack, in a not so cosy mall 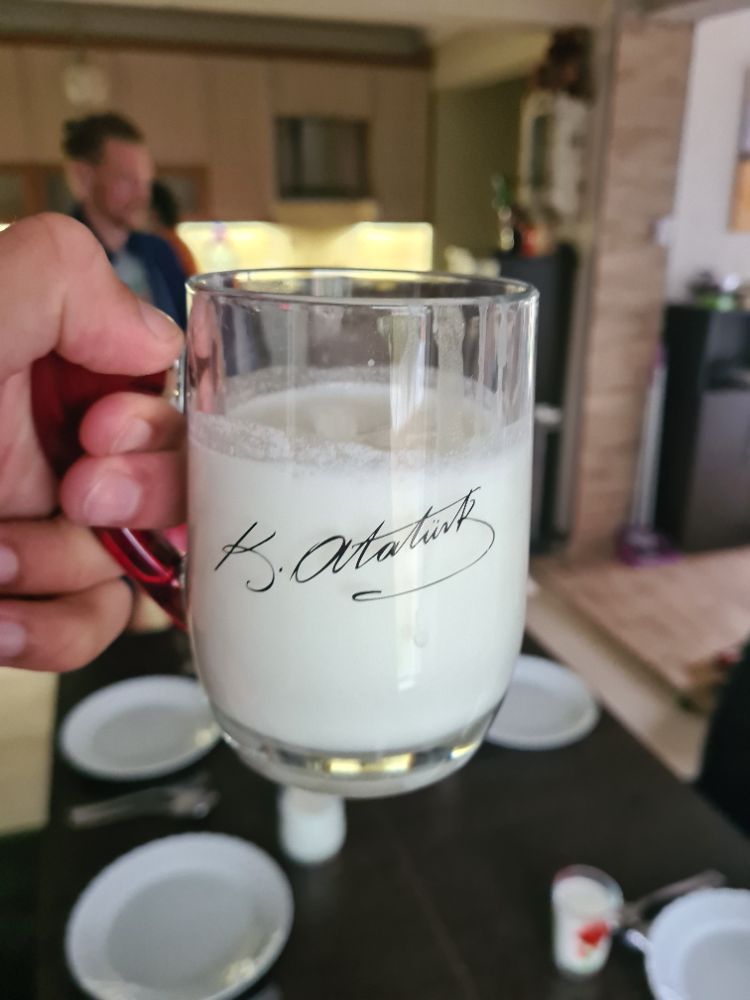 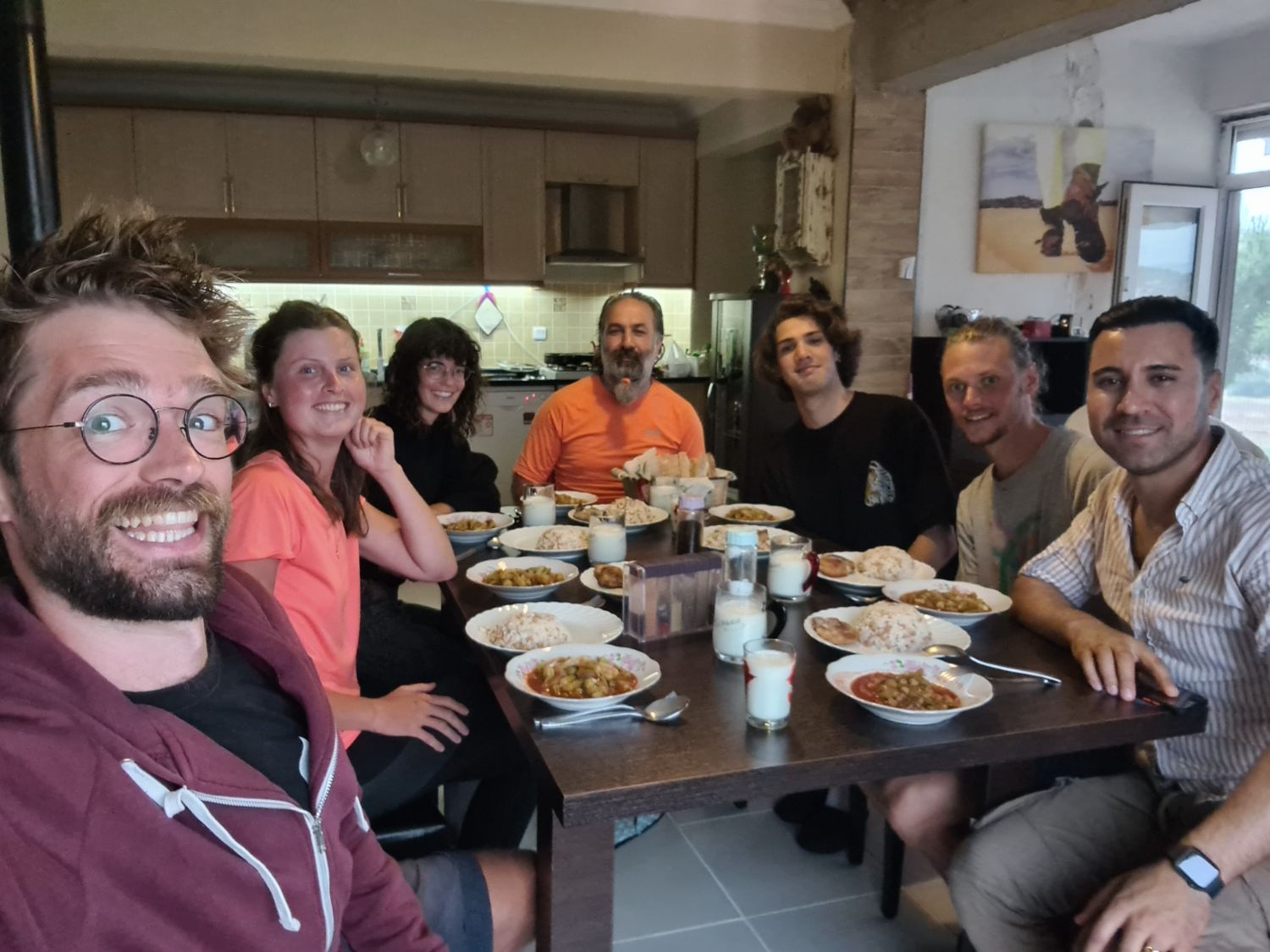 Staying with a father, son and uncle