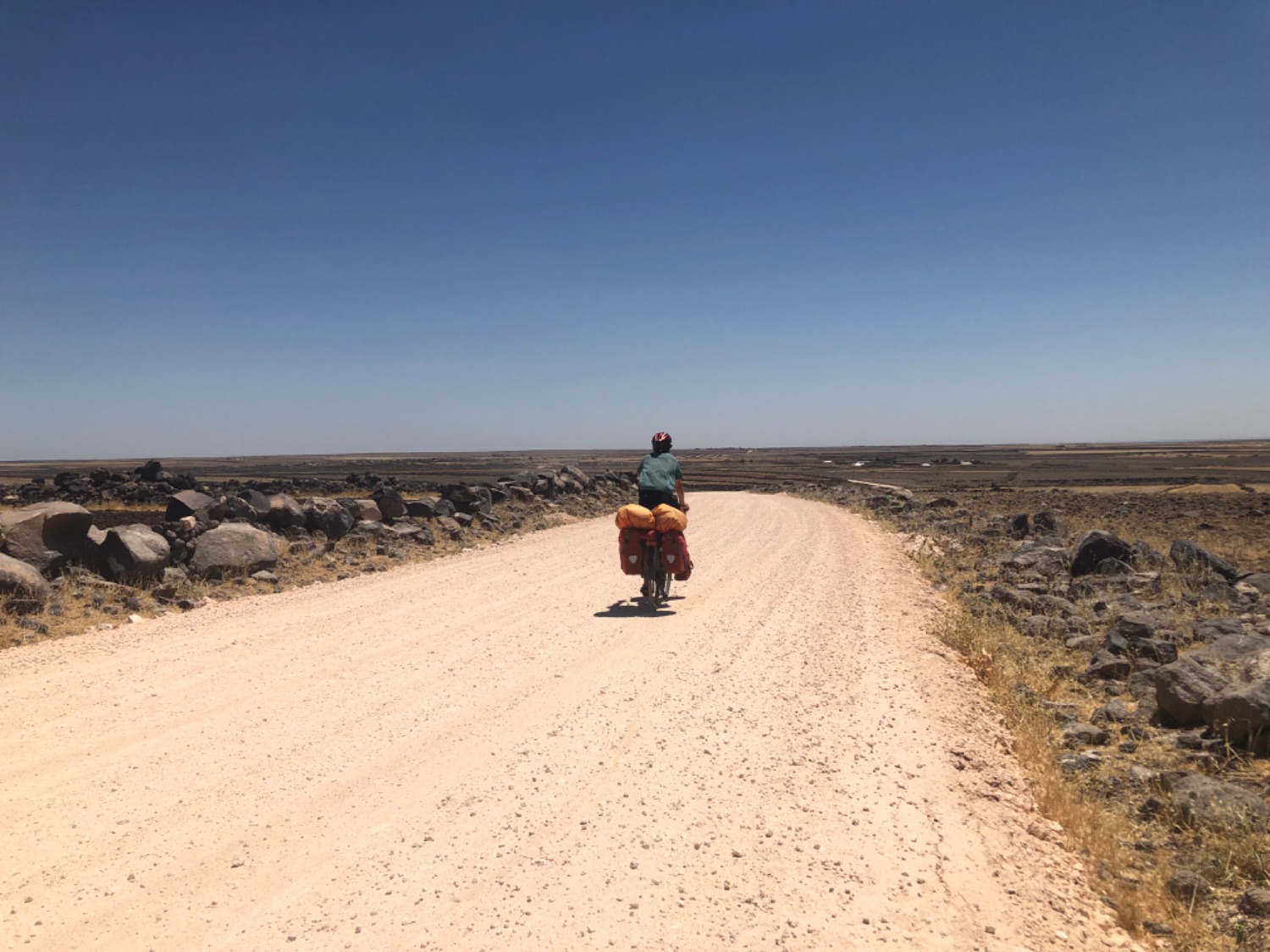 Here's part two of our time in Turkey. From Ankara, we cycled southeast towards Turkish Kurdistan, until we realised we had to change our plans of going to Iran through Iraqi Kurdistan. We took another bus and eventually finished off Turkey in the northeast, before reaching the Black Sea and crossing the border to Georgia. 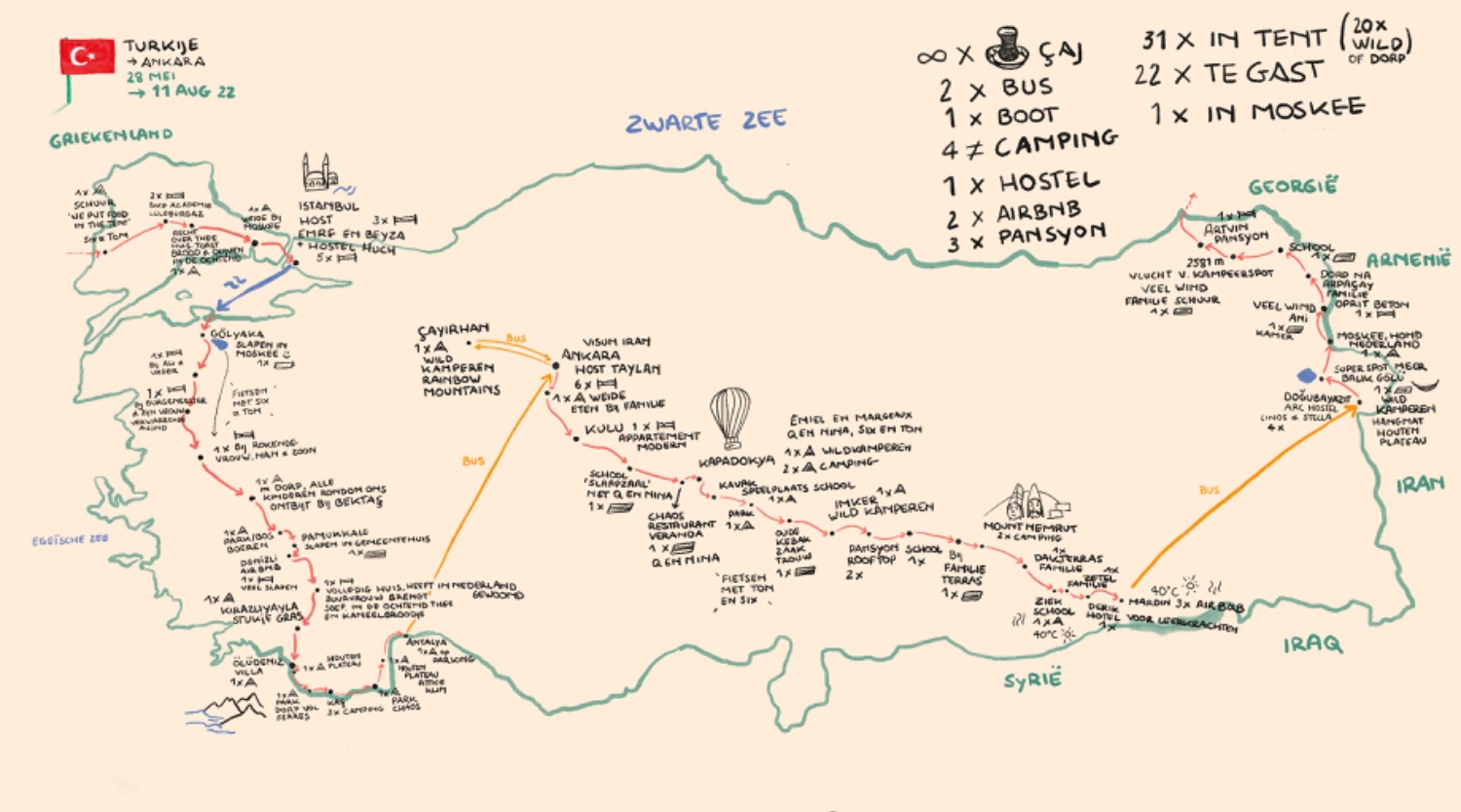 Our route in Turkey

We stayed in Anakara for a week and were very happy to finally leave after we excitedly picked up our visas for Iran. Cycling out of Ankara was not the most enjoyable, with some very busy and steep roads and hot weather. But, after an hour or two we crossed the last ring road and were suddenly between fields and villages again.

It wasn’t long before the invitations for tea started again, and in the late afternoon we were invited by a family for some good food and a nice conversation. They showed us to a nice quiet place to camp, and even wanted to help setting up the tent. 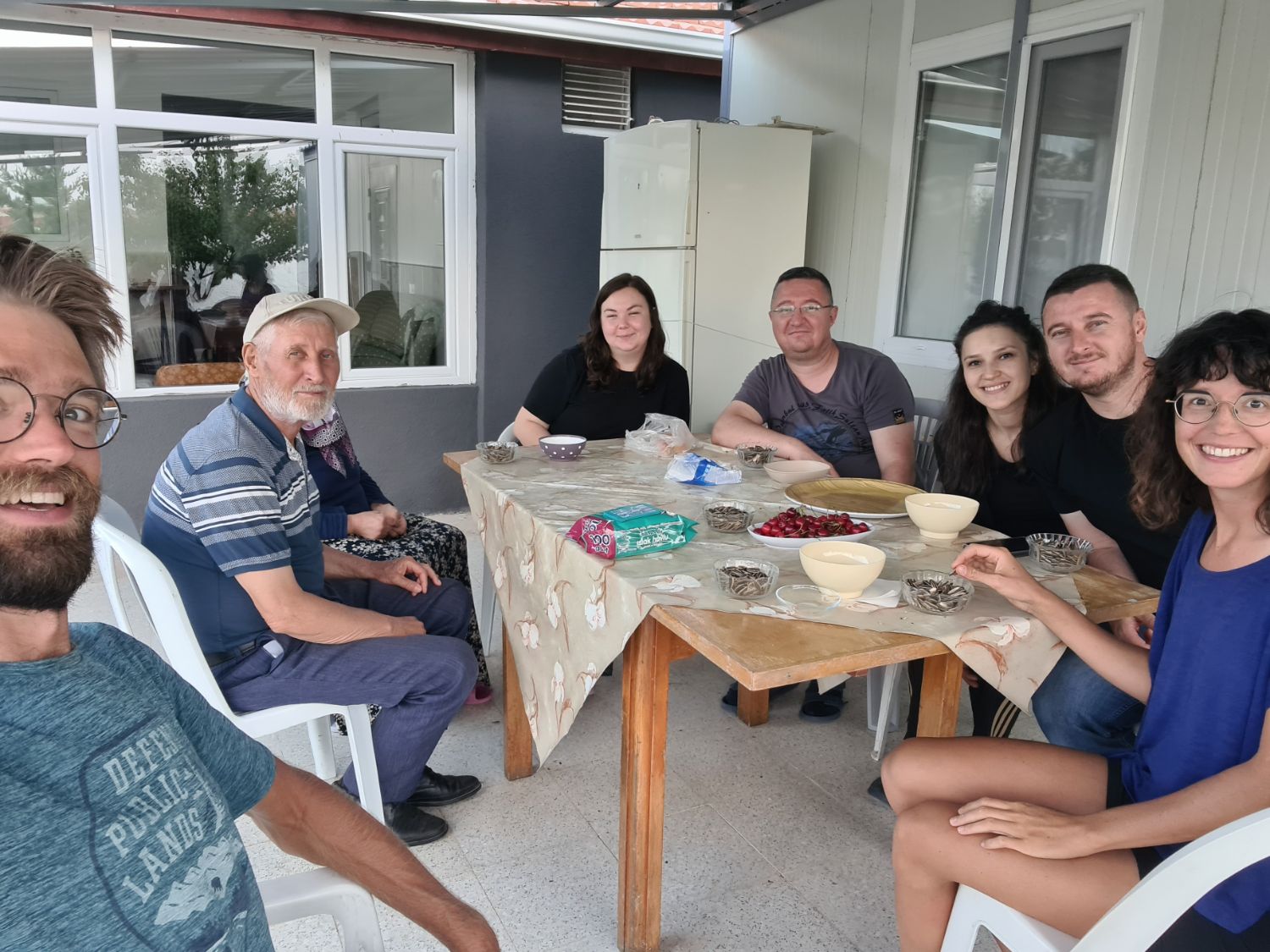 A few days later we crossed Tuz Gölü, or Salt Lake, to the south of Ankara. It was an impressive sight to see. On one side of the road the lake was stopped by the mountains, on the other side the lake seemed endless and melted together seamlessly with the sky. 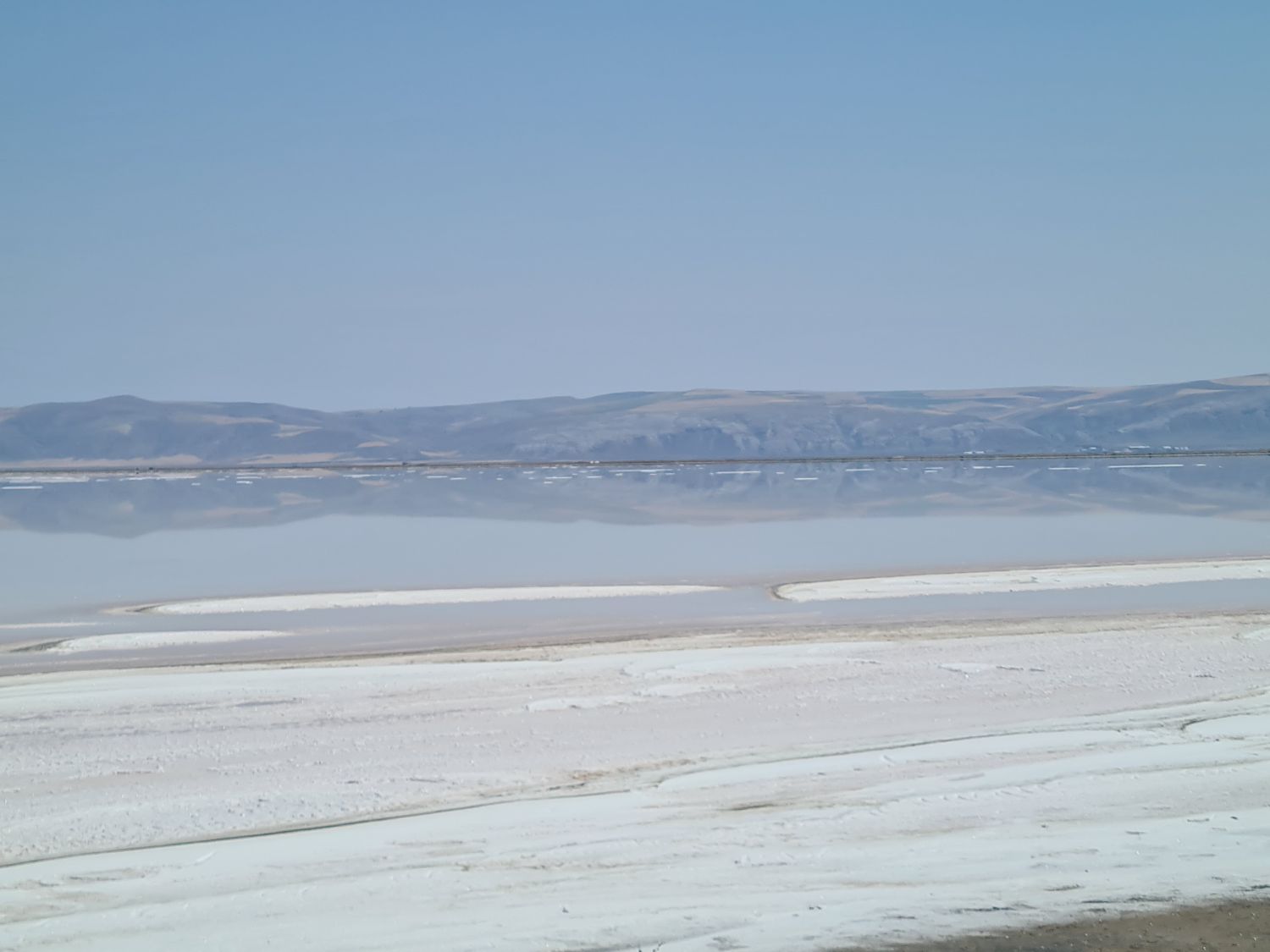 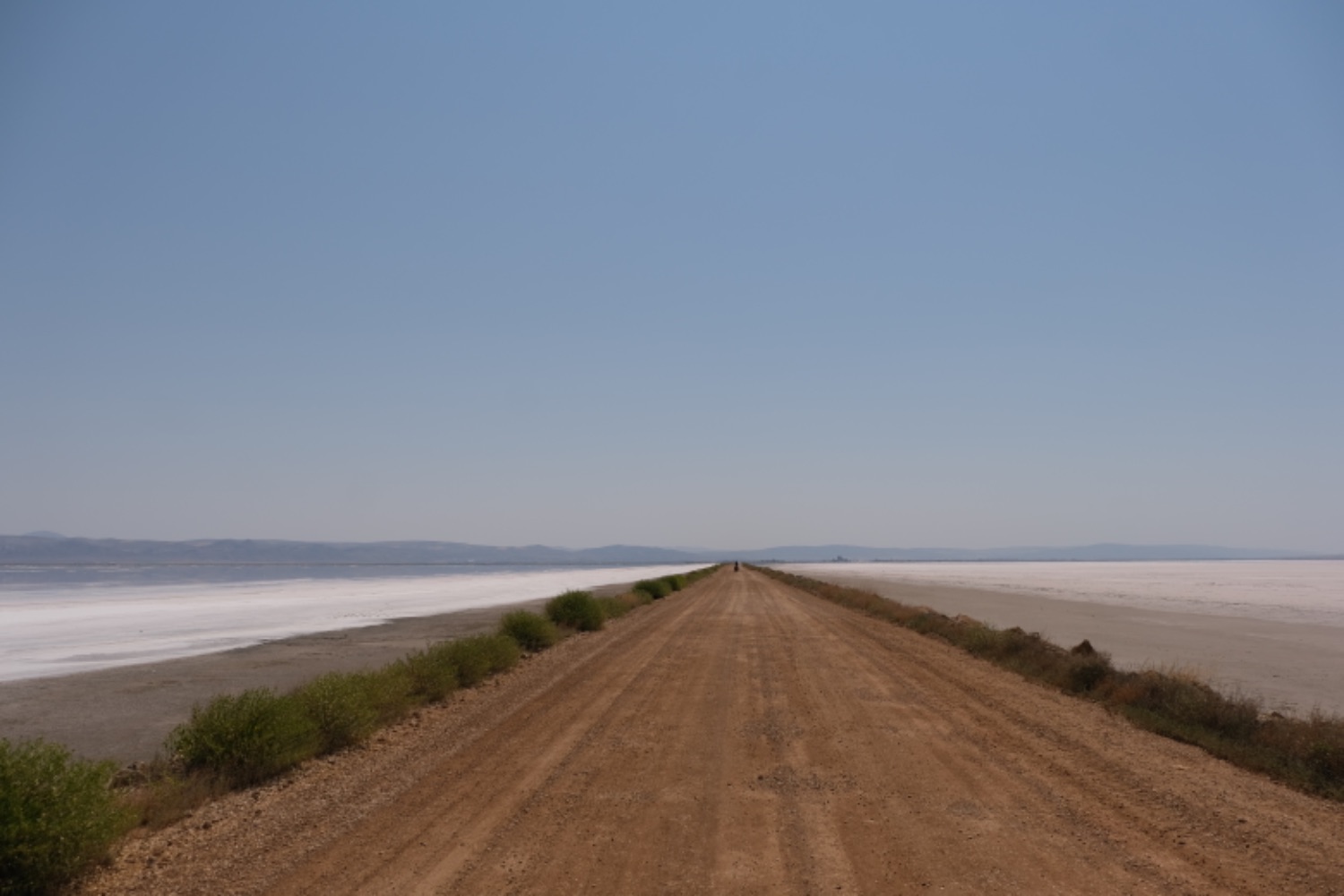 What followed was one of the most tiring roads so far: a 10 km straight and bumpy road, through the heat with a headwind. But we soon forgot it when we bumped into Nina and Q, a Dutch couple we met briefly a few weeks before. They had also cycled with Six and Tom before, so we decided to cycle together until Kapadokya, where we would meet up with them. 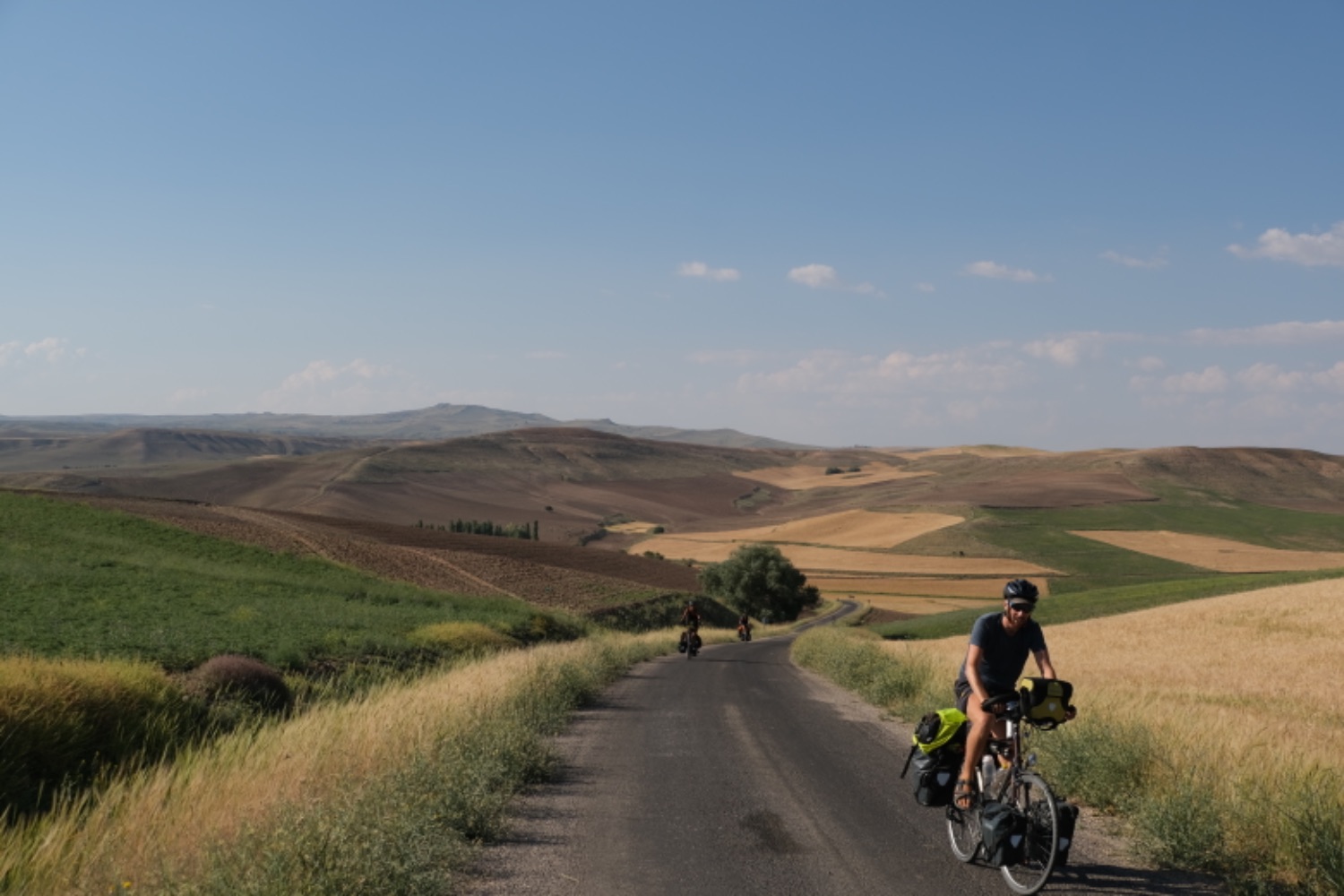 Cycling with Nina and Q

On the way there, we first had a quiet night in a school (they’re empty because of summer holidays). Only to have the complete opposite experience the day after.

During this time, the Eid al-Adha, Kurban Bayram or sacrifice feast, was being celebrated. A lot of the Turkish diaspora returns to their families’ home town to celebrate the holiday. We arrived in a village where one such family was getting together on a street corner. Within 5 seconds we where surrounded by everyone and were being bombarded with so many questions in Turkish, French, German and English. While, in the meantime, our hands were being stuffed with lemonade, tea and candies.

We ended up staying with one of the families, but not before we got into a car and raced to a restaurant about 30 kilometers from the village. With some convincing we managed to slow the driver down to the maximum allowed speed limit and arrived alive and well in the restaurant. Because I was the only one speaking French, and had the best Turkish, I was sat in the middle of the table and had to do some interpreting work, while trying to get some of the delicious food. 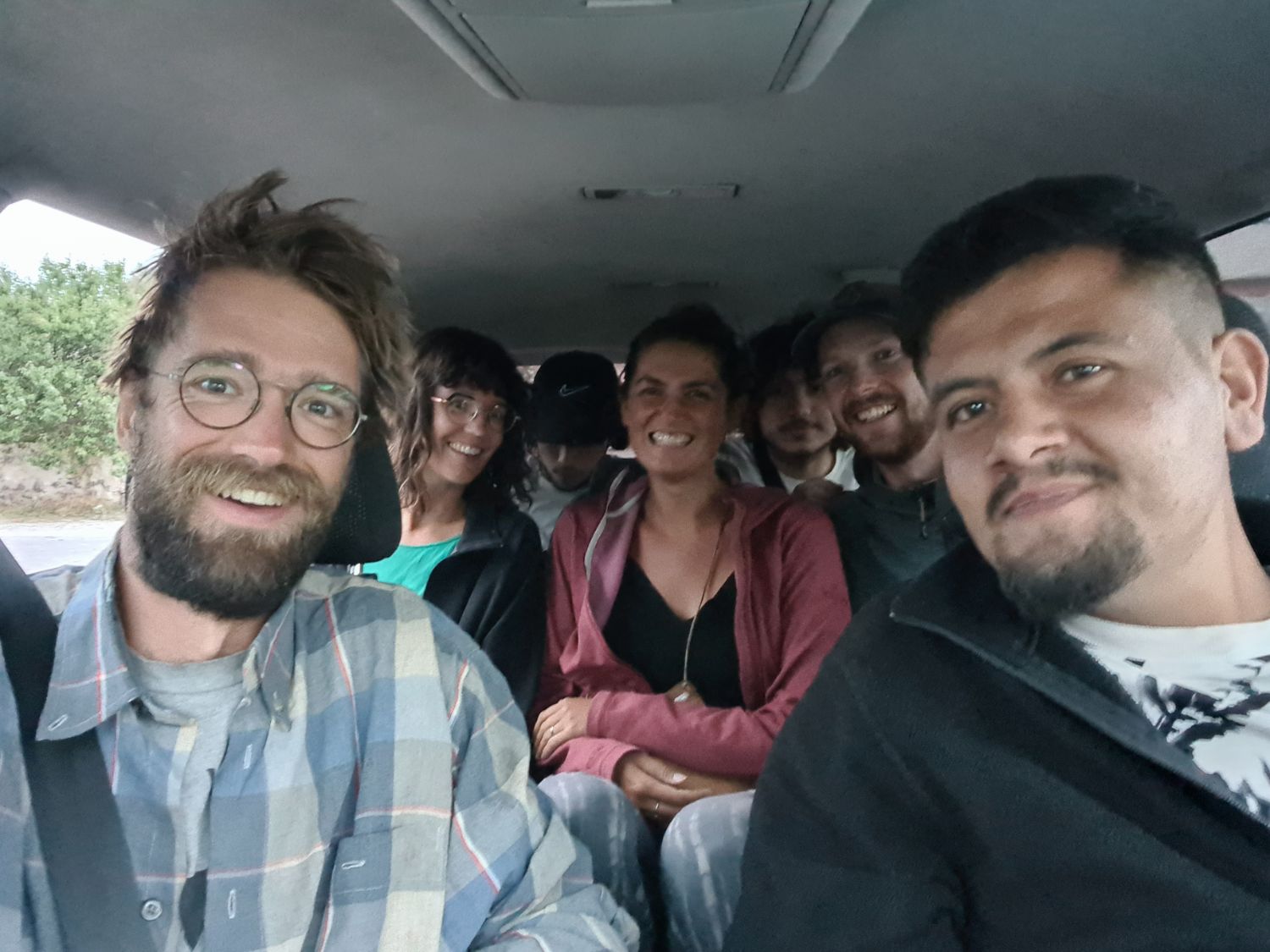 Looking happy, not knowing the driving style yet... 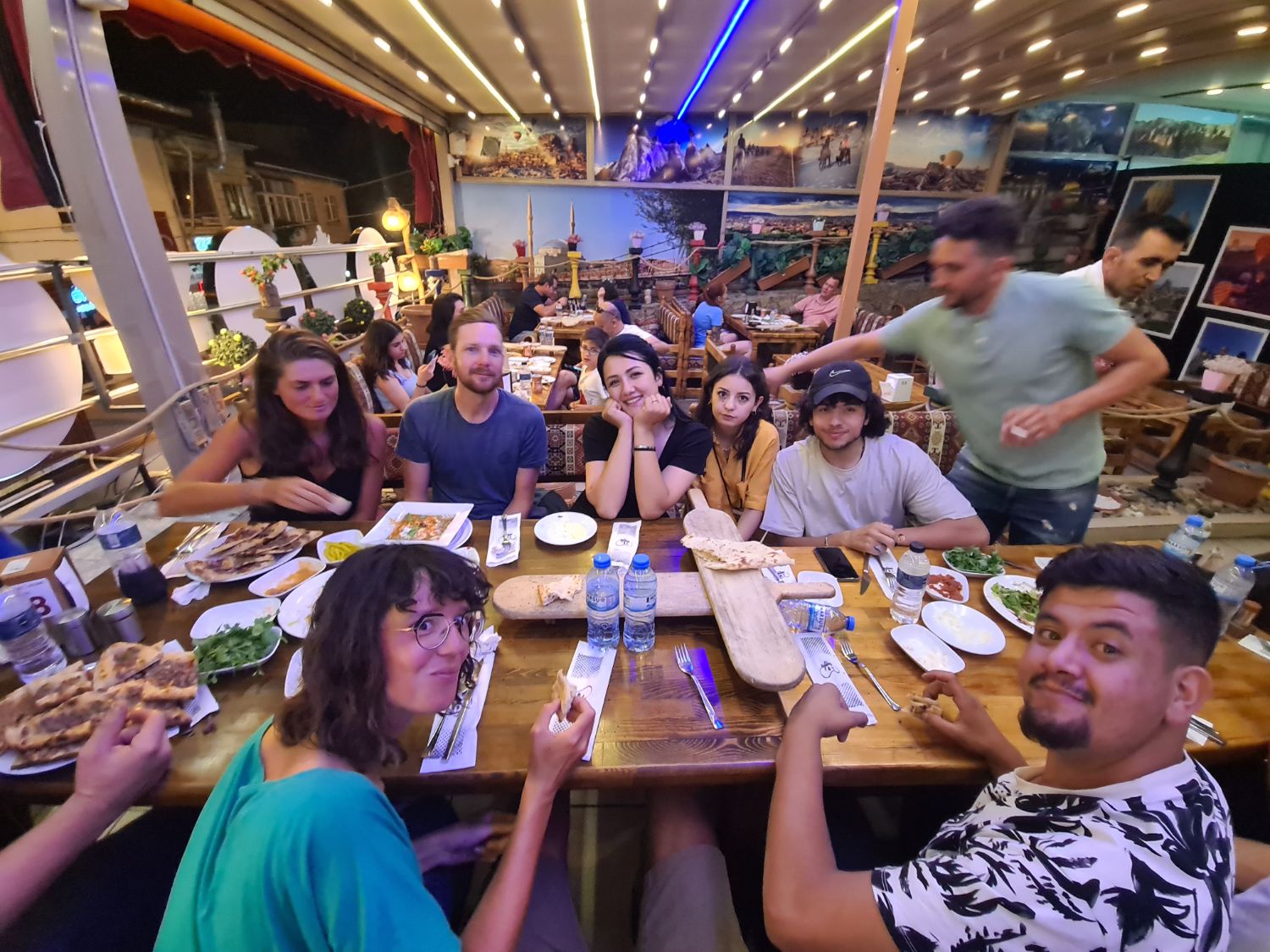 Tasty dinner with the family

Before we knew it, we were back in the village and installed ourselves on the balcony/living room. One more tea, and a friendly refusal of coffee, at 23:00, we finally managed to lay down and try to sleep. But not before one last surprise: our host, Haarun, closed the window because it was too cold, lit up a cigarette and started watching some video’s. The evening was intense, funny and weird. We had a good night. 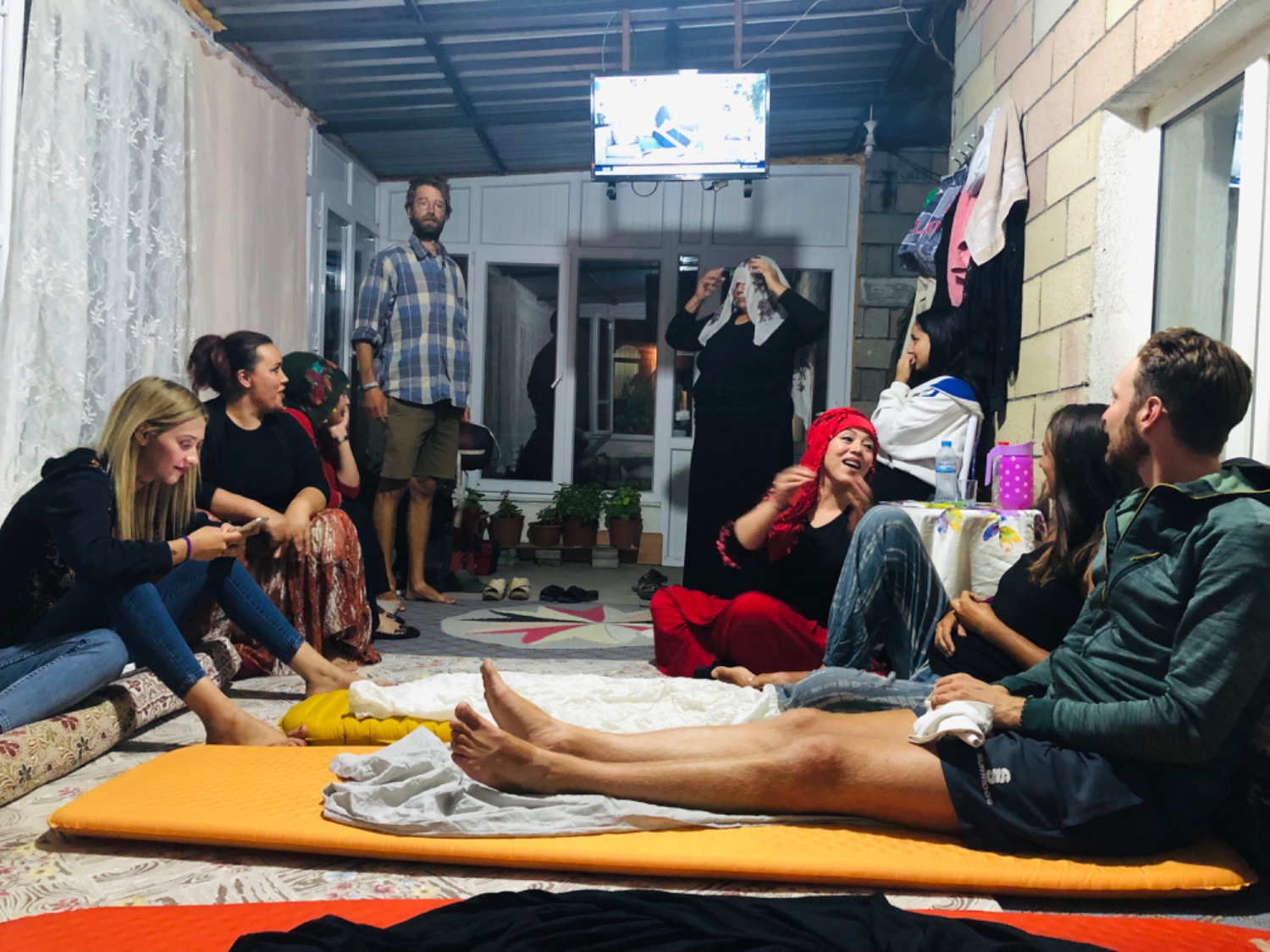 Waiting to go to sleep

Then came the classic among all cycle tourers: Kapadokya. A Unesco protected national park with amazing unique landscapes, lots of opportunities for wild camping and great sunsets with hundreds of hot air balloons. I’ll leave it up to the photos: 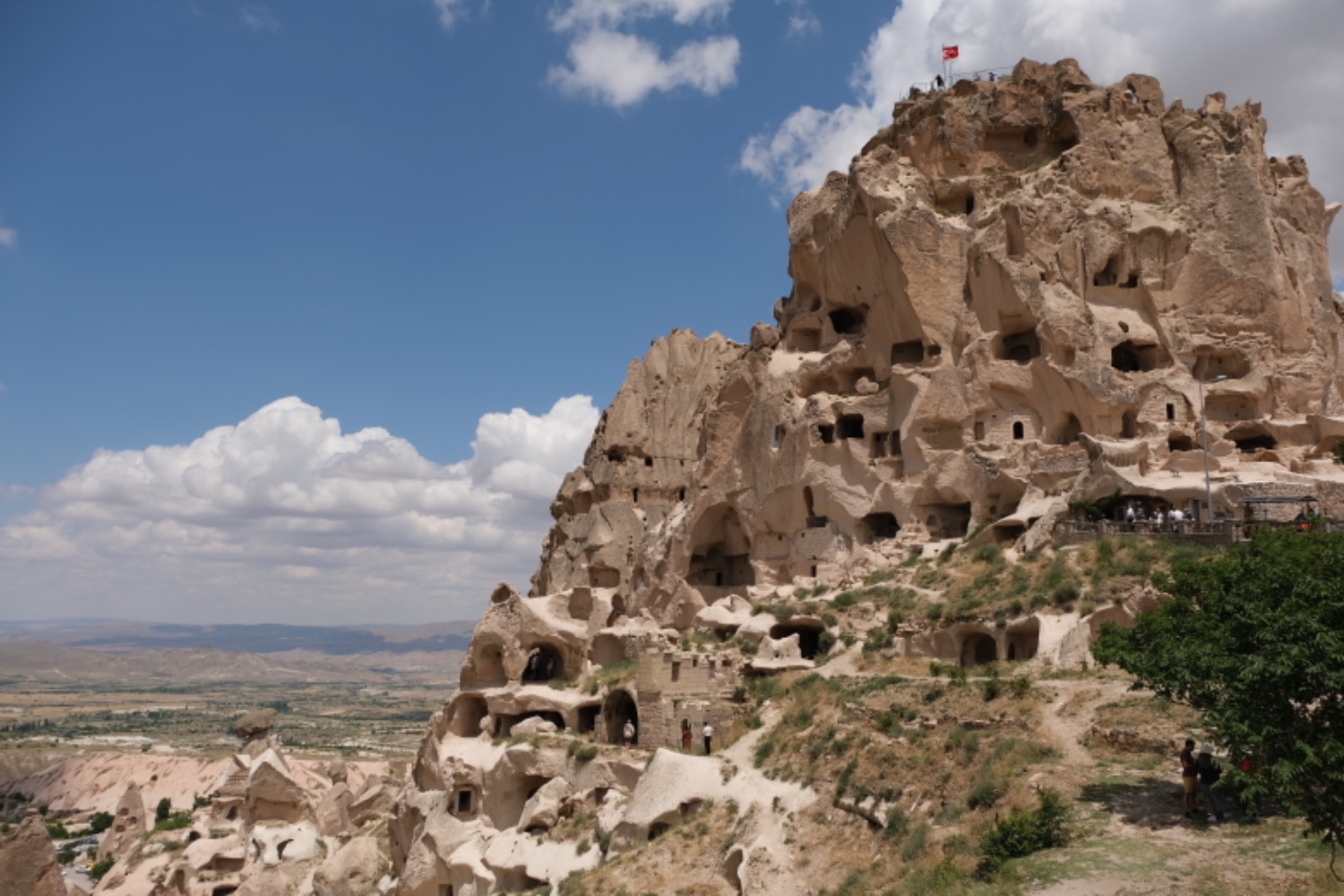 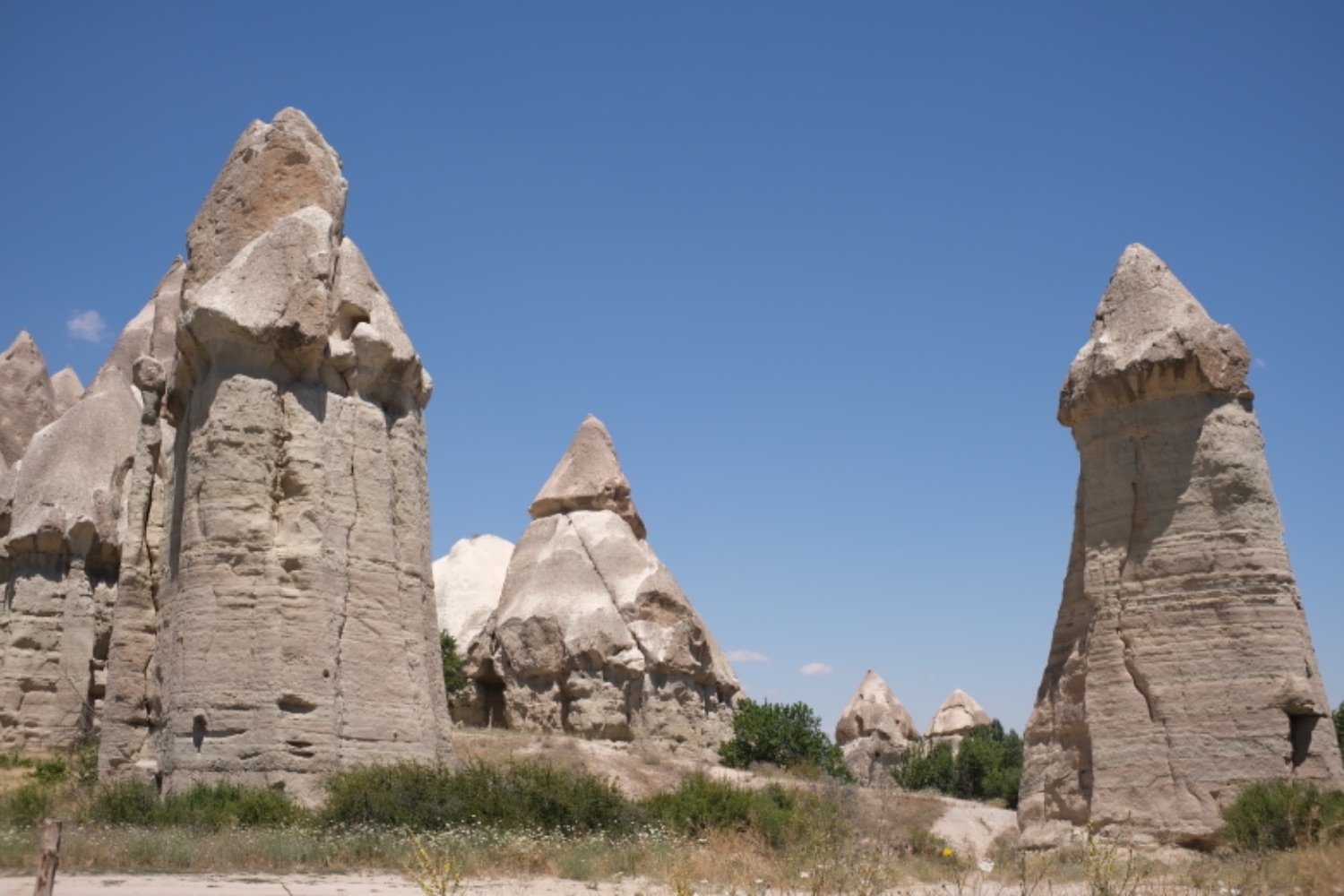 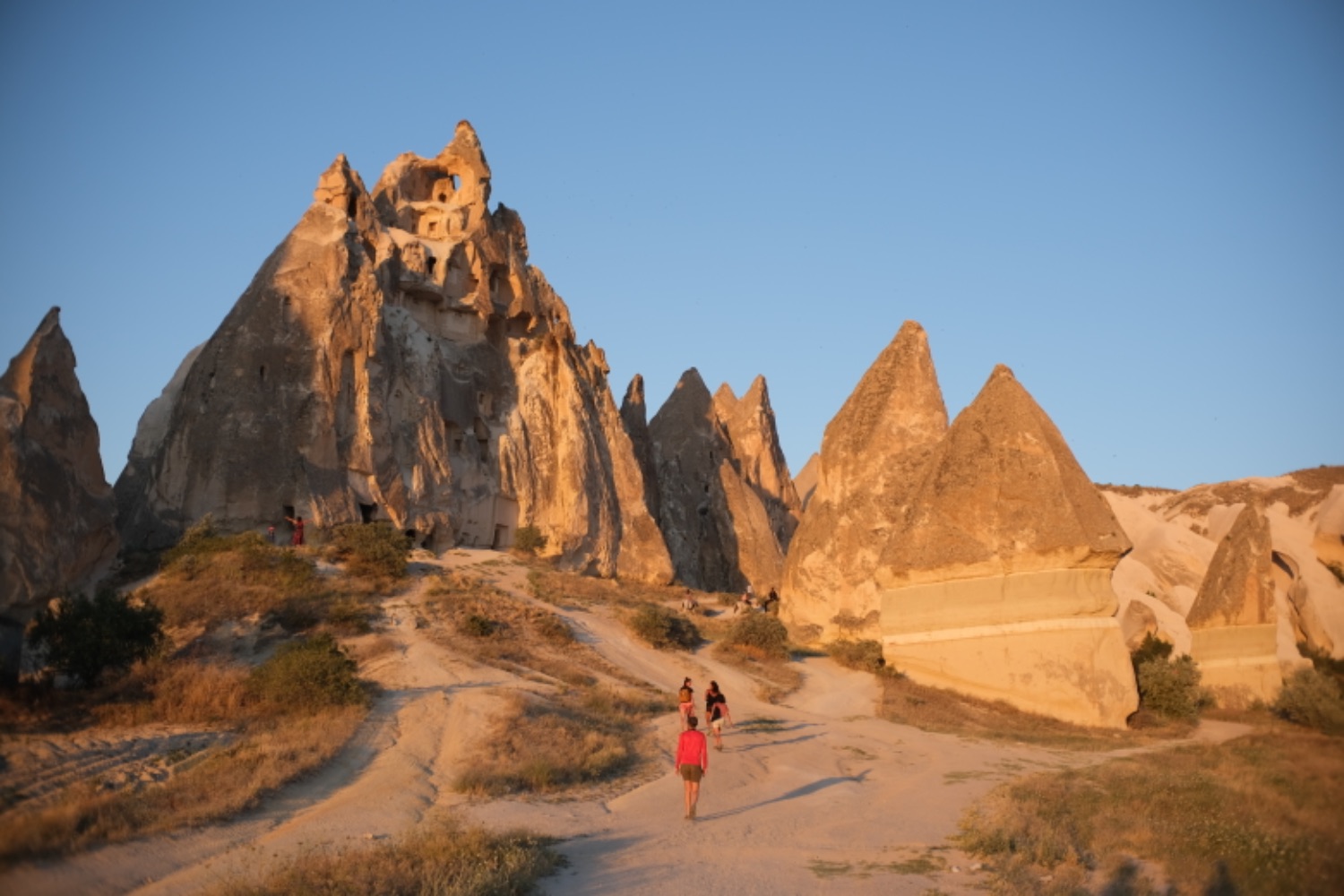 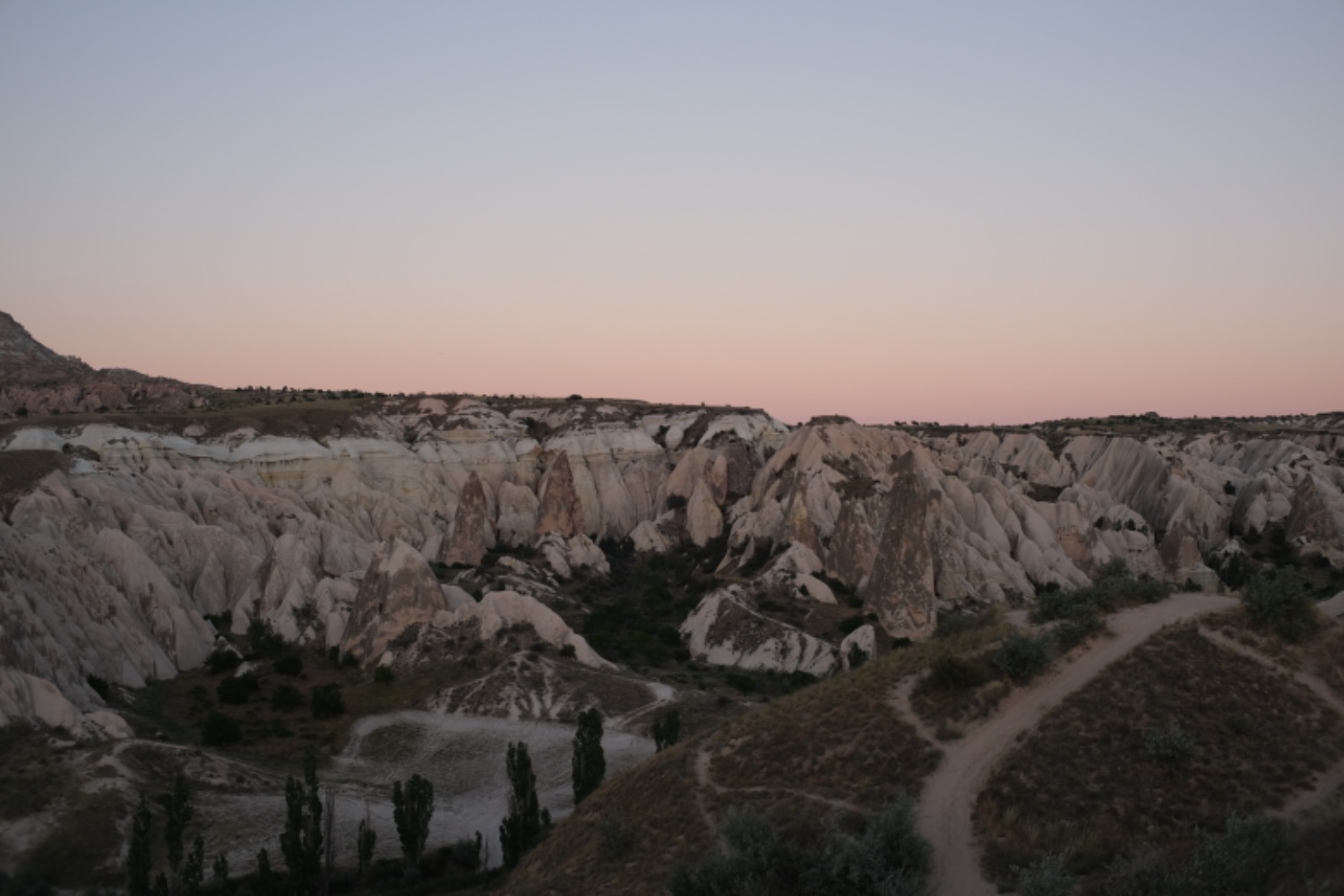 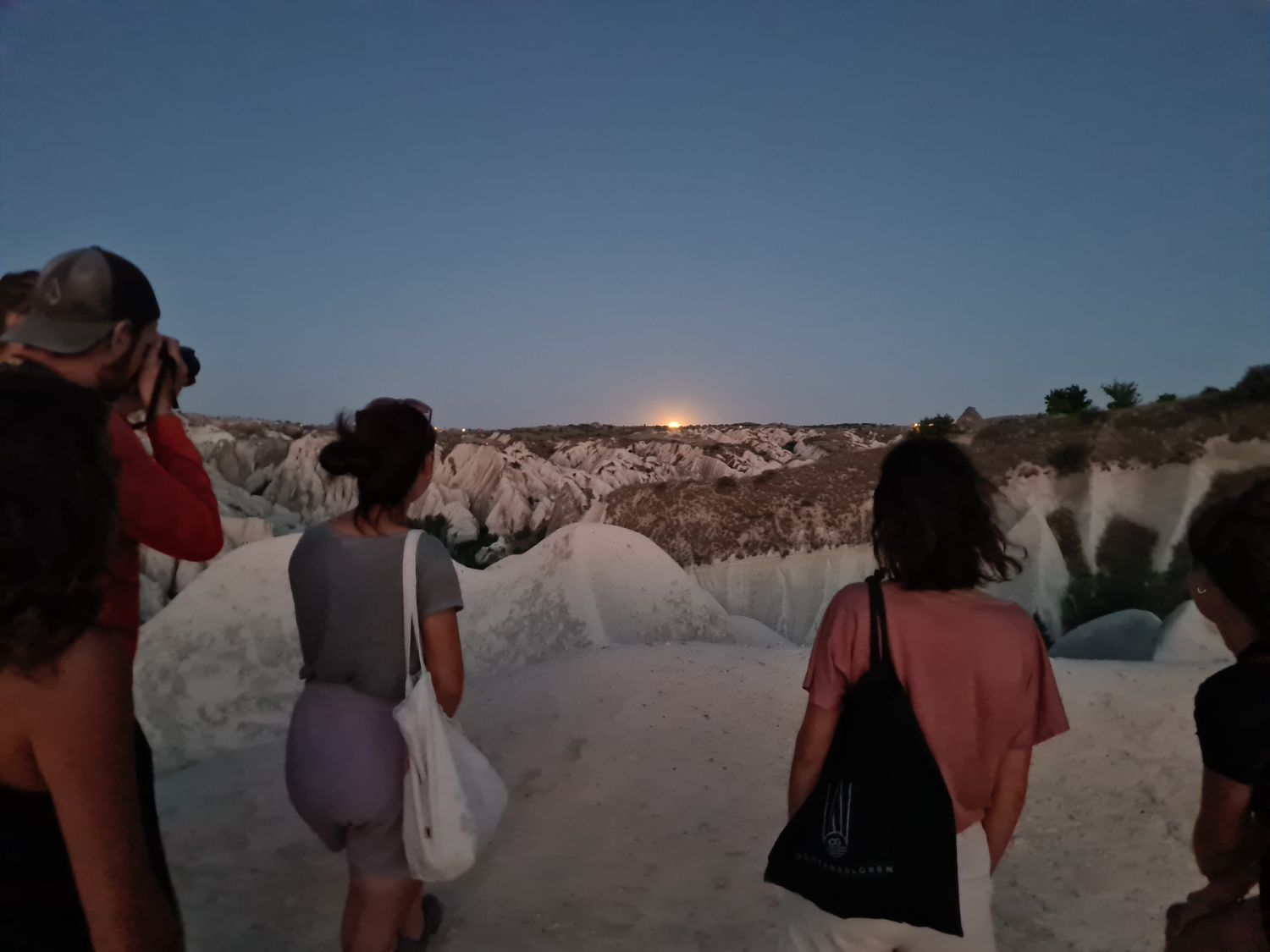 Enjoying a moon rise over Kapadokya

Since Ankara, we were cycling on the Anatolian plateau and hadn’t been below 900 meters of elevation. This meant that, although the temperature was going up every day, we could still manage the heat, especially at night when it could even be “cold”.

But that couldn’t last forever unfortunately. We were going south slowly, and at one point we had to get off the plateau. This happened right after we bravely submitted mount Nemrut with the bike (without luggage). When we finally descended and crossed the Eufrat river, the temperature easily reached 40 degrees after noon, and remained high until the sun went down. 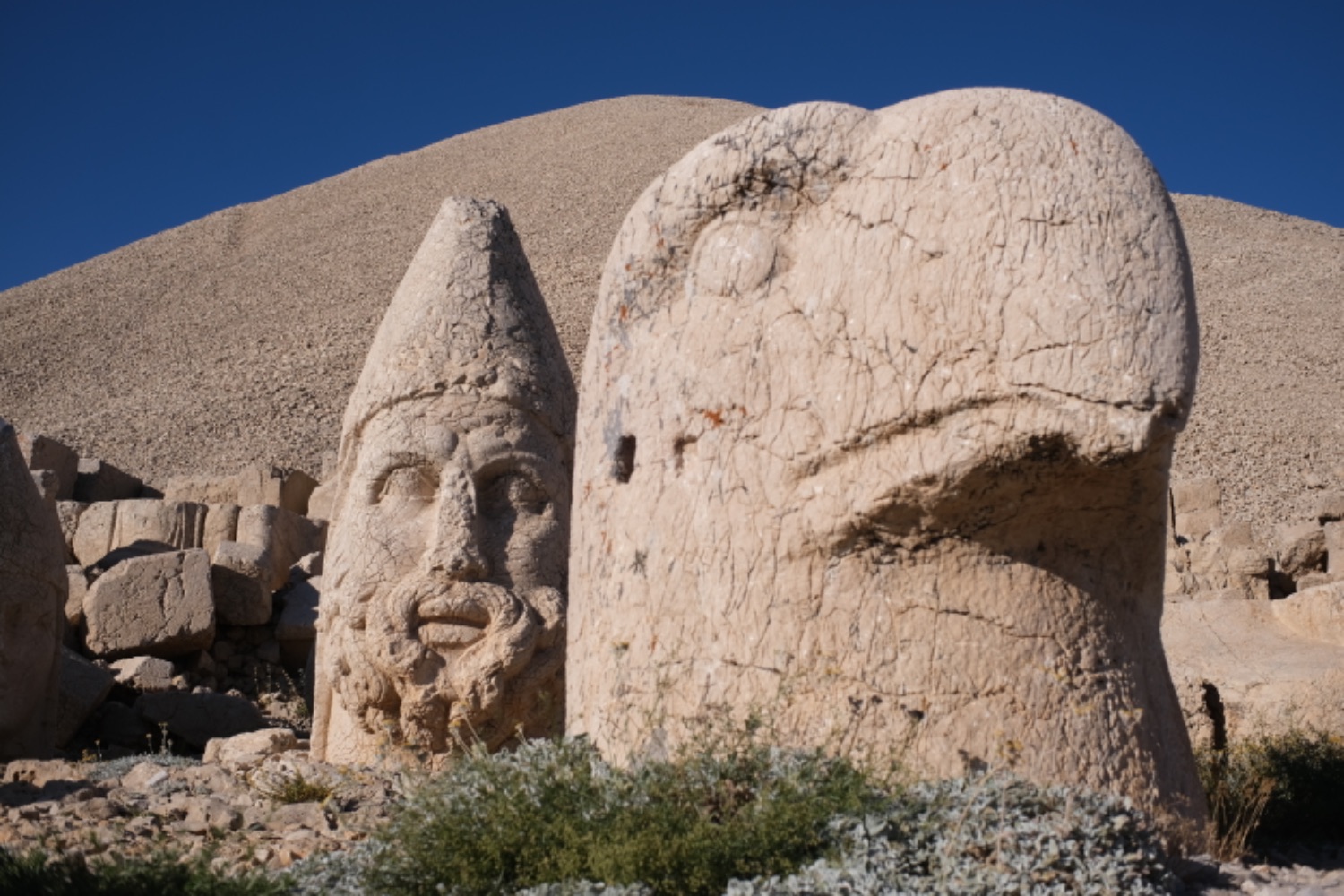 Combine this with a treeless environment and you can imagine this made for some difficult days of cycling. We tried getting up early and make the most out of the relative coolness of the morning, although the temperature was already 25°C at 6 o'clock. So, for a few days, our schedule was to get up at sunrise, cycle until 10 or 11, then take a very long break and try to get in a few more kilometers in the evening.

We were now cycling in Turkish Kurdistan. Although the Turkish government doesn’t allow any display of Kurdish culture and traditions, people were very proud to tell us they were Kurdish, and most people we met were Kurds, in this region. They spoke Kurdish among themselves, but luckily still spoke Turkish with us. By now, we managed to express ourselves quite well. 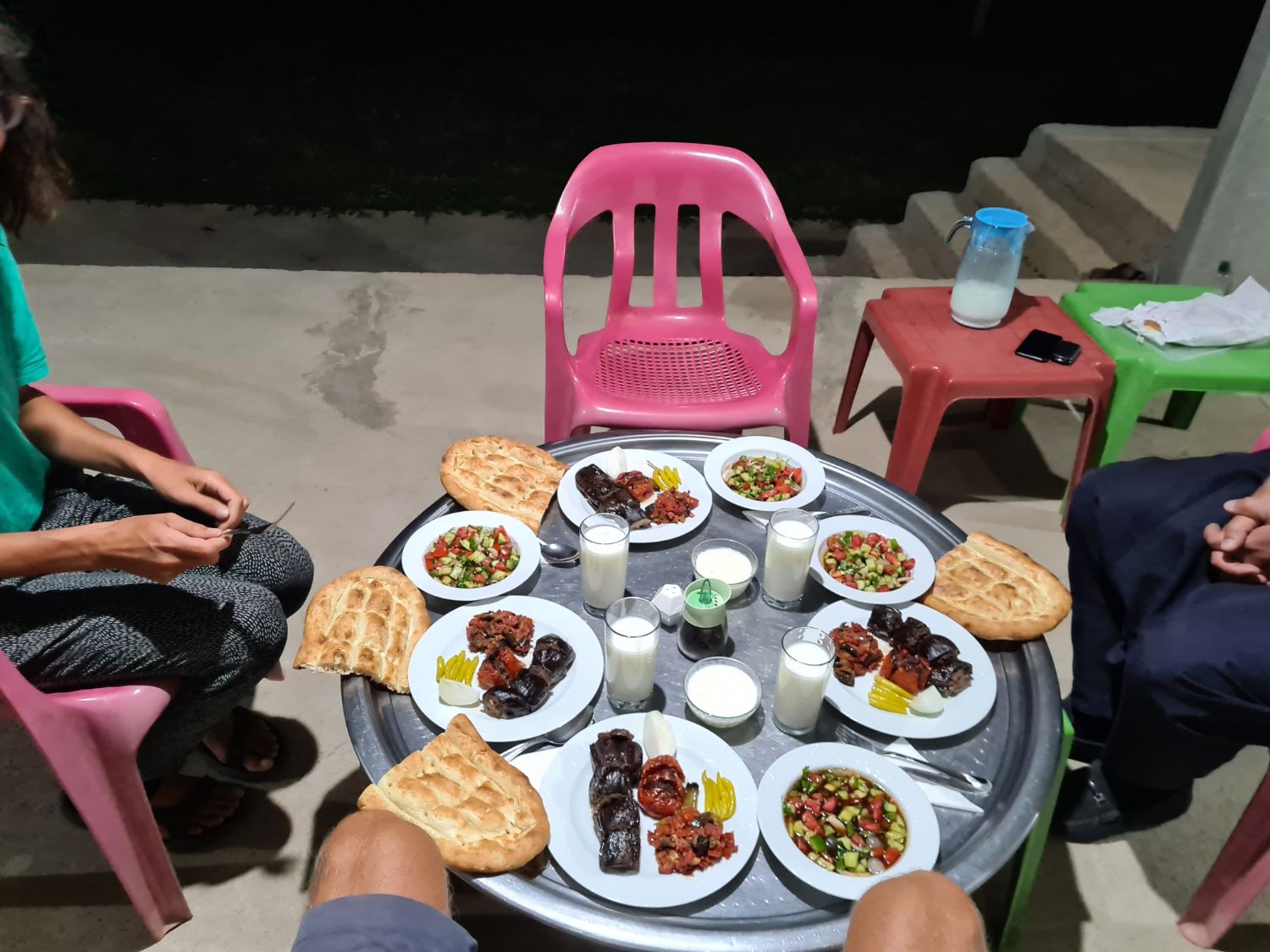 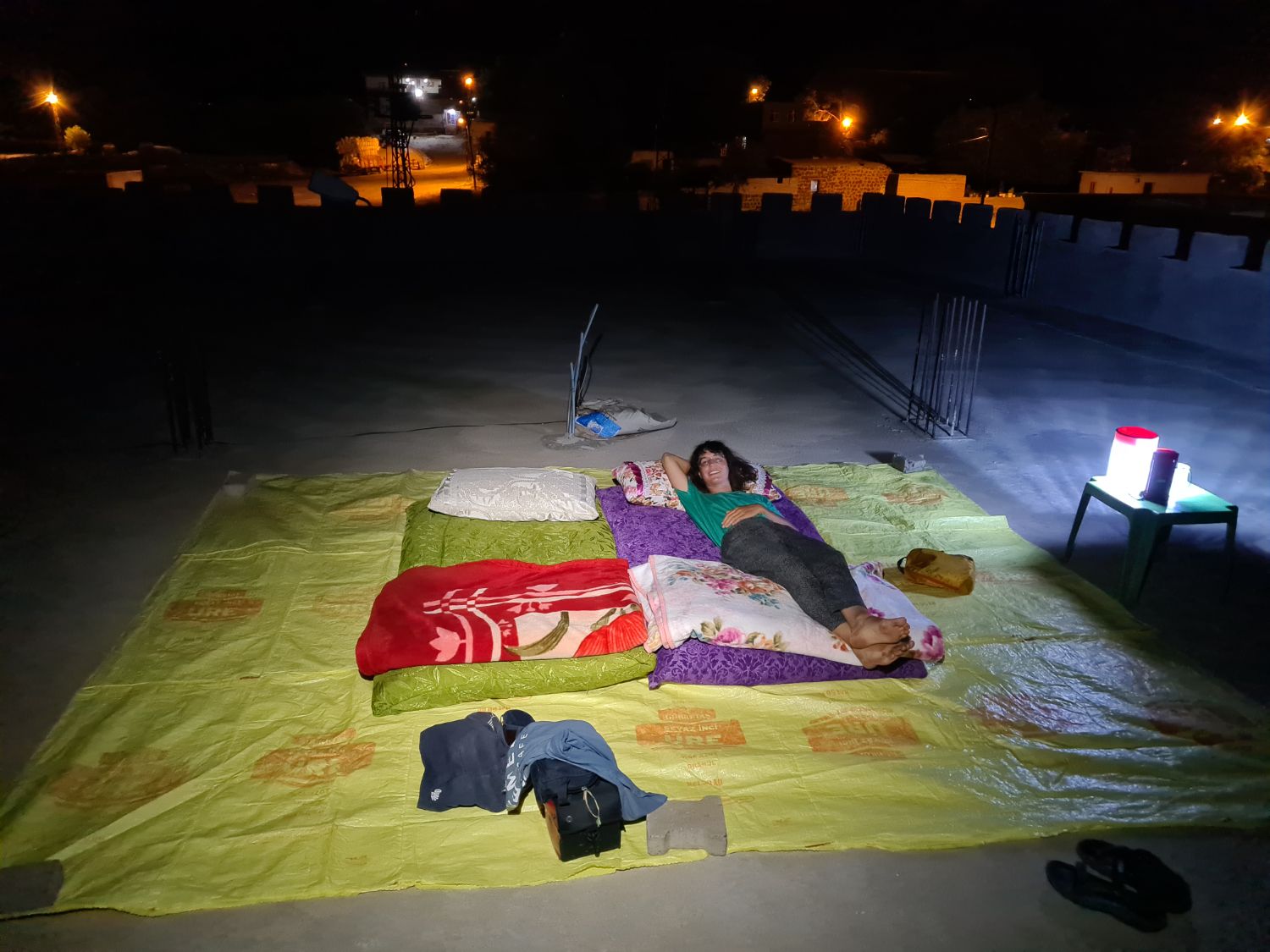 Sleeping on the roof under the stars

Our plan for a long time was to cycle to Iran through Iraqi Kurdistan. An autonomous region in the north of Iraq which has been relatively safe and stable in the last couple of years. We knew some people who cycled there not long before and they were quite excited about it. Again with stories of great hospitality, Kurdish traditions and beautiful, historic places to visit.

Unfortunately, a week before we were going to cross the border, a holiday resort was attacked and 10 Iraqi tourists died. This horrible attack, combined with some news of retaliation attacks in the same region, and forecasts of 45 degrees for the next weeks, made us decide to shelve this plan.

We decided, to much relief of our parents, to go where most cyclists go: Georgia and Armenia. But, since we have to be in Iran in the beginning of October the latest, we needed to take another bus, to the north. This gave us a chance to explore one more region in Turkey. Again mountainous, of course, but almost 20 degrees colder and a lot greener. 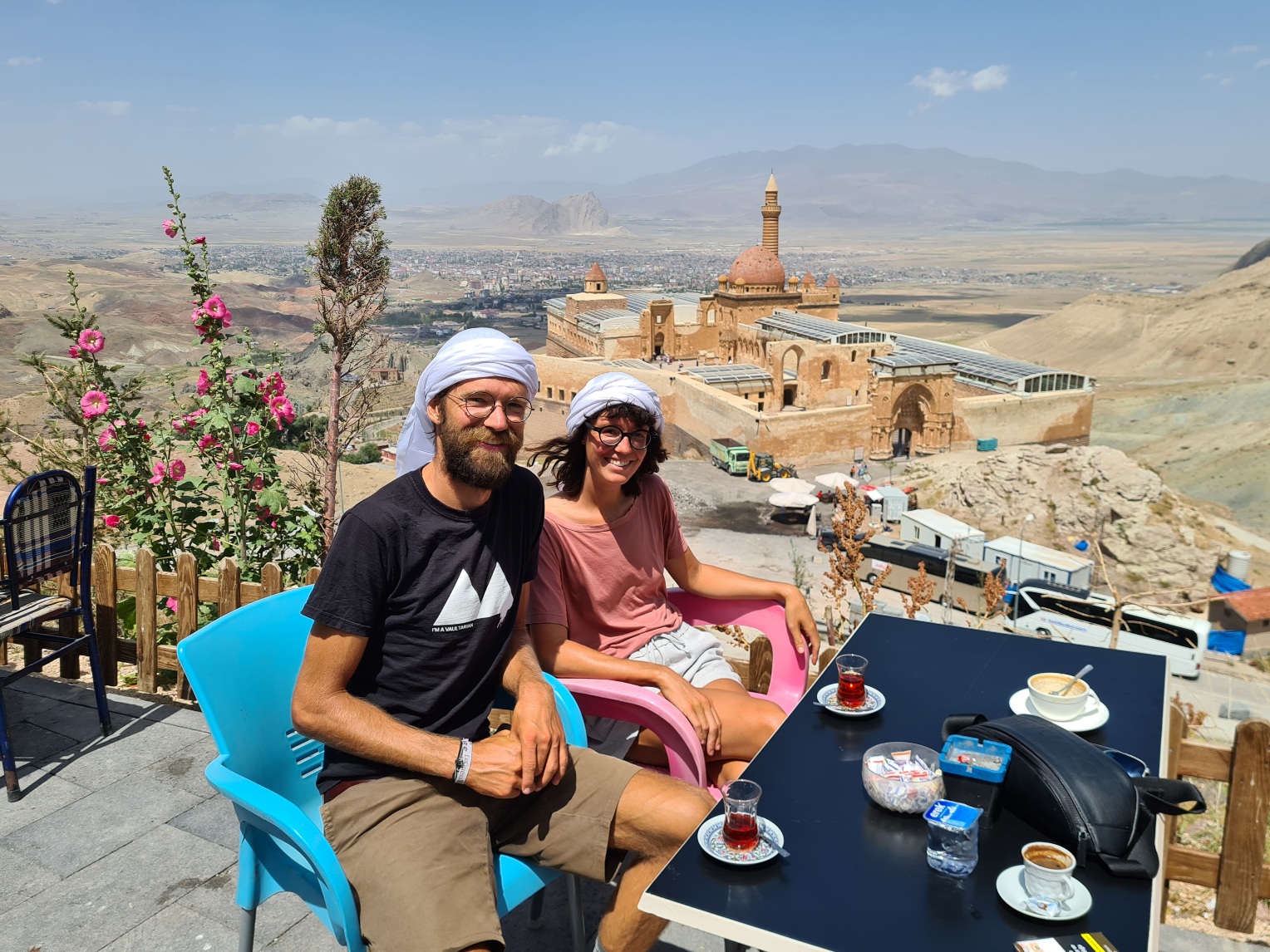 Having tea above Ishak Pasha Saray 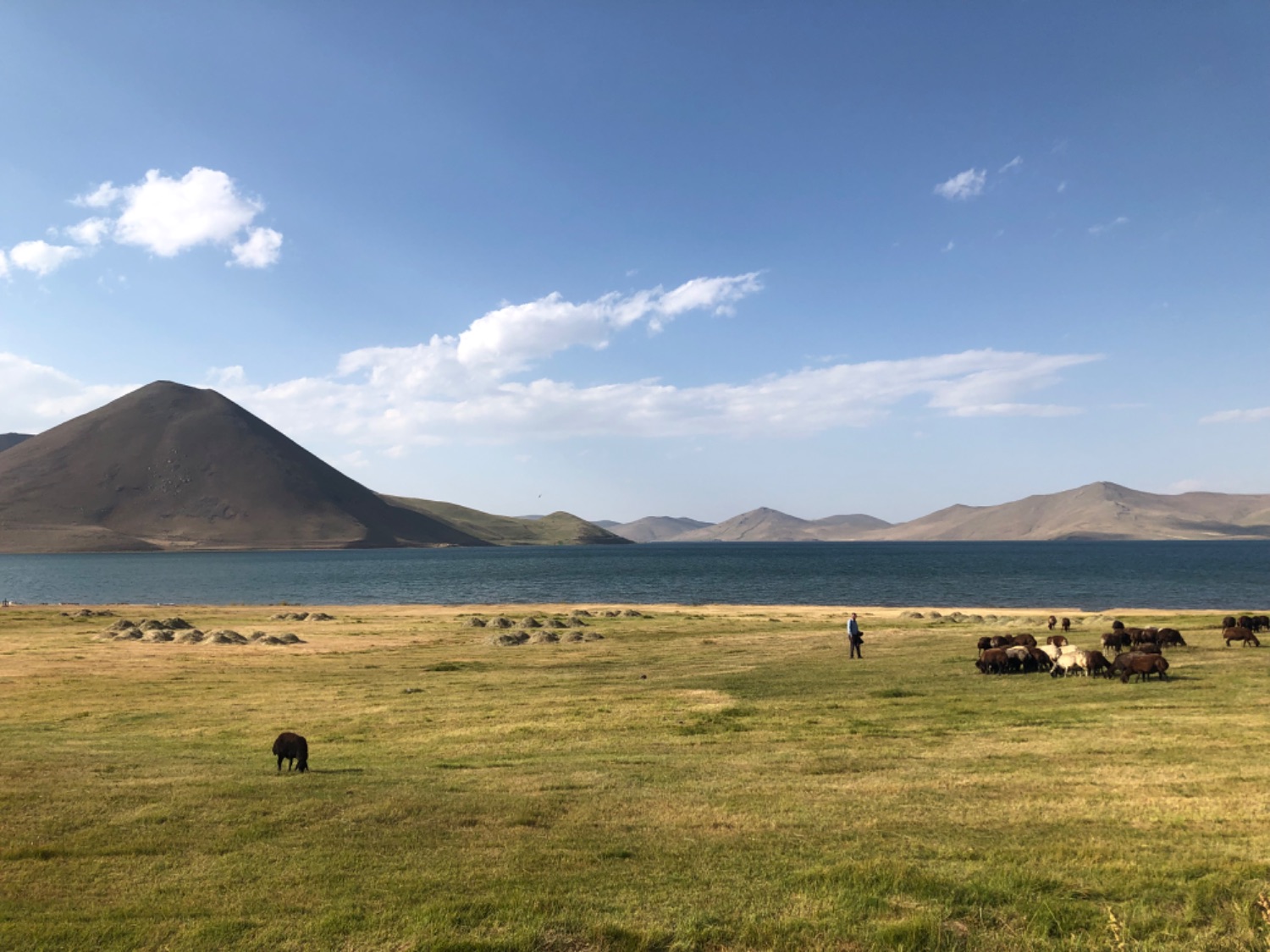 It took us a week to cycle the last 600 kms in Turkey before we crossed the border to Georgia. We swam in a few lakes and had to take out our rain jacket again! But, a few Turkish constants remained: çay and misafirperverlik, tea and hospitality. We only slept in our tent once between Doğubayazıt and the border. 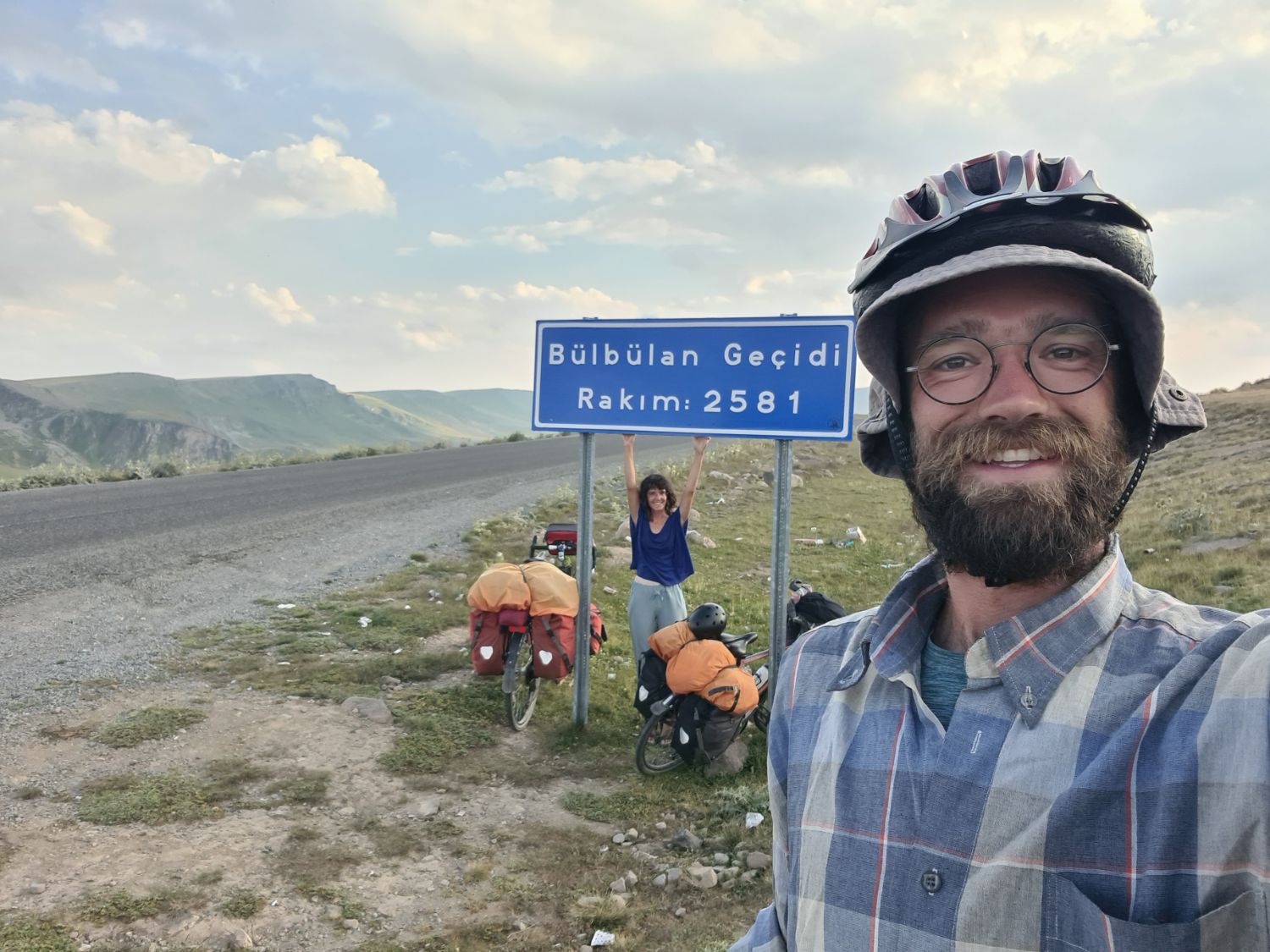 Looking tired after climbing to 2600 m

We spent an amazing and surprising two and a half months in Turkey. We cycled 3000 kilometers in the country and did 4250 km in total. 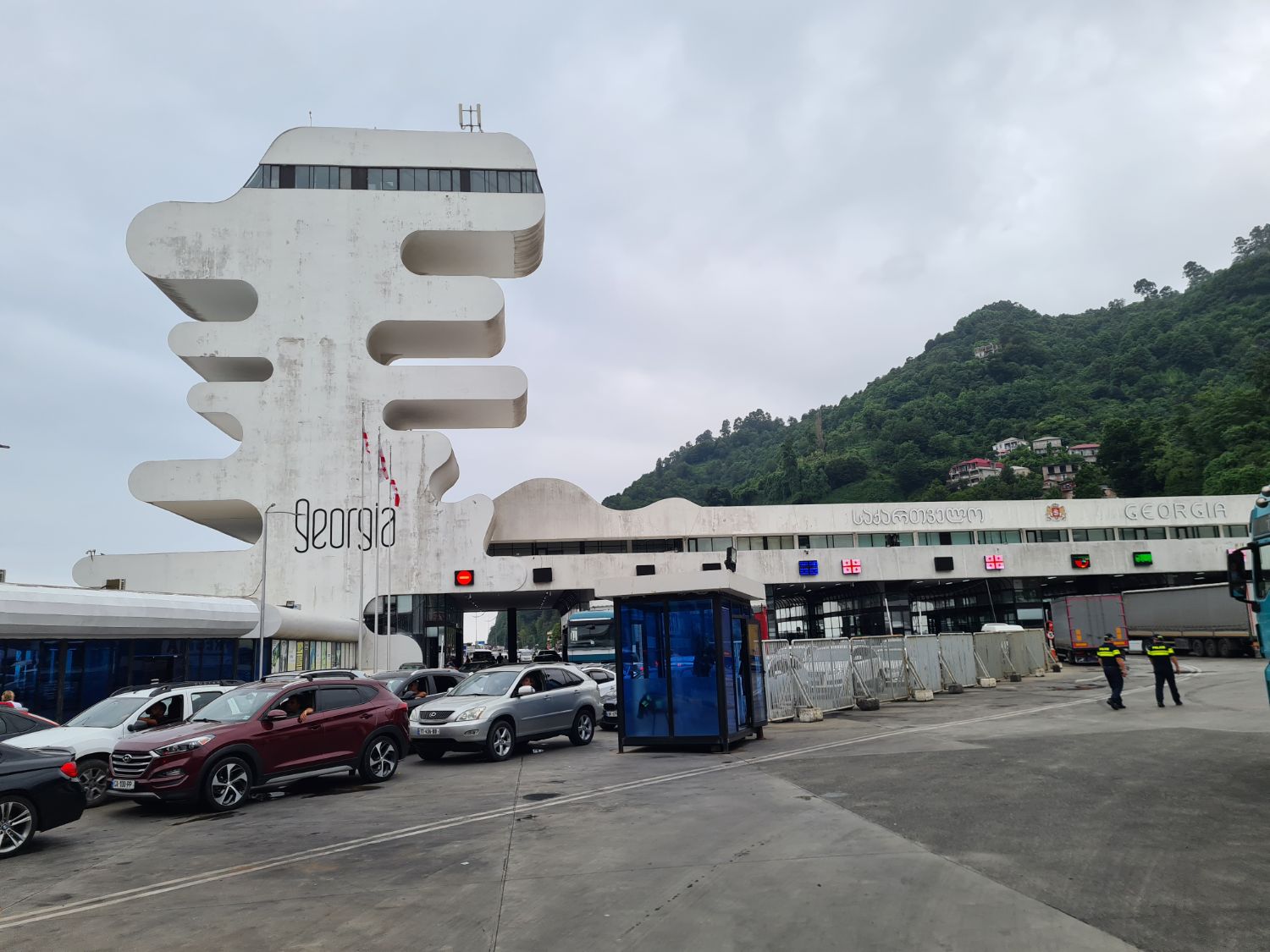 What follows now is Georgia and Armenia. We will have to adapt a bit to be in a new country with a completely different language, religion and culture after all of this. We are excited, though, and look forward to the milder weather and green mountains.

See you in the next one! 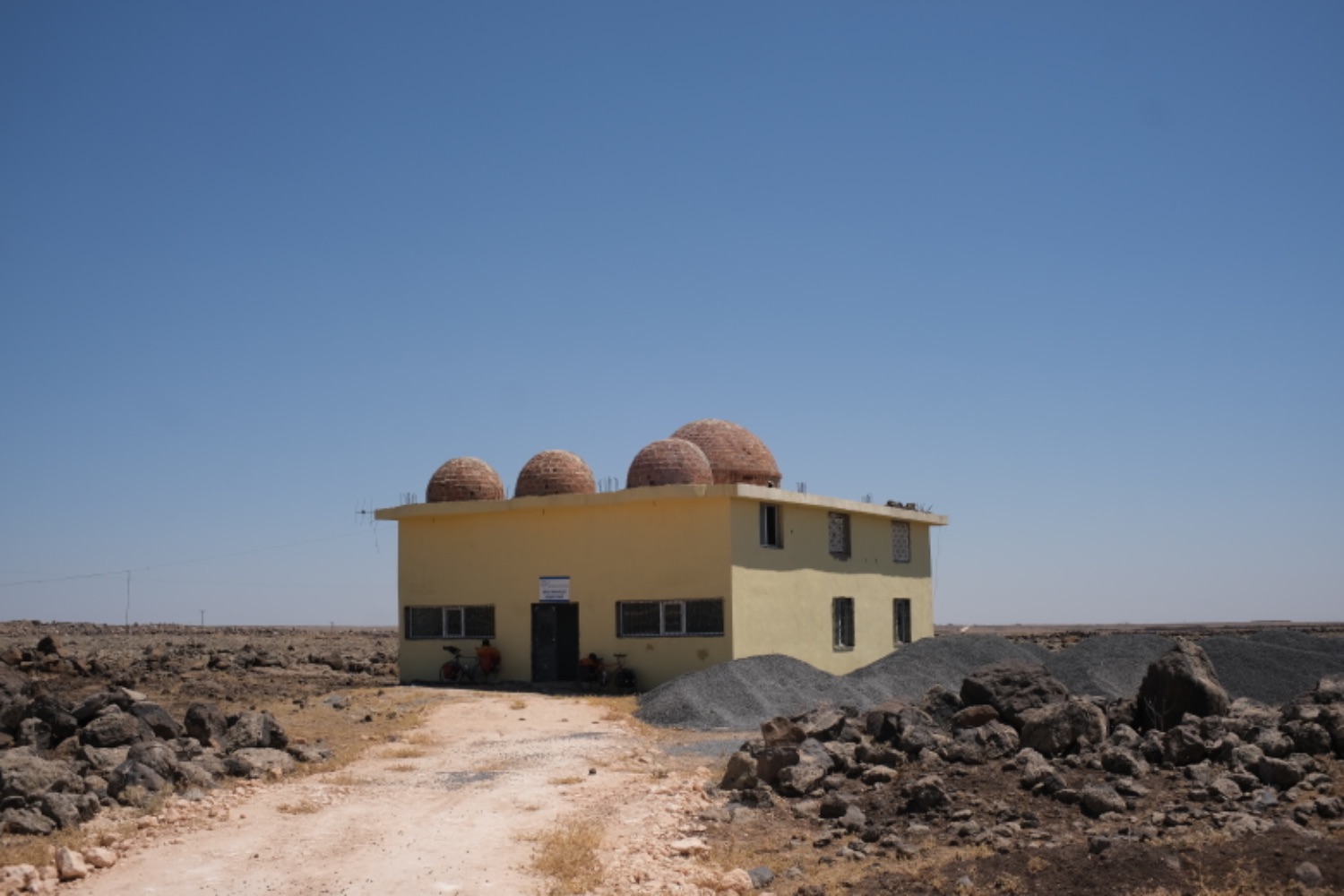 An unfinished mosque provides some much needed shade 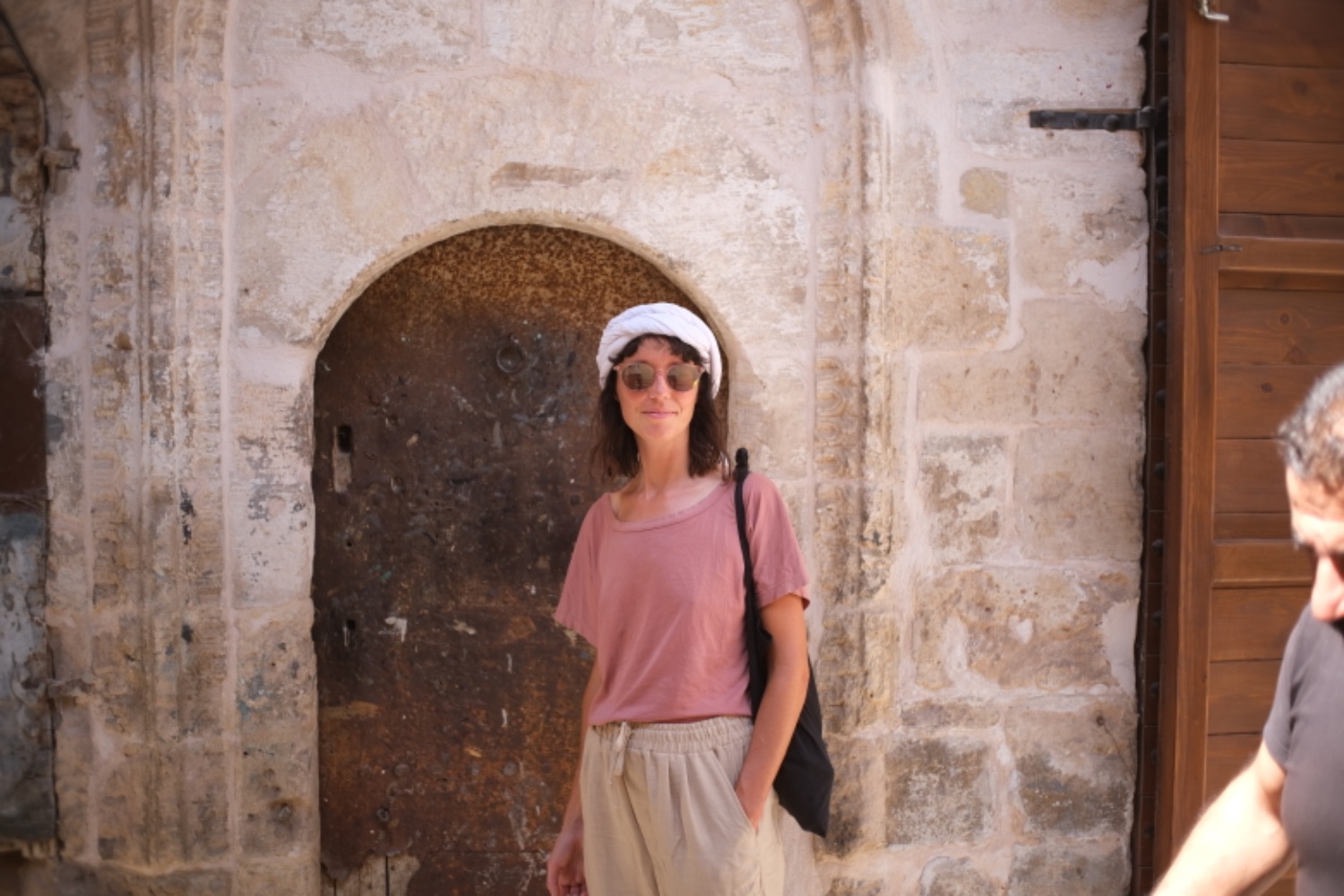 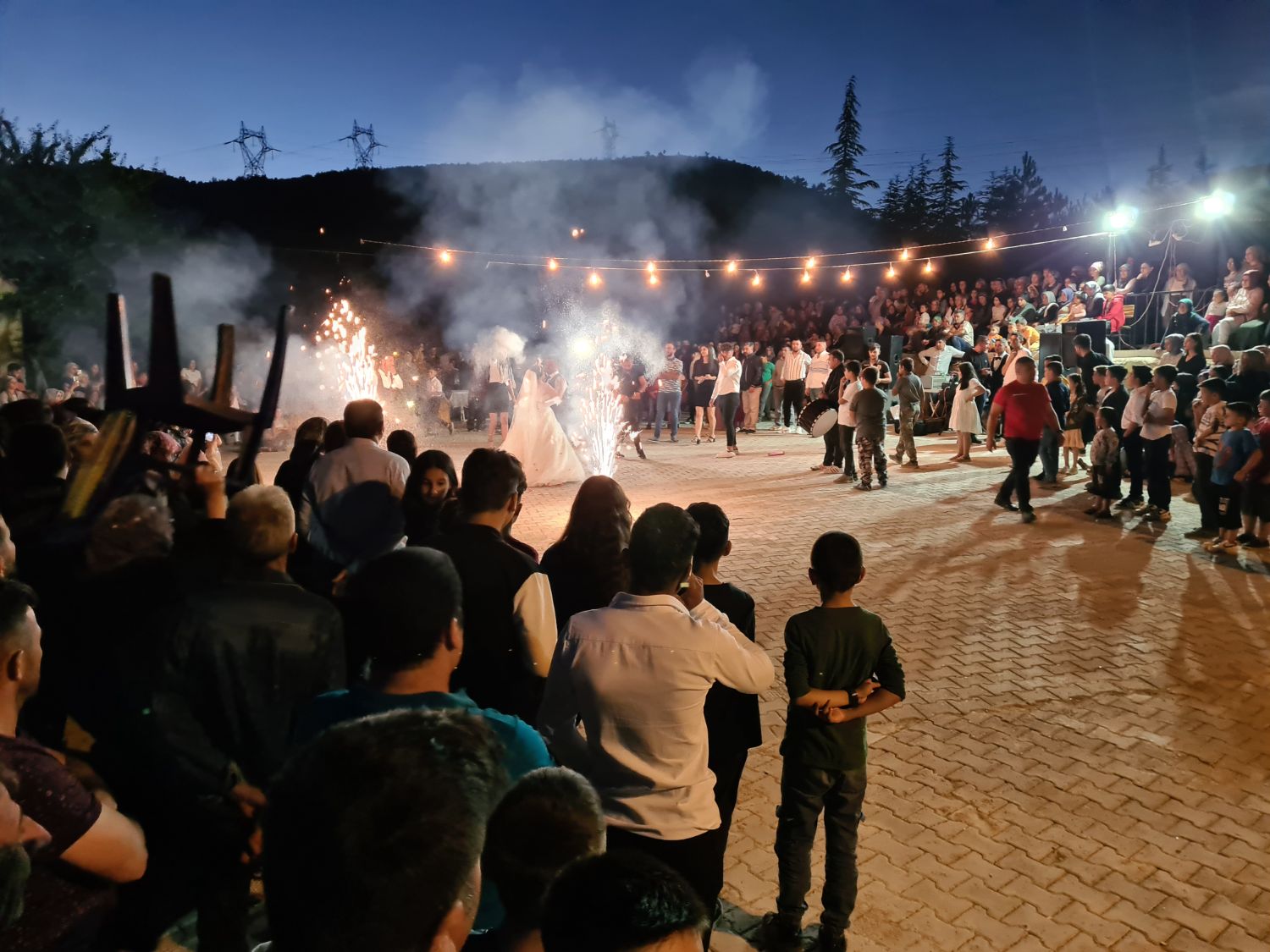 Everyone is welcome at a Turkish wedding 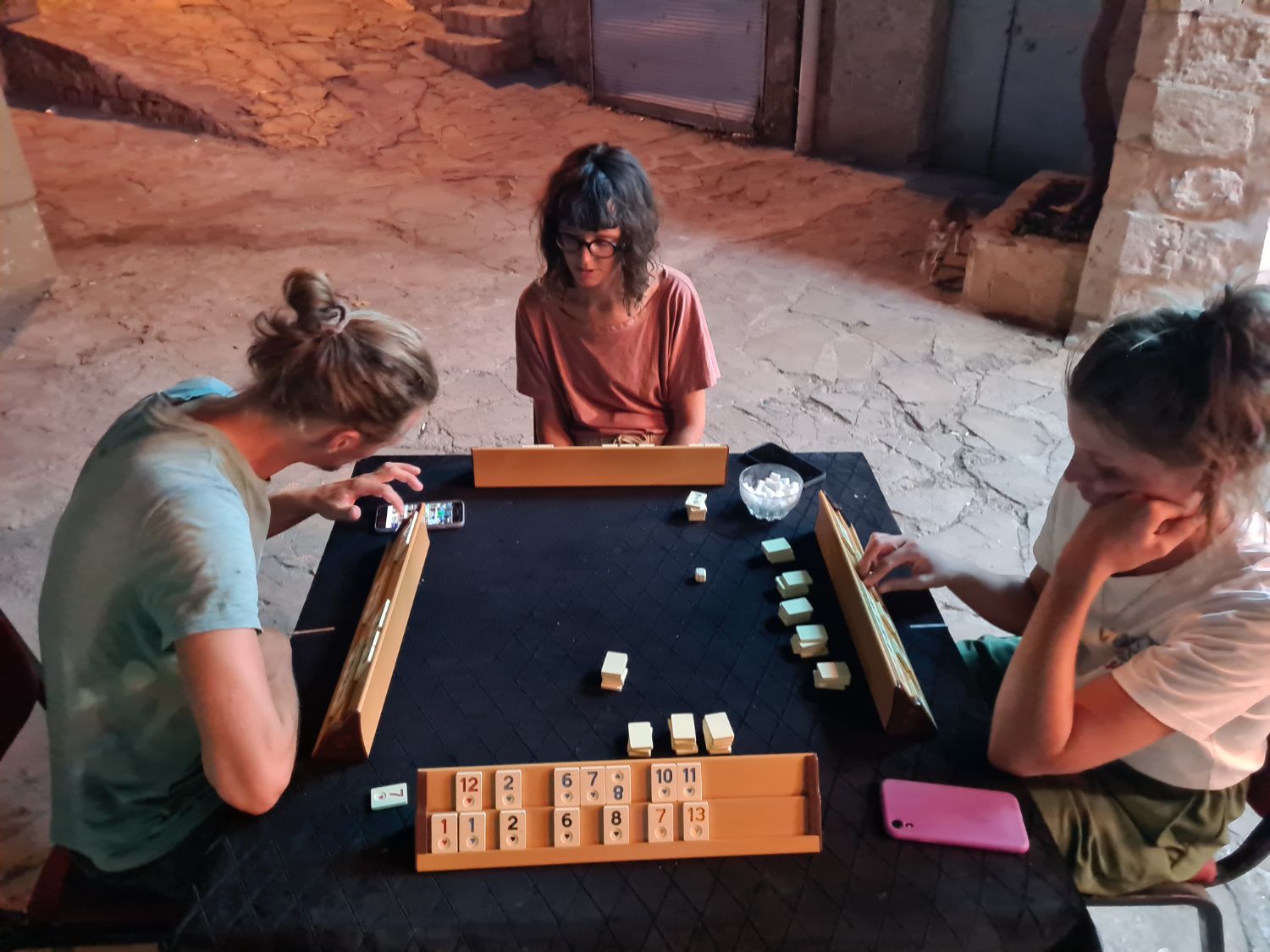 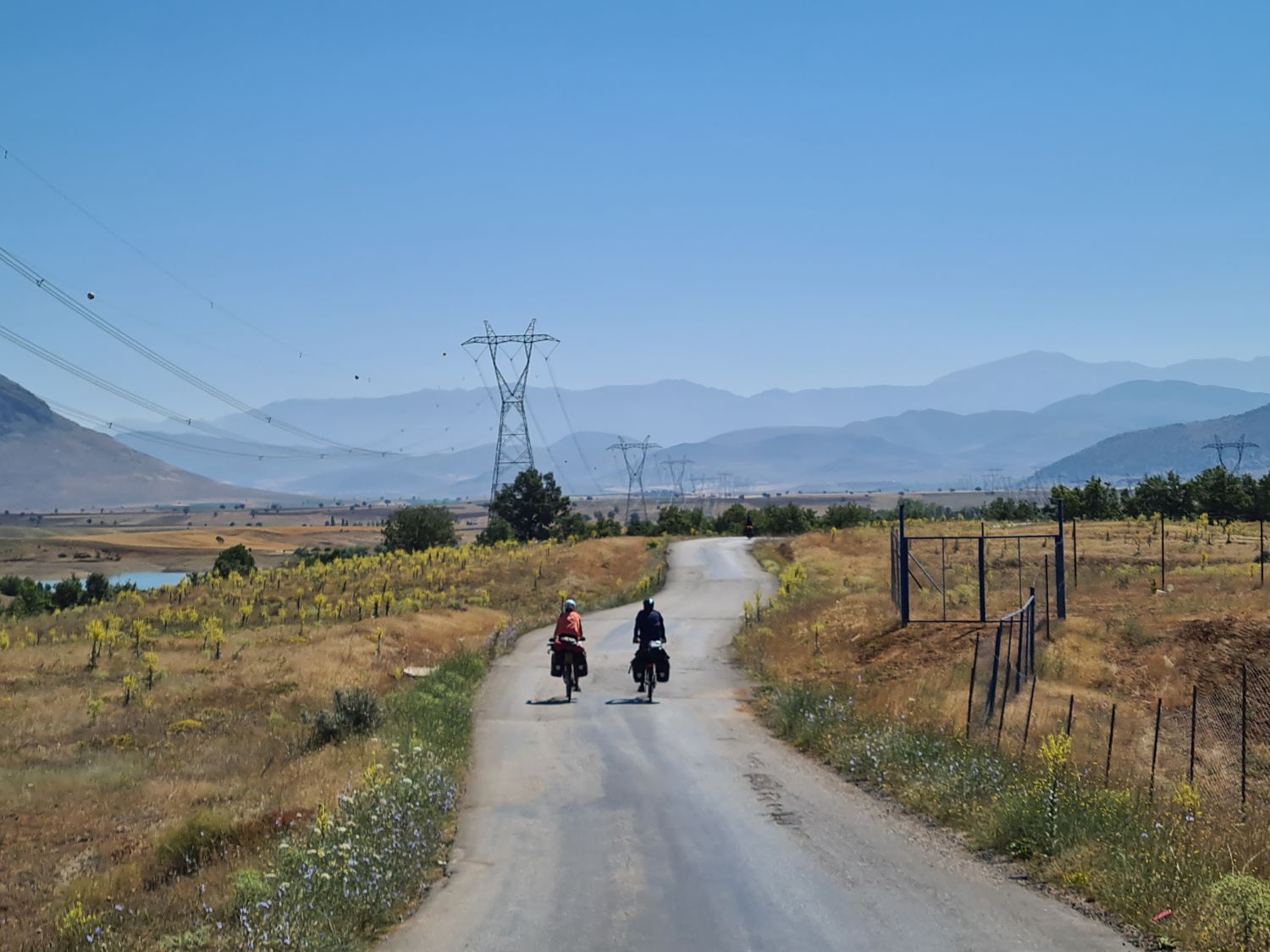 Cycling in Anatolia with Tom and Six 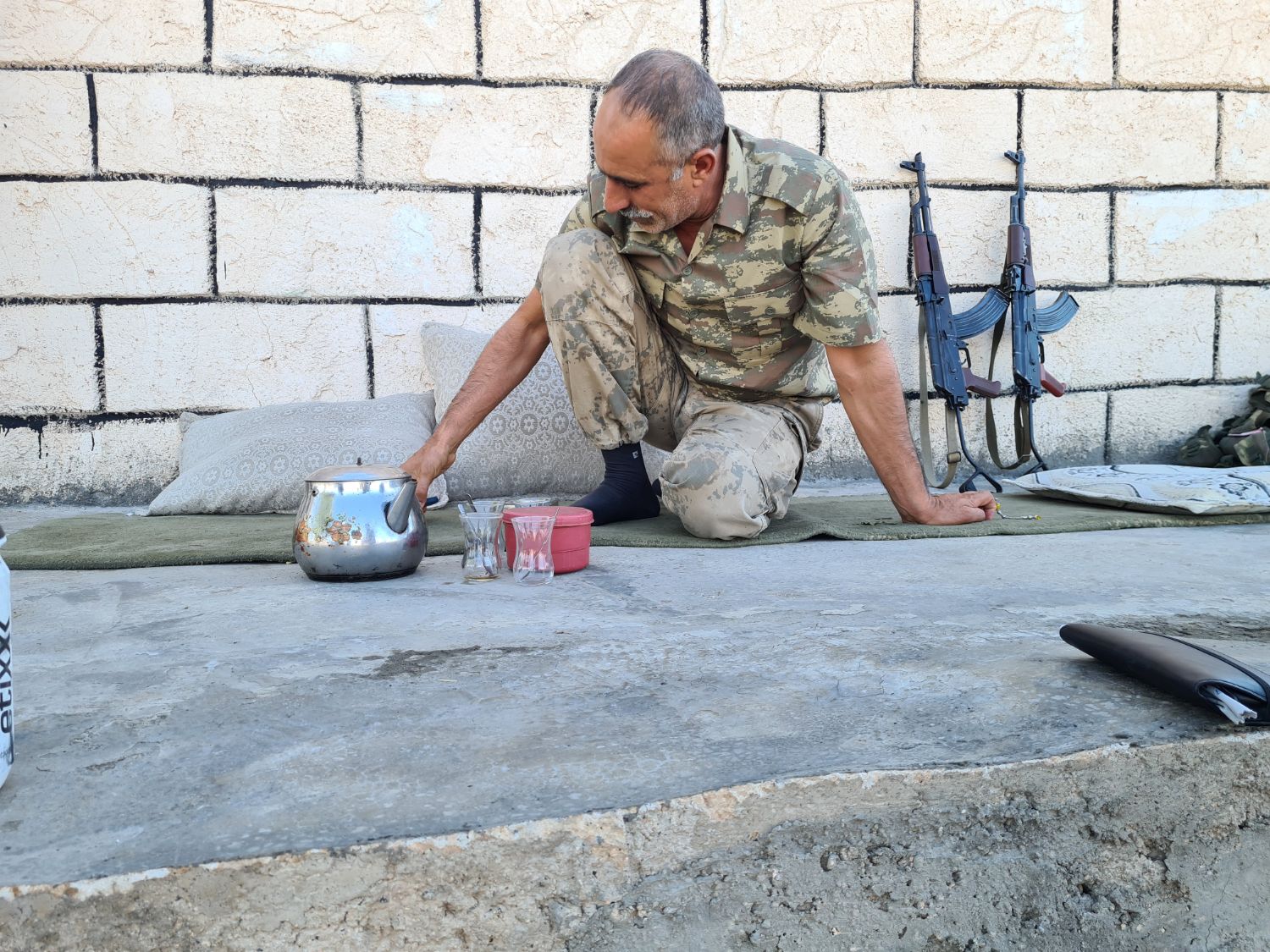 We even shared some tea with the jandarma 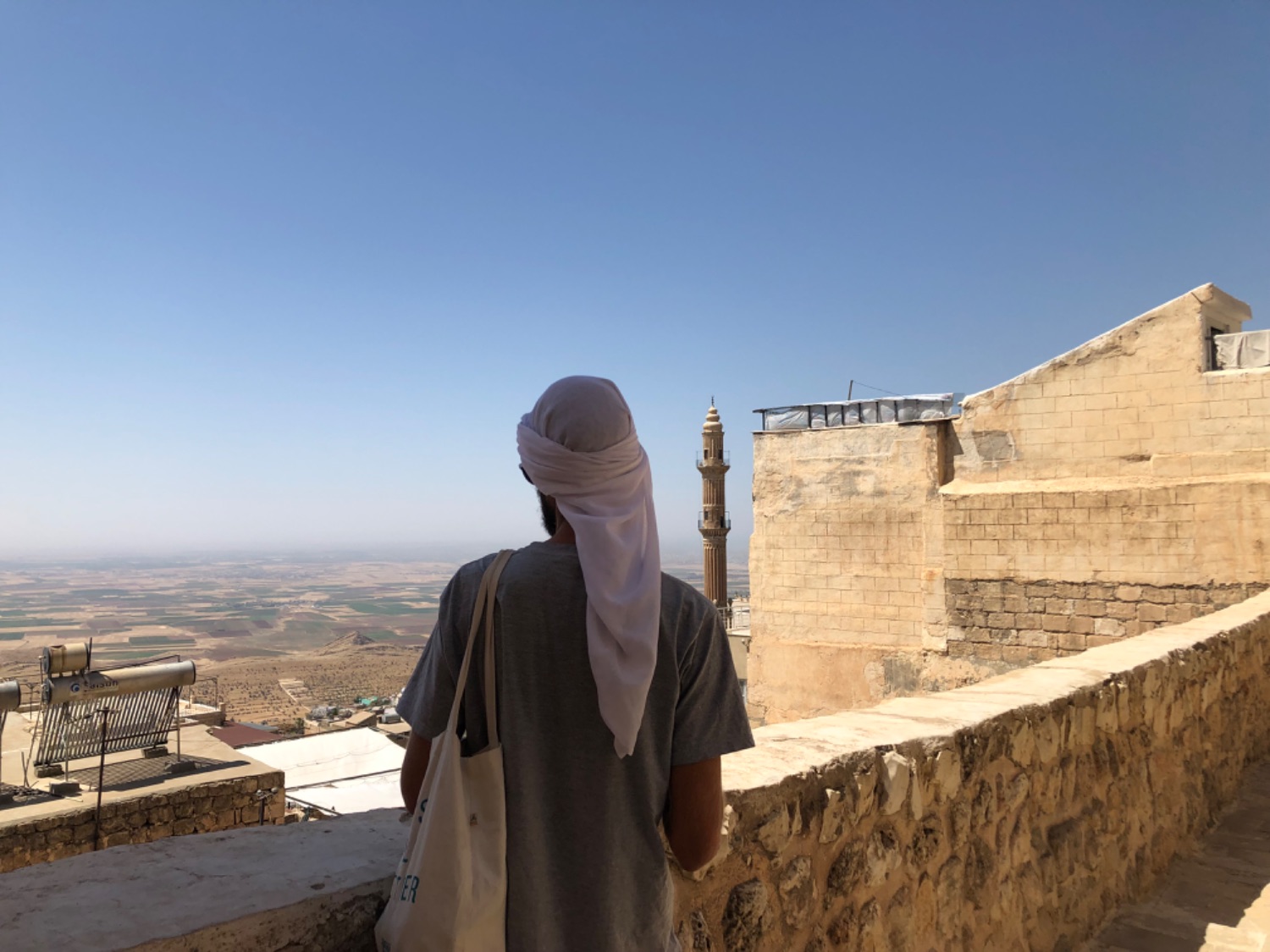 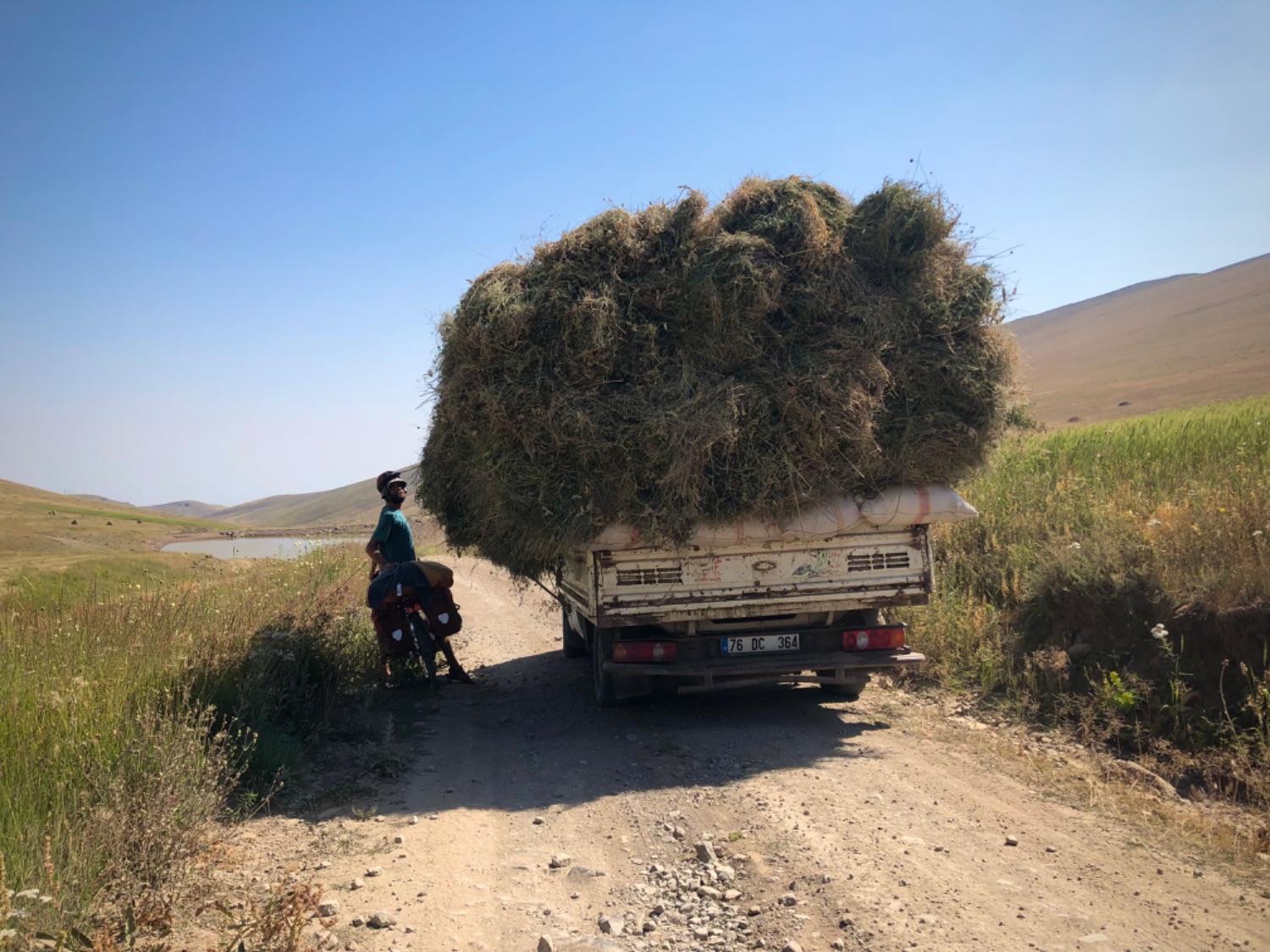 The dangers of the road