Up and down in Armenia 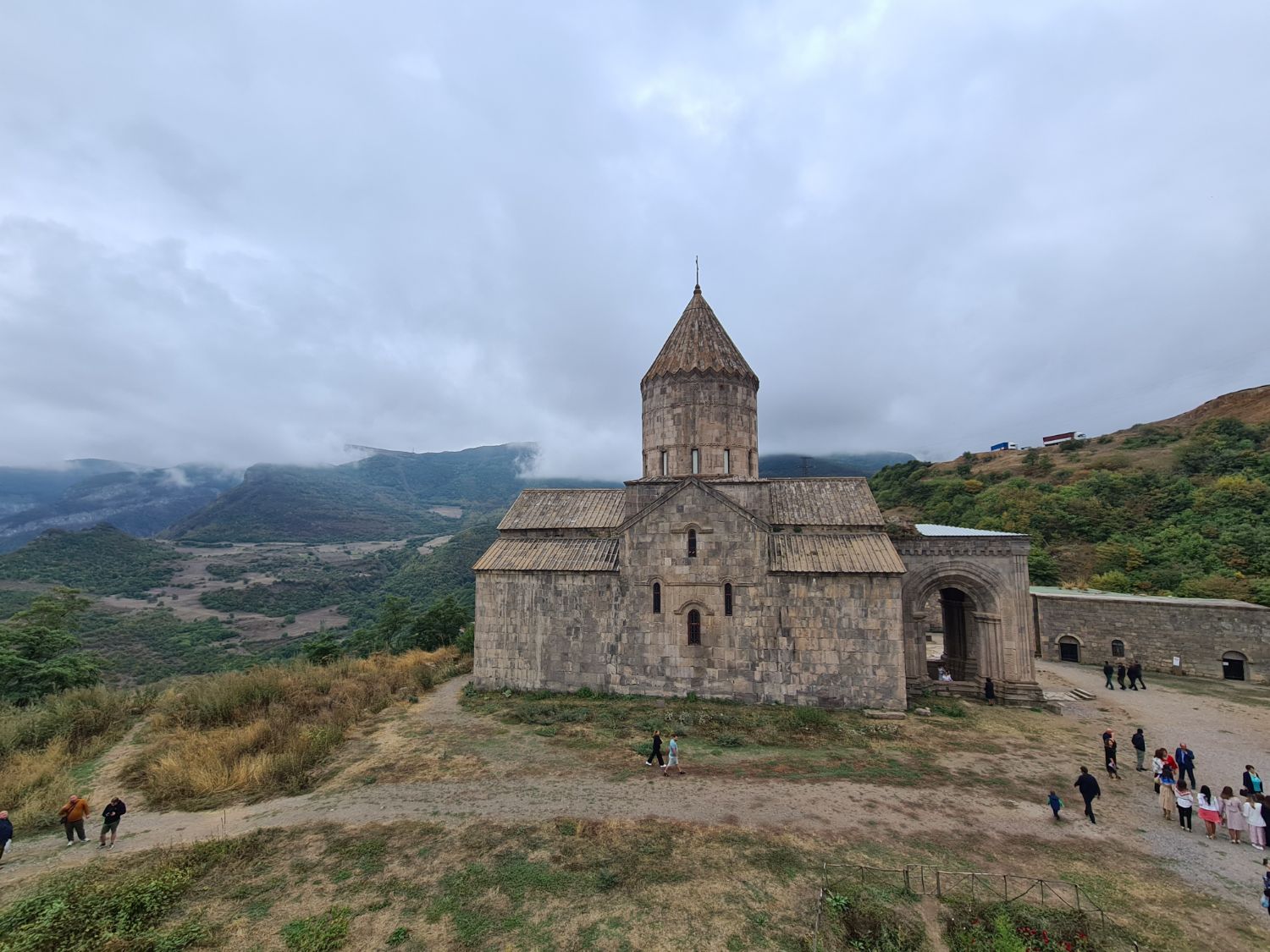 While we are taking a few, long overdue rest days here in the mountains in Italy, I can finally take the time to write about some of our more positive experiences of the trip again. We have more or less been on the move non-stop since we left Iran, and in the meantime we crossed Turkey by train, island-hopped through Greece and cycled for two weeks in Italy. More about our current plans at the end of the post, but first: Armenia. 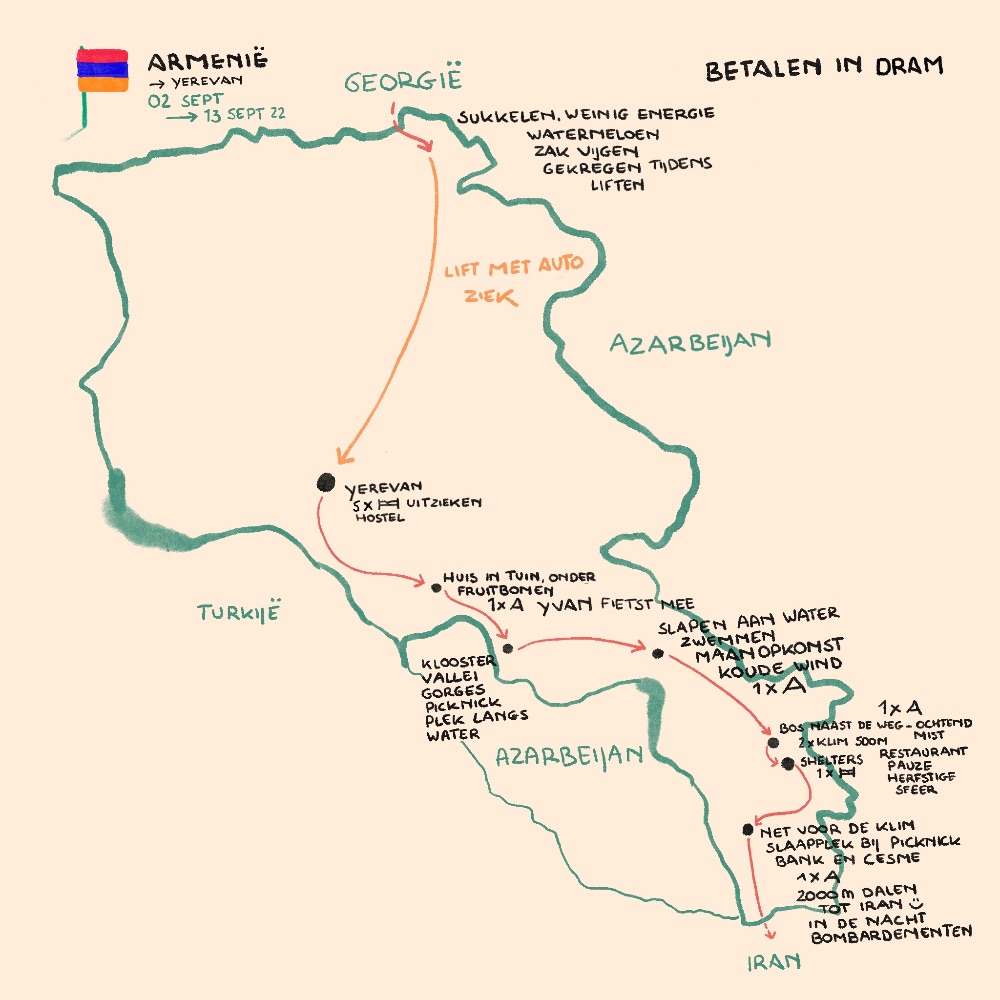 Our trip in Armenia

We need to go back almost two months: we left Tbilisi for Armenia on 2 September thinking we were feeling better again. Unfortunately, the next day, when we crossed the border to Armenia, we had absolutely no energy after cycling only 20 km and decided to hitchhike to Yerevan instead so we could recover a few more days. We stayed in a regular old hostel and didn’t see much of the city unfortunately. 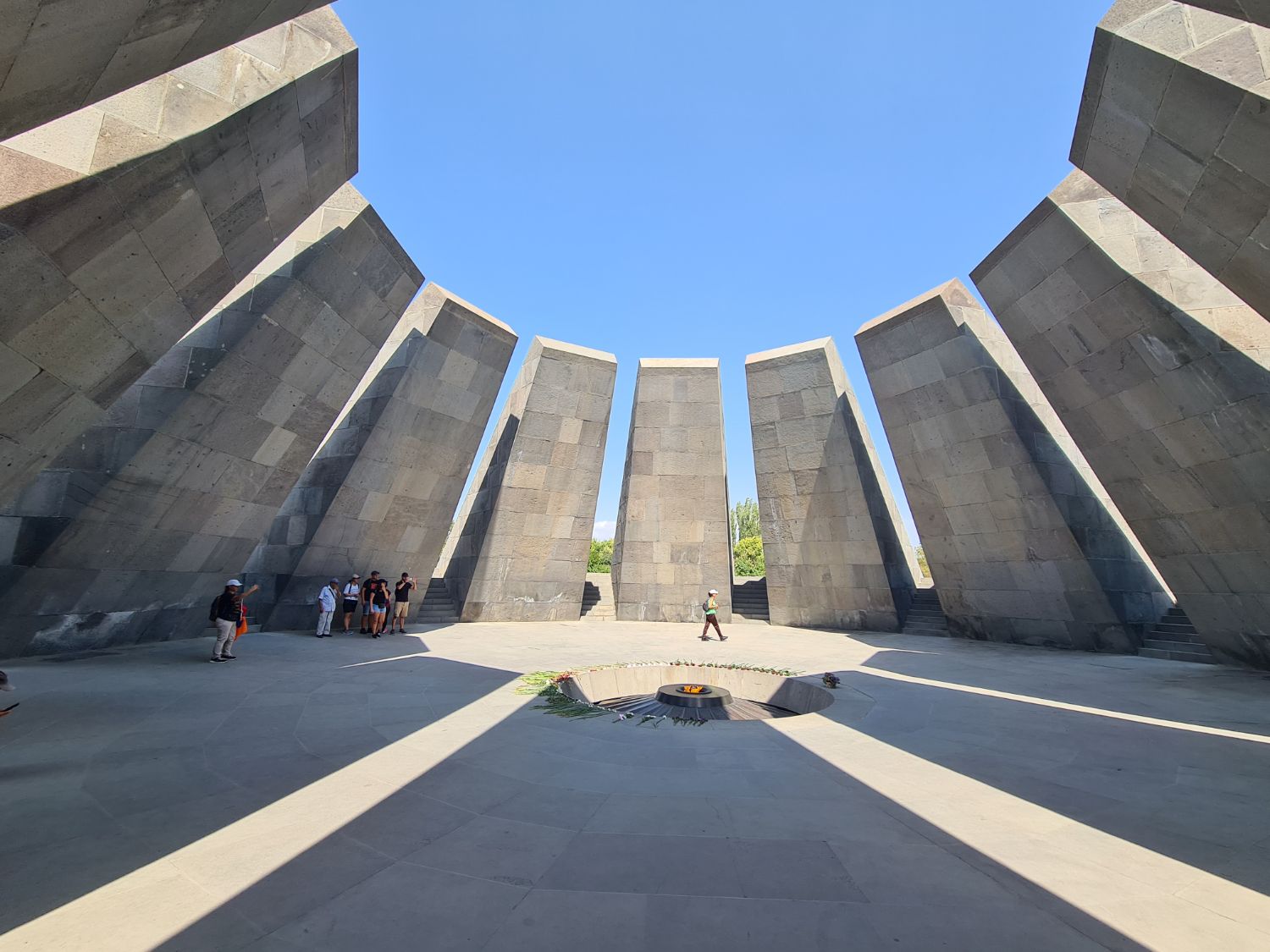 When we finally regained the energy and “goesting” (sorry, there’s no good translation for this) to cycle again, we left Yerevan. It took almost a week because we wanted to make sure we wouldn’t have to stop again, but we were definitely longing to sleep in our tent again after five nights in a stuffy and “expensive” hostel bed. More importantly, we were eager to get to Iran!

Armenia was a land of ups and downs, sometimes quite literally. We gained almost 8000 meters in only 7 days and around 420 km. We also had temperatures ranging from 35°C to 5°C and we just about avoided being caught in the conflict that was flaring up between Armenia and Azarbaijan. The people were very friendly and the scenery was amazing! We were enjoying cycling in Armenia. 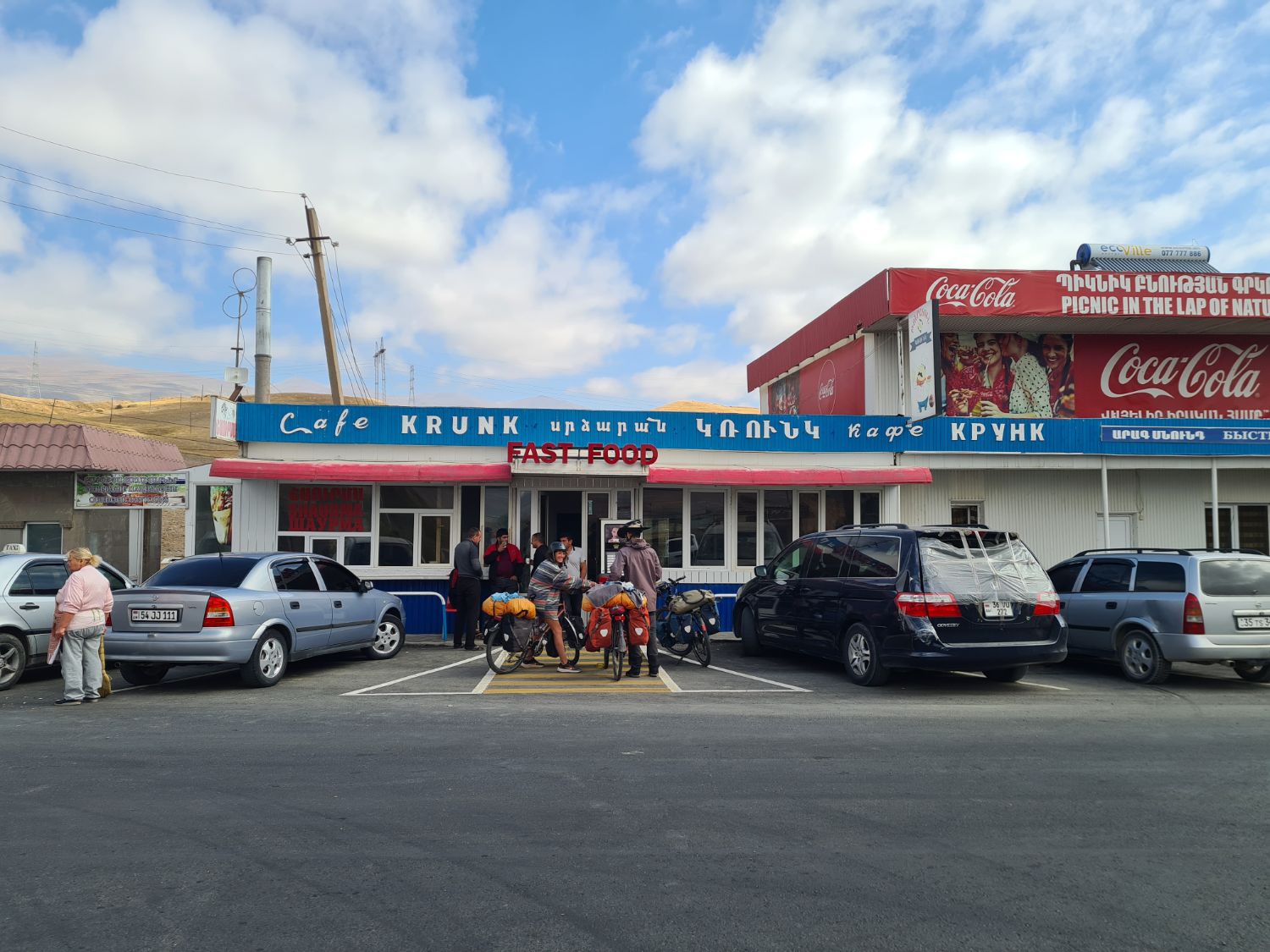 A rest stop with Soviet vibes

From Yerevan the road to Iran is quite straightforward, and luckily, the best part of the first day was still flat so we could warm up the legs after almost two weeks of rest. At the end of the day we arrived in a small village where we met up with Ivan, a Canadian Frenchman we met in Yerevan. We asked at the first house if we could camp somewhere and were promptly invited to camp in their apple orchard and were offered some tea and cookies. 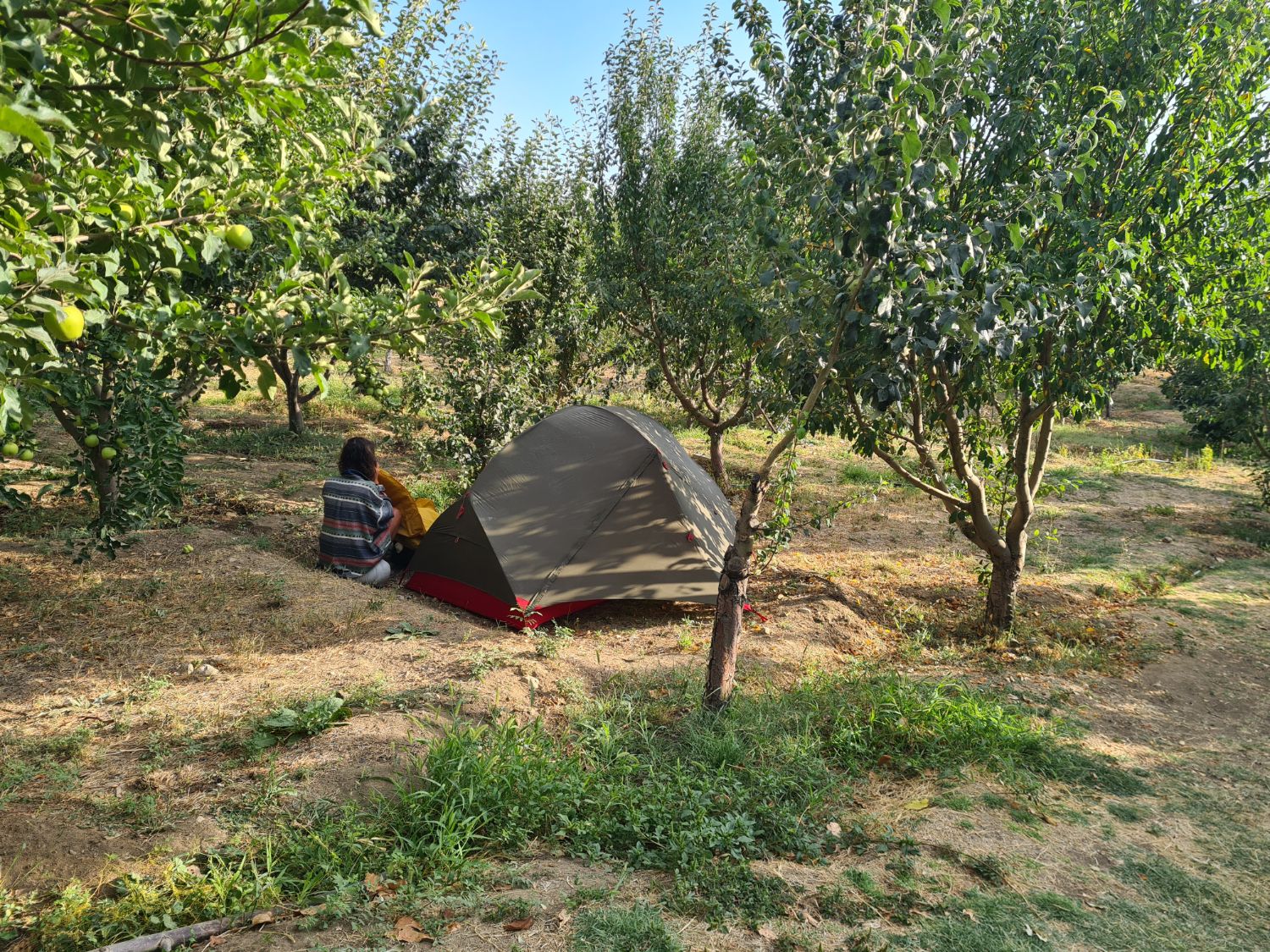 Camping in an orchard 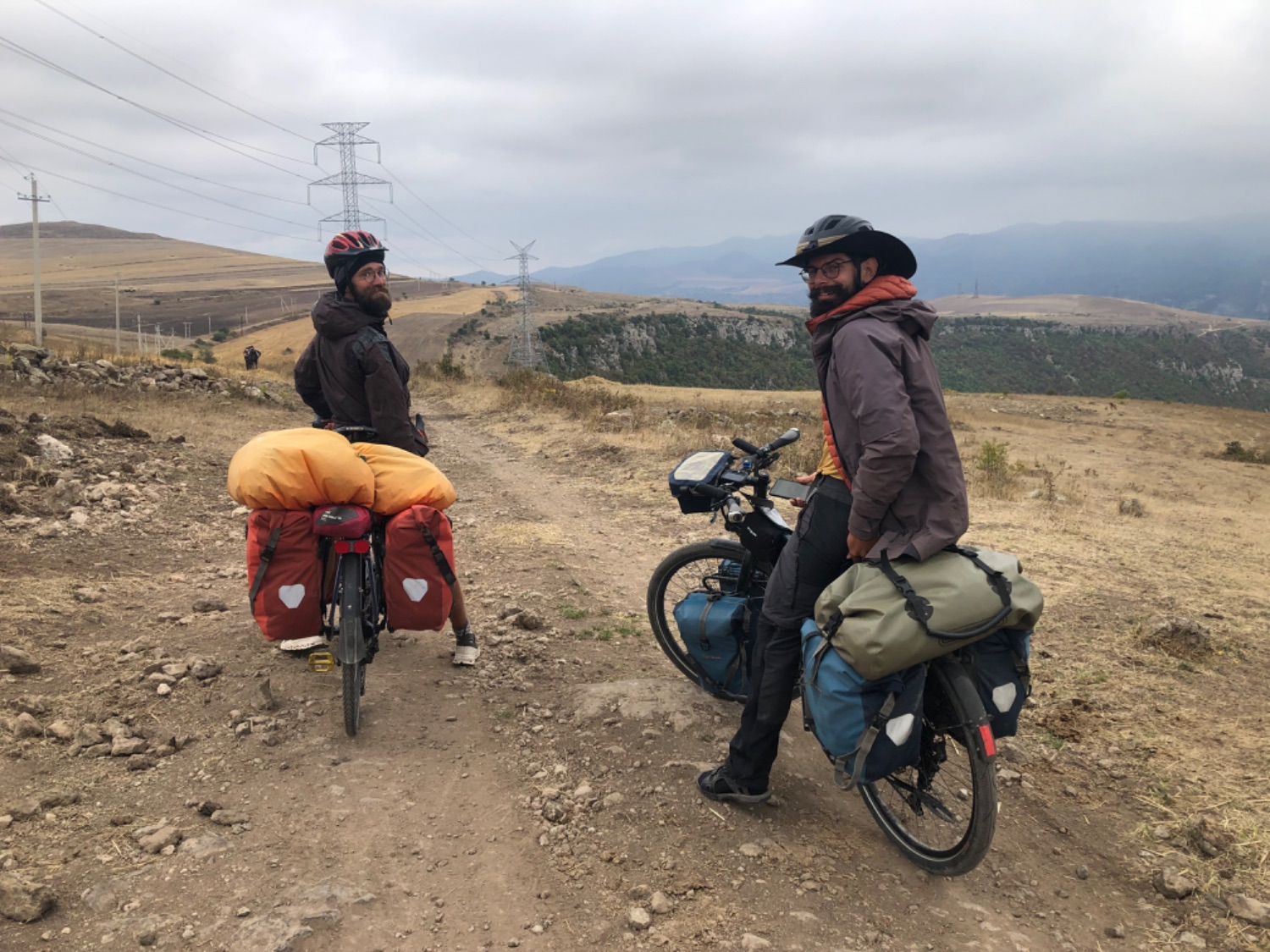 Ivan and I just before Tatev

After that first day we continued with Ivan and climbed several mountain passes, visited a few remote monasteries and found really nice camp spots on our way south. Around the Tatev the weather changed quite a bit. It got wet and foggy and the temperatures dropped. We even had to take out our winter jackets and gloves. By the time we descended to the border we were (shortly) in T-shirt and shorts again. 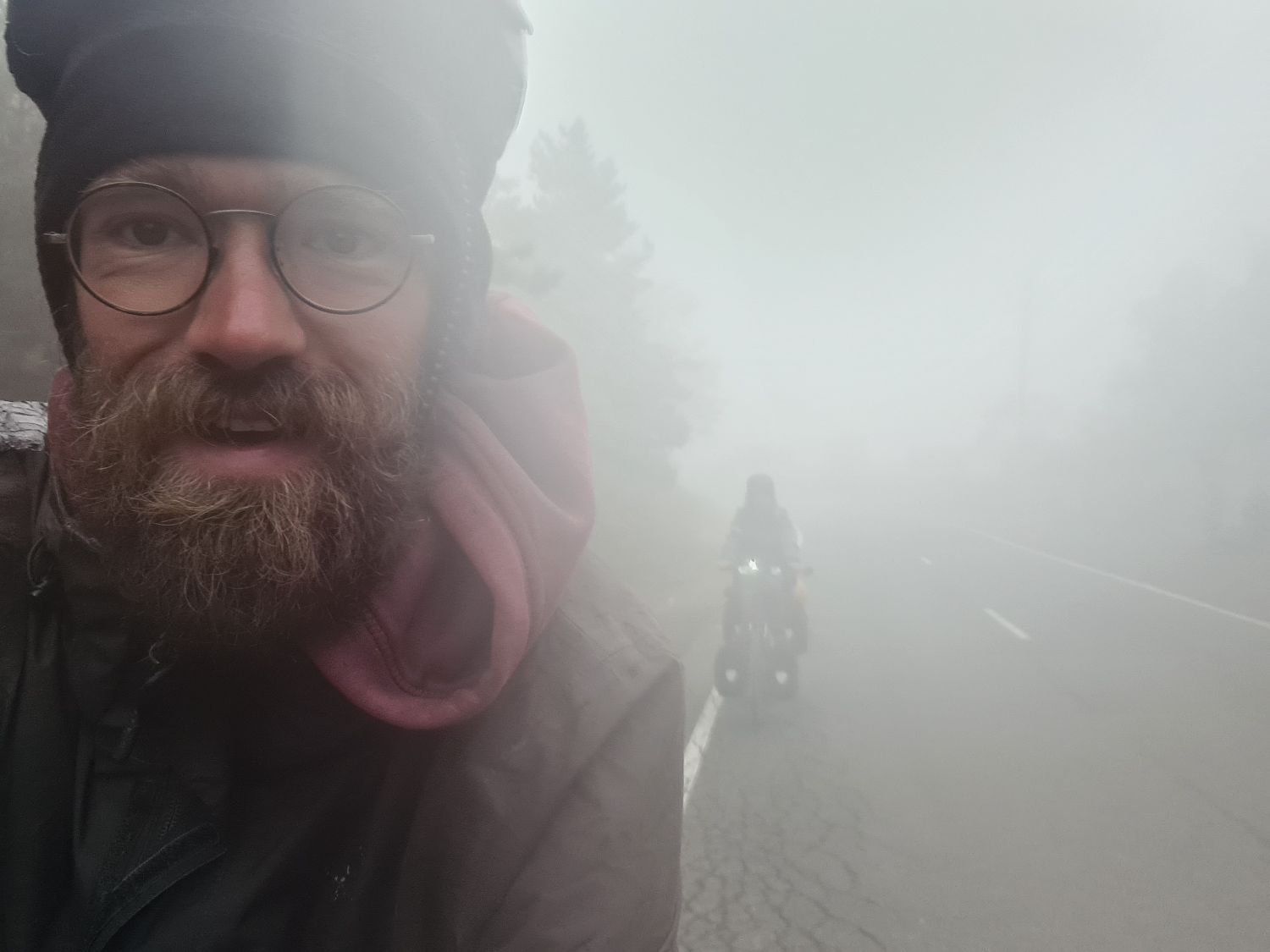 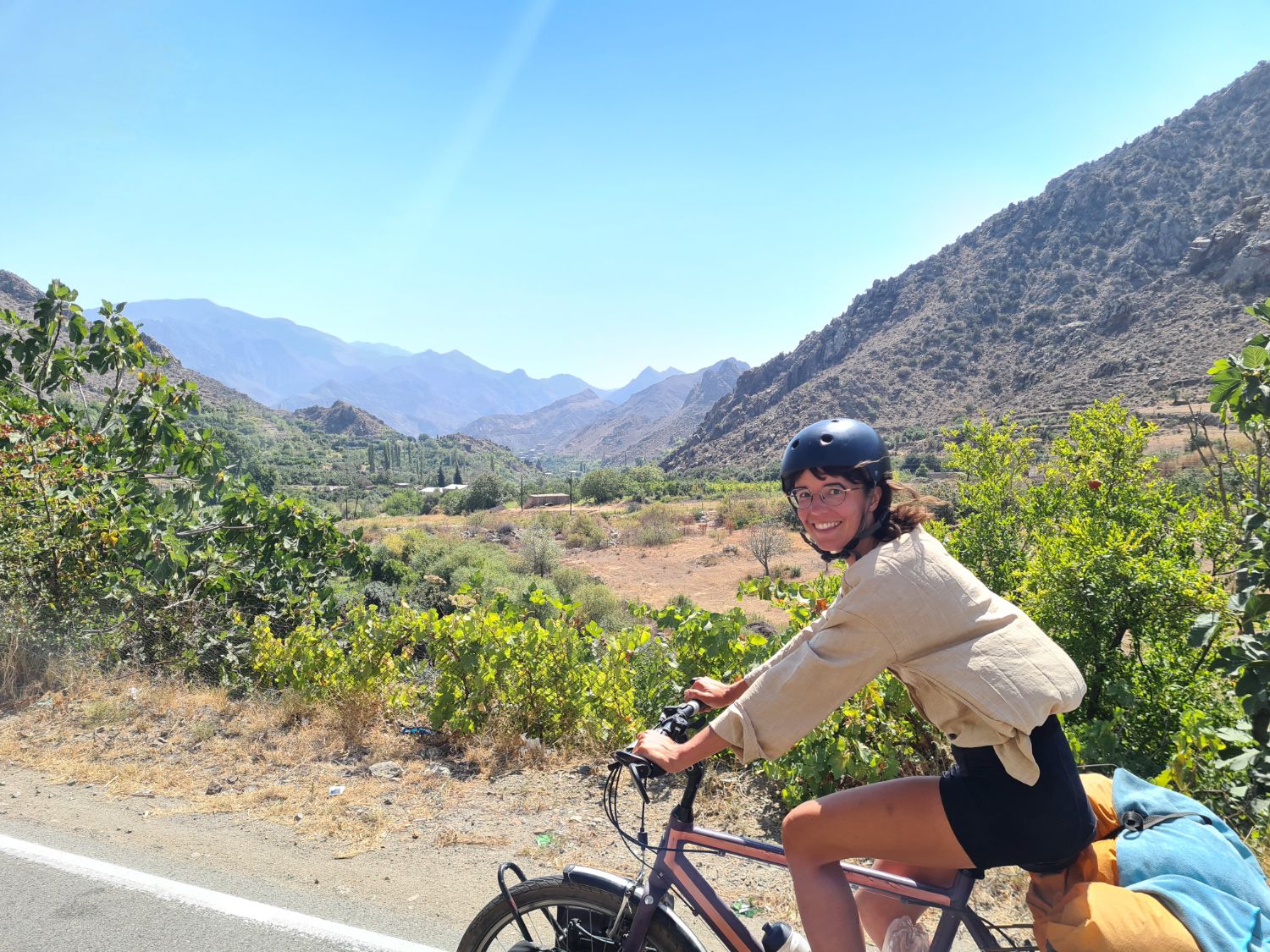 The last few kilometres in shorts before Iran

On our last day one more mountain pass up to 2500 meter separated us from the border with Iran. During breakfast Ivan already told us he’d heard from a friend that the conflict with Azarbaijan had flared up during the night but it was quite confronting when a road worked stopped us and showed “the war has stared, be careful” on his translate app. 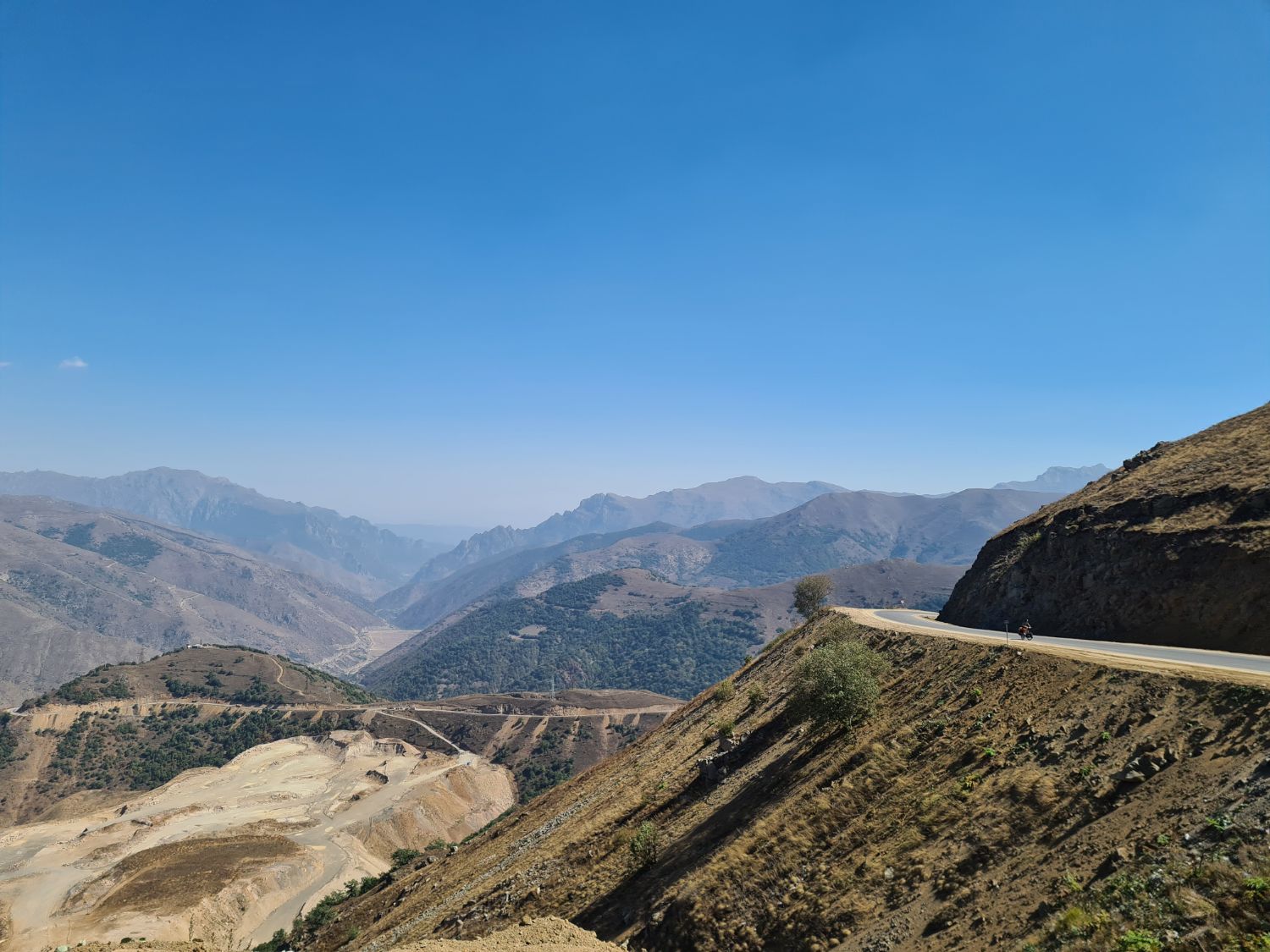 Fortunately, we were far enough away from where this was happening, but at the border we met a couple of other cyclists who were a lot closer and were woken up at night by the explosions. They took a taxi early in the morning to get to the border and leave Armenia as quickly as possible. Today, it looks like the conflict luckily didn’t escalate further than that, but I am guessing it is still quite tense there.

And then we finally crossed into Iran. What happened from there you can read in the previous post 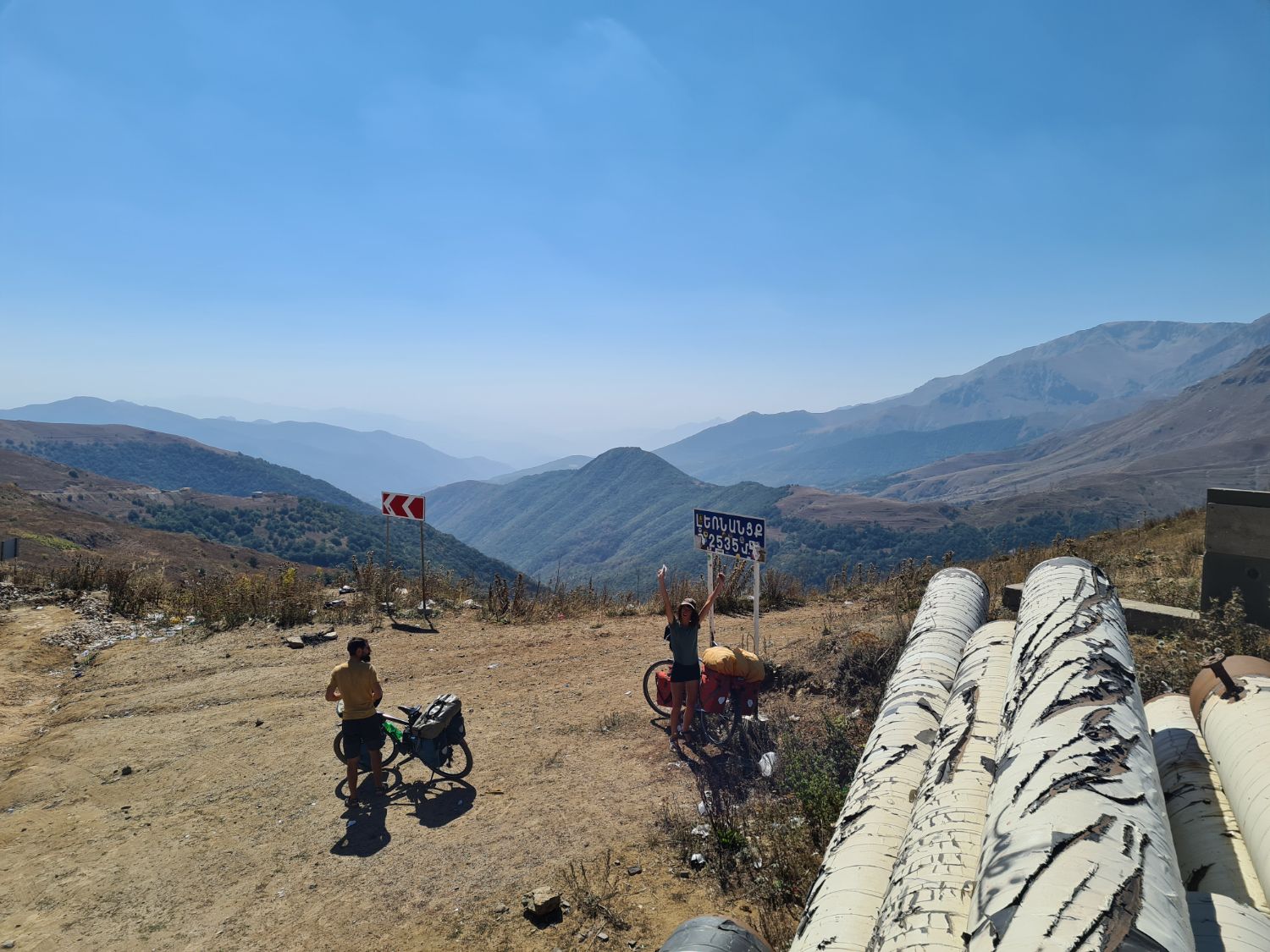 The last pass before Iran

Back in Turkey, it didn’t take long to decide that now we would cycle back all the way to Belgium since this was already our backup plan in case we couldn’t get into Pakistan. The question was more how? Which route were we going to take? We could’ve crossed Turkey, cycle the Balkans, then follow the Danube back to Western Europe. But we had already spent a couple of months in the Balkans with the camper van.

Instead we came up with a plan to stay as much south as we could by crossing the Mediterranean Sea by ferries until we reach Morocco. Thus, avoiding the cold (for now) and exploring places we hadn’t been before. 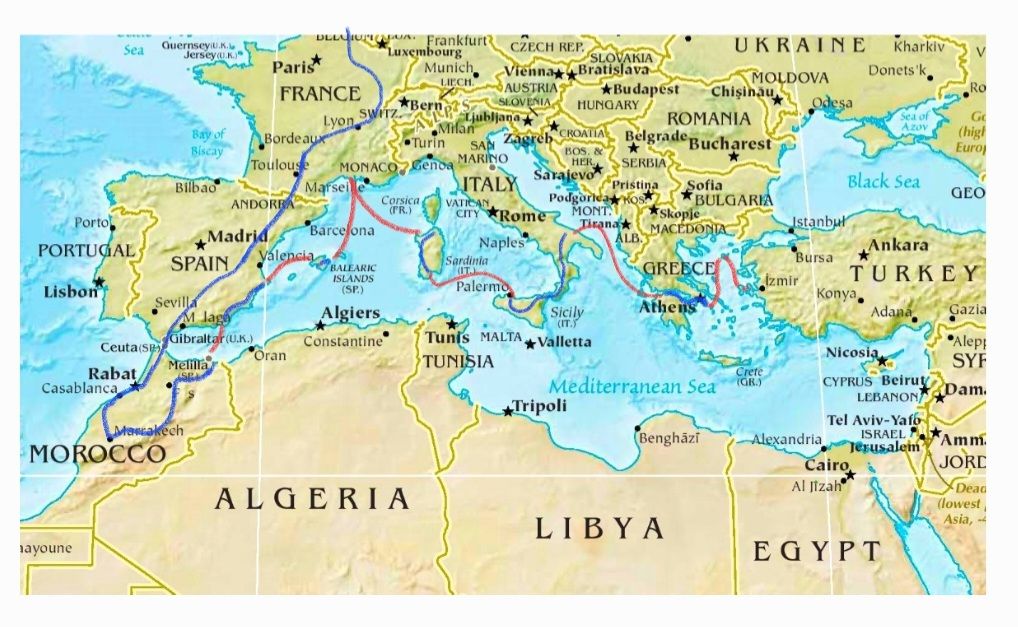 Right now, we already took 7 ferries to get to Italy, where we got to cycle through some beautiful old towns and follow some nice and quiet cycle routes. Despite what other cyclists told us, the drivers are careful and are very considerate of cyclists here! Next up is Sicily and Sardinia before we go to Spain.

We’re looking forward about the next weeks and we hope to put out more positive updates soon! See you in the next one. 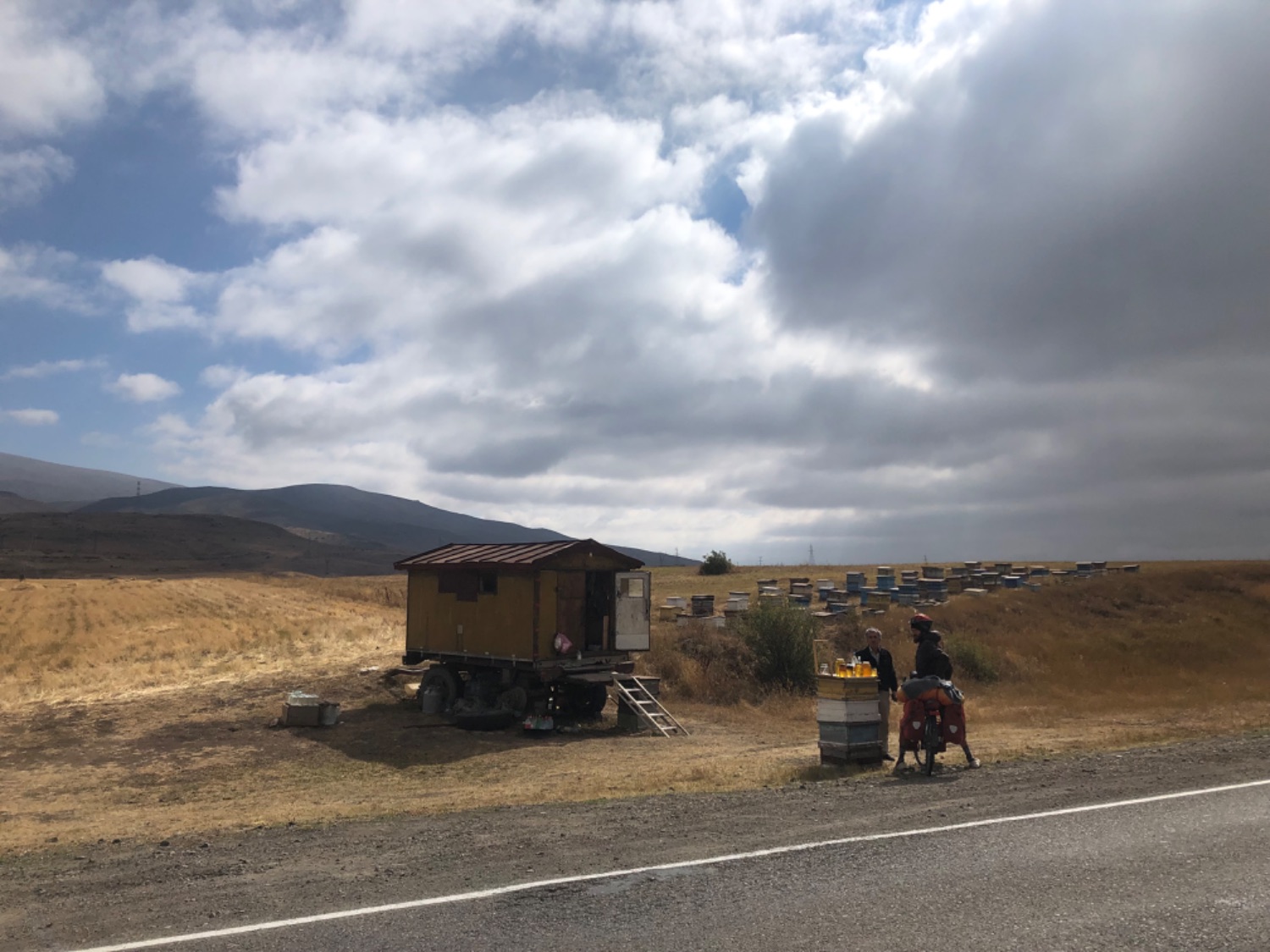 Buying some very good honey at the side of the road 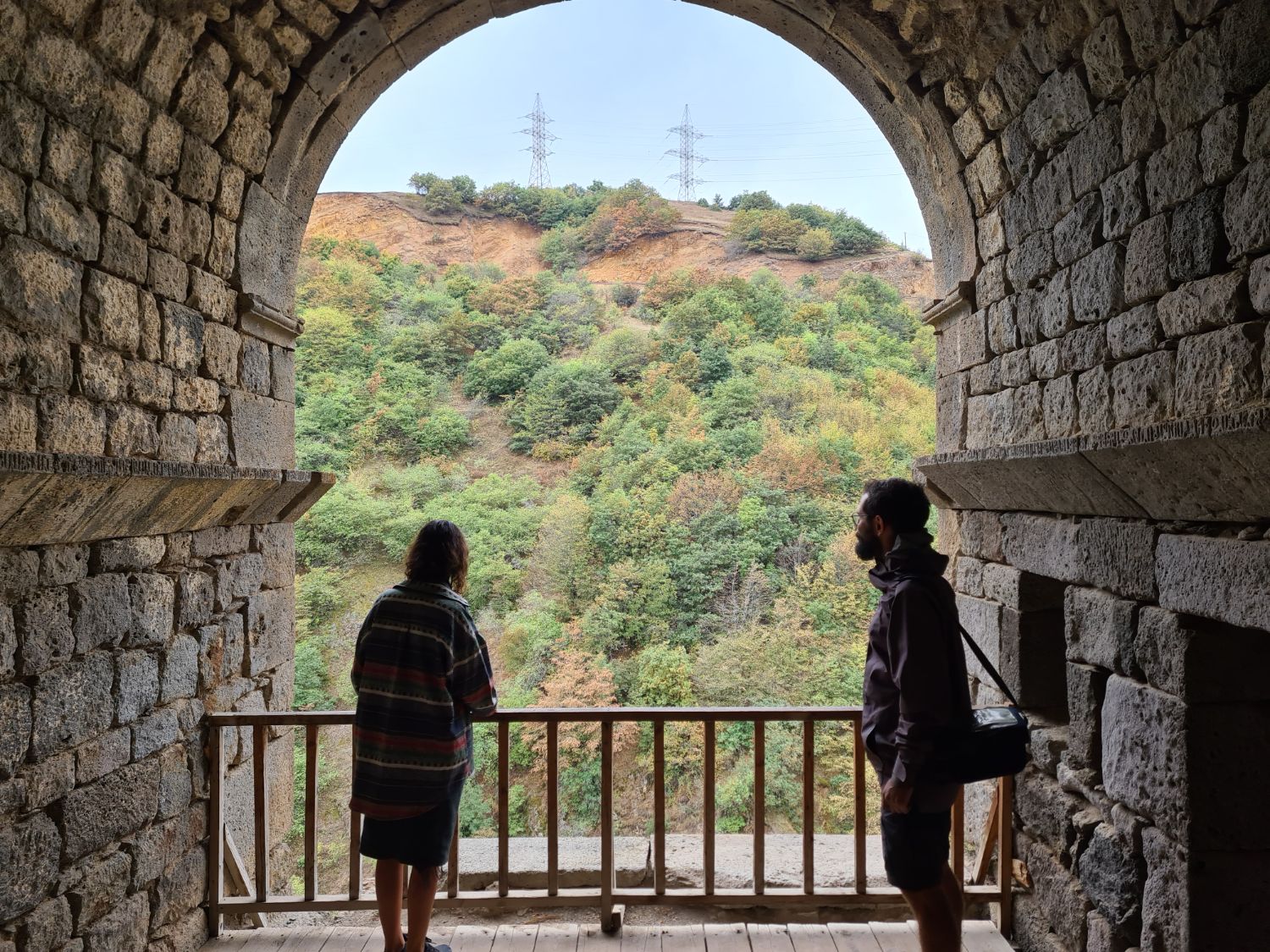 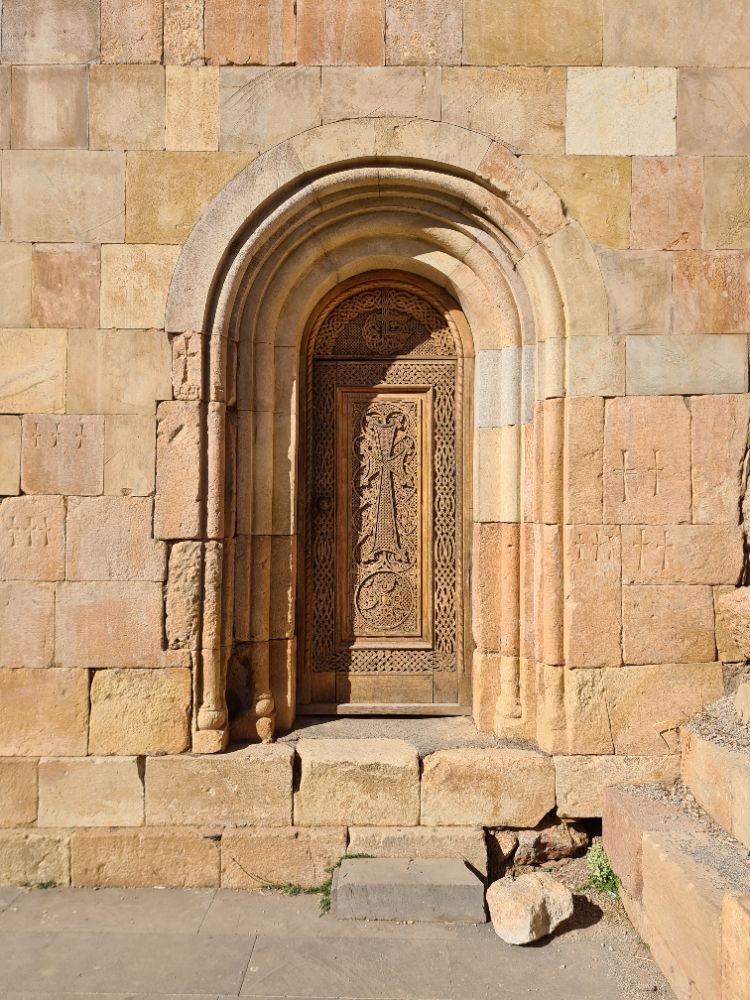 A door at the monastery

Freshen up at the lake while the temperature still allows it 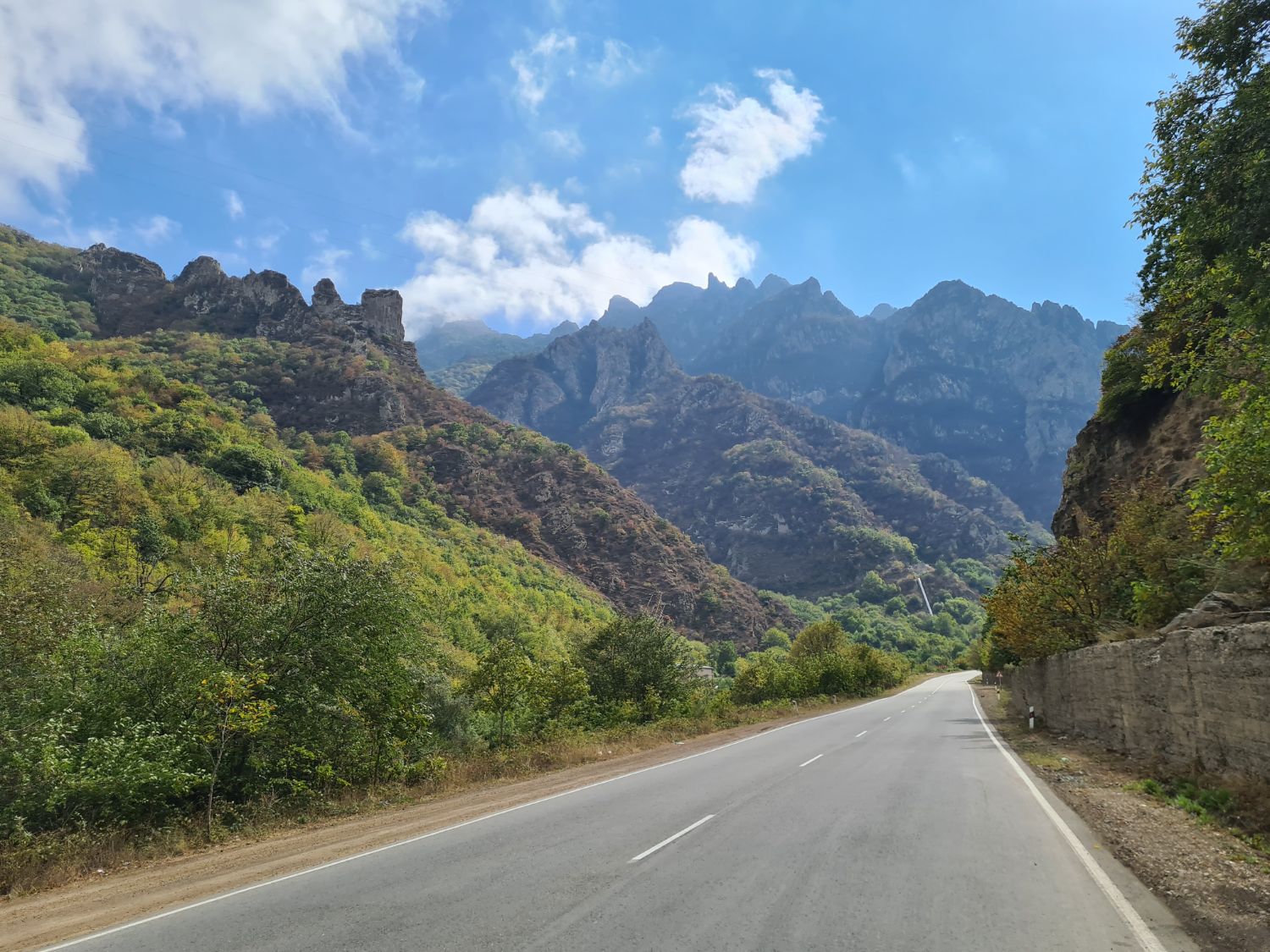 On the way to Iran